What’s next for Caroline Ouellette?

The former Stinger, Team Canada captain and Olympic gold medallist contemplates the future. PLUS: Watch her play at Concordia on March 29
|
By Tom Peacock 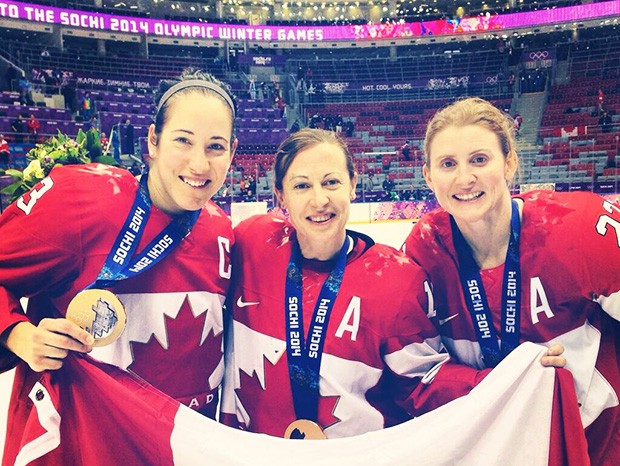 Is she ready to hang up her skates? Hardly. In fact, there’s still nothing the veteran forward would rather be doing than playing hockey.

“I think I might have a couple of more years of hockey in me, and it seems like they’ll get rid of me before the game leaves me,” she says laughing. Ouellette continues to play for the Montreal Stars of the Canadian Women’s Hockey League (CWHL).

Last year, the former Stinger took on assistant-coaching duties with the Concordia women’s hockey team, before leaving to train full-time with the national team in Calgary in preparation for the Olympics.

Given the opportunity, the native Montrealer says she would love to return to a coaching role with the university team. “I hope to meet with Les [Lawton, Stingers head coach] and Patrick [Boivin, director of Recreation and Athletics] in the next few weeks. I really enjoyed my time with the Stingers,” she says. “We’ll see if it’s possible for me to get involved next season and keep playing [with the Stars].”

In the meantime, Ouellette is back on the ice with the Stars with her eye on another CWHL championship. “I feel so lucky that I’ve been able to win the Clarkson Cup three times with the Stars, and I’d love to be able to do it again this year.”

Currently in first place, the Stars will wrap up their regular season with two games against the Boston Blades on March 8 and 9 at the Étienne Desmarteau Arena (3430 Bellechasse Rd., Montreal).

We never gave up

Looking back at Team Canada’s incredible comeback win against the United States in the gold-medal game in Sochi on February 20, Ouellette says her team was prepared for a battle. 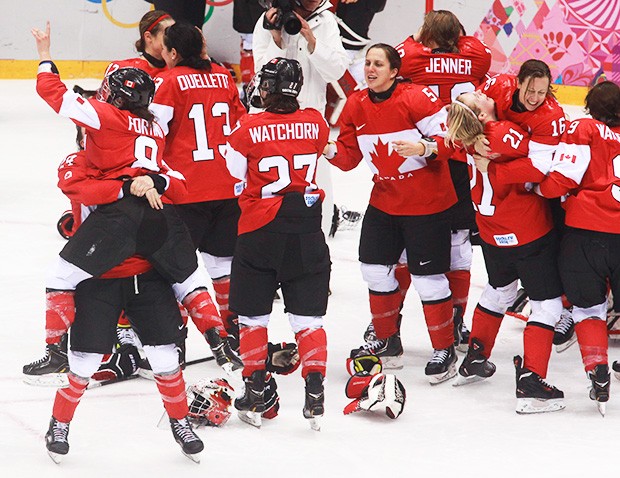 The Canadian women's hockey team in Sochi, moments after their comeback victory in the gold medal game. | Photo by Canada Olympic Committee (COC).

“We always know that when we play the U.S. it’s going to be a great game. They have a very good team with a lot of talent, and a lot of skill. We knew that we had to make sure we were the best prepared team,” she says.

Beating the U.S. earlier during the Olympic tournament’s preliminary round was a key confidence builder, she adds. “When we got to the final we knew that no matter what happened, we could come back in the game. We had come back from behind in the third in that first game, and we said, no matter what happens, we would never give up and we would fight until the end.”

The U.S. was up by one goal with less than a minute left to play in the final game. Millions of Canadians were on the edge of their seats when Quebec City native Marie-Philip Poulin scored to tie the game. Minutes later, during overtime, Poulin scored again to give Canada the gold medal.

“We knew that we could do it, we could come back,” Ouellette says. “And Marie-Philip, what an amazing player. What an amazing person. Two Olympic finals, four goals: that’s pretty much the greatest achievement in Olympic hockey, and it could not happen to a better person.”

Ouellette says it was an honour to wear the captain’s jersey in Sochi, particular given that 2010 captain Hayley Wickenheiser was on the roster. “It’s not the easiest thing to replace a captain that’s still on the team, but Hayley was absolutely wonderful, and she did a fantastic job at the OIympics. She’s an amazing leader for us, and she certainly made it easy on me.”

The response that Ouellette and her teammates have received from Canadian fans since returning from Russia has been overwhelming, she says. “So many people have talked to us about what the game in Sochi meant to them, and how much it inspired them.”

A tireless ambassador for the sport, Ouellette believes she couldn’t have asked for a better recruiting tool. “Out of the 13 million people that watched the game, we certainly hope that there are thousands and thousands of young girls who will want to play hockey,” she says.

When asked where the Sochi Olympics final stands among the many championships she’s played in, Ouellette is unequivocal. “It’s the greatest hockey game I’ve ever been a part of.”

See Caroline Ouellette and the Montreal Stars play a fundraising hockey game on March 29 at 1 p.m. at the Ed Meagher Arena (7200 Sherbrooke St. W.) on the Loyola Campus.

Ouellette will also address the crowd and be available for autographs.

For more information, stay tuned to the Stingers website.