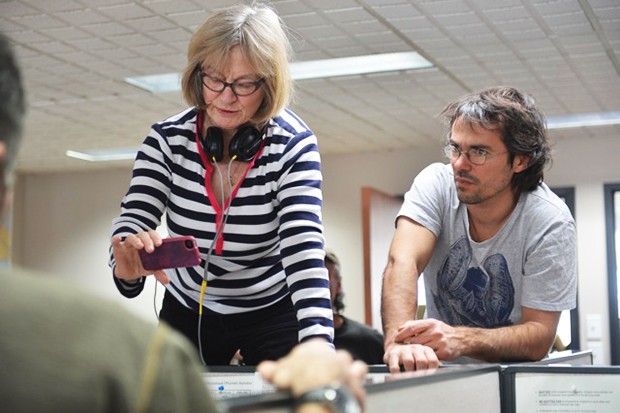 Micheline Lanctôt on the set of her next film, Autrui.

Micheline Lanctôt has been a constant, powerful presence in Quebec cinema for decades. The Concordia part-time faculty member has acted in dozens of films, and is currently working on her tenth as a director. On March 23, at the 16th annual Soirée des Jutra, Lanctôt will receive the province’s most important lifetime achievement award in cinema, the Prix Jutra-Hommage. We sat down with Lanctôt to discuss her professional life.

What’s the film project you’re most proud of?

I needed very badly to shoot that film. My last feature film had been Sonatine [1984], and I had done nothing since. I had made a TV movie, and a documentary for the NFB, but I couldn’t get my projects set up. So it was a desperate move. Actually, it was a little gang in my class who said, “You’ve got to do it. Let’s go! Let’s do it!” They really pushed me, and thanks to them I got the film going. I thought, if they think I can do it, I probably can.

The film was self-financed, and ended up costing $238,000. We shot it in 16 days, with three additional days of video shooting. I had never done that kind of production before. I had worked mostly in the industry, and that film introduced me to the so-called independent scene.

The film was voted Best Quebec Film at the Rendezvous du cinéma québécois, and it was invited to a lot of festivals. It was an enormous success.

What came after that?

ML: Actually, the film that I managed to set up right afterwards, La vie d’un héros [1994], was a terrible experience for me. It was a big-budget production. The shoot was really painful, and the film was terribly badly received, so I was on the penalty bench again for eight years.

It was the story of a German [Second World War] prisoner who worked for my father after the war before being repatriated. And when it came out I was called a Nazi, and a revisionist, which to this day I cannot fathom, because the film was exactly the opposite.

It was a terrible blow. So I decided I was going to stick to small stories and small budgets. Not only did I function better with small crews and low-budget projects, but I also never had enough clout as a film director to command big budgets.

So to this day, I’m still hovering around [film budgets of] $1 million to $1.8 million, and I find it a lot more convivial. I like small machines; I don’t like big machines.

You once said your subjects normally choose you? Can you give an example?

ML: Certainly. Le piège d’Issoudun [2003] was a film that existed for 15 years in my head before I had the guts to do it. It was a film about a woman who tries to commit suicide with her two children. The children drown but she survives, and throughout the whole film she tries to find somebody who will help her to complete her suicide. It was a very heavy subject, and I shied away from it for 15 years.

I wanted to make a film that was a slap in the face, because my point was that any society that allows women to do that is a bad society. And women are by no means crazy when they do that. They just reach a point of no return.

It was extremely difficult to shoot, and it was extremely difficult to edit, because I didn’t have any money to pay for an editor. I shot it on film and I edited it on film, so I was in a little dark room with my materials — 48,000 feet of film, for nine months, cutting and splicing. At one point I just gave up. I couldn’t live in that subject anymore, so I decided the film was over.

Of course, when it got released it was a complete box-office failure. I could understand why; the film was extremely disturbing! Some people who saw it were very moved by it, but it’s not a film that you want to take your girlfriend to after a hard day’s work. It’s not entertaining at all, but I’m very proud of it. I think it was an important subject, and I like the way I handled it.

How did you end up teaching at Concordia?

ML: Actually Tom Waugh [professor of film studies in the Mel Hoppenheim School of Cinema] got me in. He phoned me up and said, “Would you like to teach?” I said, “Yes, of course.” It was the beginning of a big love story for me, which is still ongoing. When I fall out of love then I’ll stop giving my classes.

Is there one piece of advice you give to all of your students who aspire to become filmmakers?

ML: Hang in there. That’s what I tell them. They get discouraged so easily. They put so much intensity into getting there, and of course, getting there is far from easy. I try not to discourage them, but I try to give them the most realistic picture of the industry. I tell them the average it takes for somebody coming out of Concordia to appear in the industry is 15 years.

It takes a long time, and only the most motivated actually get through that incredible incubation period. But I tell them they’re lucky, because there’s a Concordia network in the industry. There are Concordia graduates on all levels of a film set, and they’re usually very helpful to other Concordia graduates.