Inspiring the next generation of entrepreneurs

What does it take to start a business? A group from JMSB helped 11 high school students from Kahnawake find out
|
By Yuri Mytko 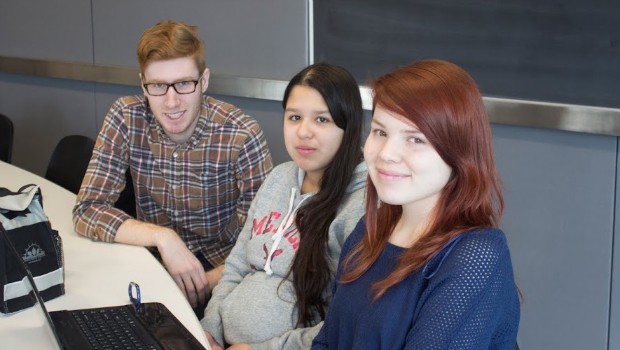 It’s never too early to learn about entrepreneurship. And for a group of high school students from Kahnawake, a Mohawk community south of Montreal, the opportunity came earlier this year, when a crew of Concordians organized a contest designed to show them what it takes to start companies of their own.

Over the course of two Fridays in January, 11 students from Kahnawake Survival School (KSS) participated in a series of activities that helped them conceive ideas for community-serving businesses.

“Even if these students don’t become entrepreneurs, the skills that they learn are still extremely useful: conducting research, developing an idea, building a structured presentation, public speaking and so on,” says project leader Julian DiBartolomeo.

DiBartolomeo, who is majoring in finance, headed a team of eight “coaches” from the John Molson School of School of Business (JMSB)  — all undergrads and members of the Concordia branch of Enactus, an international non-profit organization that mobilizes students to effect positive change in their communities, and encourages them to develop the skills of socially responsible corporate leaders.

In the first session, the Enactus Concordia group travelled to Kahnawake, where they spent the day with the First Nations community and held working sessions with the high school students to walk them through the key points of a business plan.

Afterwards, the KSS student teams started preparing PowerPoint presentations that outlined their own business plans. As the week progressed, the JMSB coaches checked in regularly to offer guidance.

Then came the moment of truth.

“The second Friday was a lot of fun,” says Ron Abraira, faculty advisor to Enactus Concordia and a full-time lecturer at JMSB. “The KSS students came to Concordia and presented their plans to a panel of judges made up of JMSB faculty members.”

The students’ trip also included a tour of the Sir George Williams Campus.

“JMSB’s history is very closely bound to the Montreal communities the school serves,” says JMSB dean Steve Harvey. “Our strong tradition of community service is an important part of who we are, and the communities we are involved with enrich our organizational culture in immeasurable ways.”

Abraira considers the RISE project a success. “I think it’s important to use non-traditional methods to expose adolescents to entrepreneurship, and also to what life can be like at university.”

Find out more about Enactus Concordia.