Discover the best of Quebec … at Concordia 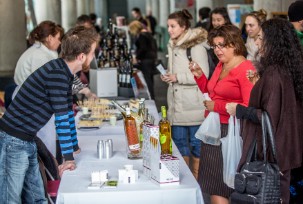 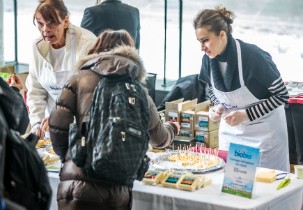 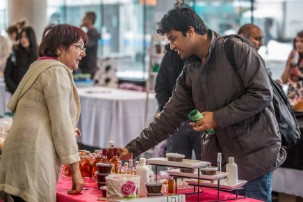 It’s not every day that a mobile sugar shack comes to Concordia.

But the Foire du terroir québécois — which takes over the atrium of the Engineering, Computer Science and Visual Arts Integrated Complex (EV Building) from March 19 to 20 — aims to do more than share cider, chocolate and other world-renowned products.

“We want to celebrate the French language within a vibrant, open and multicultural Montreal,” says Maria Trigueiro, administrator of the Département d’études françaises. “And we want to show that Concordia is very much a part of it.”

The food fair, which will welcome as many as 25 producers each day, is just one part of La Francofête à Concordia : laissez-vous tenter, a celebration of Quebec culture from Monday, March 17 to Friday, March 21.

While the Département d’études françaises has marked Francofête — a worldwide celebration that originated in 1997 — for several years, it wasn’t until 2013 that it partnered with the Oui Can Help! program to host events for the entire university community.

This year, the offerings have doubled. In addition to the popular Foire du terroir québécois, the event is showcasing the work of filmmaker Hejer Charf in a day-long series of screenings.

For Chanel Bourdon, the coordinator of Oui Can Help!, Francofête is a fun and inclusive way to promote not only the French language, but also Quebec culture.

La Francofête à Concordia highlights the university’s commitment to the province’s language and culture both internally and in the community at large. It also gives students from outside the province a new perspective on Quebec — and encourages them to plant roots in their adopted home once they have their degrees in hand.

“It’s a great way to get to know the province and all it has to offer, especially for international students,” says Bourdon.

Because they have the opportunity to apply for permanent residency upon graduation, Bourdon finds that “many of those students make learning French a priority.”

With that in mind, Oui Can Help! began hosting free conversation groups and activities for Concordians wishing to master the language in 2011, the same year the university’s French Language Bursary was established.

The bursaries — funded in part by the Government of Quebec, as well as Concordia — support international and out-of-province students as they study French in the Département d’études françaises.

In 2012 and 2013, a total of 257 bursaries were awarded. The Département d’études françaises also added 24 credits a year to accommodate an increase in registration.

As Bourdon notes, however, many Concordians are already well-versed in Quebec’s first language.

Before the 2013 Francofête à Concordia, some of the francophone food fair vendors feared they would struggle to communicate with their customers. “They were really surprised and very happy to see that that was hardly the case,” says Trigueiro.

This year, she and Bourdon expect more of the same, but on a bigger scale, and with greater interest from the Montreal community. As Bourdon points out, “If the public is aware and is looking forward to Concordia events every year, that’s going to be a great thing for us.”

Ultimately, the organizers hope that those who take part in Concordia’s Francofête have a good time immersing themselves in Quebec culture, through food and film.

The Hejer Charf film screenings — including the critically acclaimed Les Passeurs, along with the director’s shorts and documentaries — will take place on Tuesday, March 18 from 10 a.m. to 12:15 p.m. at the J.A. DeSève Cinema in Room LB-125 of the J.W. McConnell (LB) Building (1400 De Maisonneuve Blvd. W.) and from 2:30 to 5 p.m. in Room LB-612 of the LB Building on the Sir George Williams Campus.

Watch a video of last year’s Francofête celebrations at Concordia.