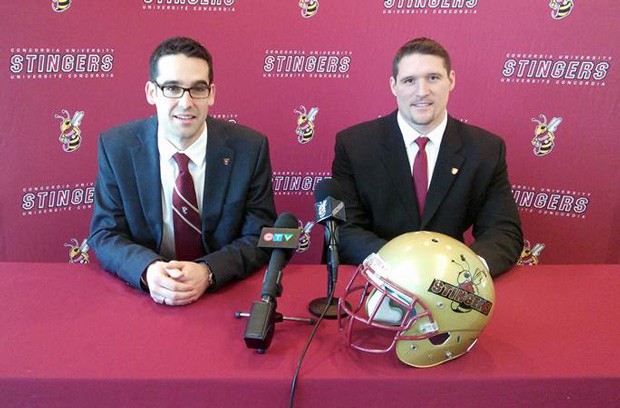 Director of Recreation and Athletics Patrick Boivin announced the appointment of Mickey Donovan as the new head coach of the Concordia Stingers football program on February 11.

“I cannot tell you how thrilled I am to have Mickey take over the leadership of the Concordia Stingers,” Boivin said. “I believe together we can take our team to the next level and give our student athletes a high quality university football experience, while ensuring their success on and off the field.

“He has impressed me with his passion for our institution and the program, his knowledge of the game and his insight into the reality faced by today’s student athletes.”

Donovan becomes only the fifth head coach in the 40-year history of Concordia football. He replaces Gerry McGrath who announced his retirement last fall after 22 seasons as an assistant coach and head coach with the Stingers.

"It feels like I'm coming home," Donovan said. "I think it's special to be back at my alma mater. I'm looking forward to making great things happen with the Concordia football program."

Donovan takes on challenge of head coach for first time

Donovan returns to his alma mater where he was one of the most accomplished players to ever wear the maroon and gold. He was a linebacker with the Stingers for three seasons – 2002 through 2004, and he graduated with a BA in Leisure Sciences in 2006.

He was a two-time Quebec all-star, a two-time Canadian Interuniversity Sport (CIS) all-Canadian and he won the Presidents’ Trophy as the top defensive player in Canadian university football in 2004. He closed out his career with 130 solo tackles and 46 assists for a total of 153 in just 19 games. He went on to join the CFL’s Hamilton Tiger-Cats in 2005, but suffered a knee injury ending his playing career the following year.

His coaching career started with an internship at the University of New Hampshire in 2006. He joined the Western Mustangs in 2007 to coach linebackers. During his four years with the Mustangs, he handled special teams, the defensive front seven and served as the team's recruiting coordinator.

Donovan, who was a guest coach at the Winnipeg Blue Bombers training camp in 2011 and the Toronto Argonauts in 2013, has also served as a special teams coordinator for the Canadian under-19 team at the 2009 world junior championship, as well as the defensive coordinator for Team Ontario West at the Canada Cup tournament in 2010 and 2011.

In November of 2011, Donovan joined the McGill Redmen program as assistant head coach and defensive co-ordinator.

He moves to Concordia immediately where he will take on the challenges of a head coach for the first time.