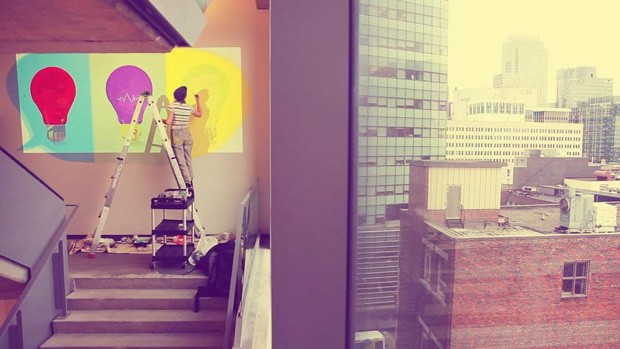 The stairwells in the John Molson School of Business (JMSB) Building just got a lot more interesting.

On February 6, the David O’Brien Centre for Sustainable Enterprise (DOCSE) at the JMSB is officially launching Be Moved By Art, an initiative to encourage fitness among the building’s occupants by decorating some of its unheralded corners.

“The idea is to get people using the stairs and to have them be inspired while doing so,” says David Lank, DOCSE program coordinator.

The JMSB Stairwell Art Gallery focuses on sustainability-themed images. According to Lank, “The project helps adopt the idea of sustainability into business culture and into the everyday lives of the students, faculty, staff and visitors that use this building.”

“Narratives, stories, music and images served to warn our early ancestors against predators and natural disasters,” he says. “Art helped them develop defence mechanisms. My colleagues and I believe that art should be used to deal with modern survival threats such as climate change and environmental crises.” 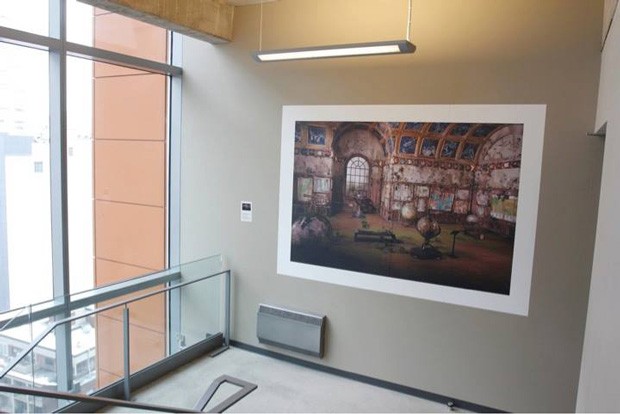 To curate the project, the DOCSE worked with Mouvement Art Public (MAP), a group that installs public art around Montreal. The MAP folks secured the necessary permissions to put up photographs by Lori Nix — a New York City artist whose work explores the concepts that the centre had in mind — in the north stairwell of the John Molson Building.

The DOCSE hopes to add more art in future. To that end, Concordia alumna Bronwen Moen, BFA (painting & drawing) 09, MFA (studio art) 13, has already contributed a mural tailored to the same themes in the south stairwell.

And, as Shrivastava explains, the John Molson Building’s stairwells were made to be used regularly.

“The architect’s original intention was to use them as a healthy alternative to the elevator,” he says. “The floor-to-ceiling windows allow dramatic and abundant natural light to flood the wide stairs and high ceilings. And the open spaces make them a spectacular venue for displaying art.”

Ultimately, Shrivastava says, “People will be inspired to walk up or down so they can discover and explore the works that await them. They can actually walk their way towards a healthier, more sustainable and creative life.”

The JMSB Stairwell Art Gallery opens officially with a vernissage on Thursday, February 6 from 10 to 11 a.m. The hour will include a group walk-up to the stairwells, and a Q&A session with Lori Nix and the project’s organizers. The event will begin outside the third-floor elevators of the John Molson School of Business (MB) Building (1450 Guy St.) on the Sir George Williams Campus.