Elements of charter clash with university’s values
|
By Media Relations 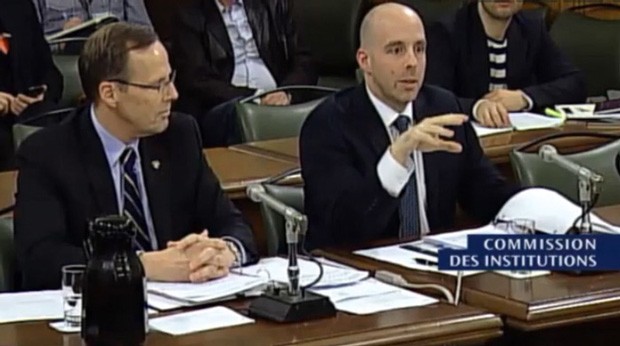 “We are proud of the diversity of our community and of the way we all work and teach together in harmony. We’re not comfortable with denying access to education because of the way people dress. We’re just not.”

That’s the message Benoit-Antoine Bacon, provost and vice-president of Academic Affairs, and Roger Côté, vice-president of Services, delivered on January 23 at the hearings on Bill 60 (charter affirming the values of state secularism and religious neutrality and of equality between men and women, and providing a framework for accommodation requests).

Concordia was the first university to present its position at the hearings on the controversial bill; a position developed after a lengthy and broad consultation with members of the Concordia community, and approved by Senate and the Board of Governors. More than 200 emails were also received from students, faculty, staff and alumni, with 98 per cent of those voicing opposition to at least some elements of the bill.

The session began with a 10-minute presentation delivered by Bacon followed by a 50-minute question and answer period with representatives from all four political parties in the national assembly.

Bacon focused on two elements of the bill – the restriction on the wearing of religious symbols and the issue of autonomy of universities in the matter of religious accommodations. He said both would have a negative impact on Concordia’s ability to attract and retain the best faculty and students in a highly competitive global environment.

During the question period, Bacon often quoted from impassioned emails, particularly from students who felt targeted for their religious beliefs; many of them having come to Canada to escape repressive regimes in their home countries. He also cited from the brief the Simone de Beauvoir Institute intends to present at the hearings. The highly respected institute, a leader in feminist research, is opposed to the bill saying it will actually hurt women rather than foster equality between the sexes.

Côté shared Concordia’s success in creating an inclusive, welcoming environment with processes that respect religious practices without infringing on others. He explained how the university handles religious accommodation and reinforced the fact that the university’s approach serves everyone well.

Bacon emphasized the importance of the autonomy of universities and challenged the notion that faculty and staff are employees of the state. “It is this autonomy that allows us the freedom to teach and conduct research and, in fact, criticize the state,” he said.