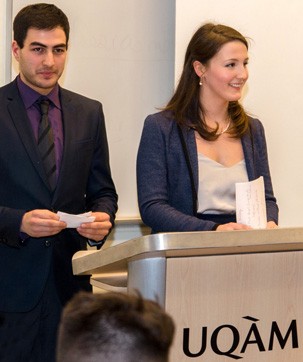 When Jessica Lelièvre first faced the raft of allegations she would have to answer to as mayor of Montreal — using drugs in city hall, sexual harassment, posting naked pictures on Twitter, corruption, money laundering — they gave her pause.

“I thought, alright, what do we do with this?” says the Concordia student and president of the Political Science Student Association (PSSA).

Fortunately, although loosely based on recent events, this was just a game: a press-conference scenario created by the organizers of this year’s edition of the Jeux de science politique, hosted by Université de Québec à Montréal (UQAM) earlier this month.

Representing Concordia’s PSSA team at the competition for the second year in a row, Lelièvre felt no pressure to resign from her fictional position as a result of the scandal.

Instead, she and teammate Vasif Aliev, playing the role of her press attaché, decided to confront the 11 allegations head-on, admit to some of them — including smoking pot at city hall to calm her frayed nerves — and flatly deny the rest. The judges awarded the Concordia PSSA team for its candour.

“I know that what distinguished me was that I went through each point specifically,” she says, adding that Aliev contributed some much-needed levity to her remarks. “He was very helpful in producing the text. I’m more of a formal person, but he has a better sense of humour.”

You can watch their presentation here.

To win the discourse category of the competition, Lelièvre and Aliev also had to hand in a critical response to an academic paper. The written document and their performance at the press conference earned them first place.

Lelièvre is doubtful she’ll ever have to face such an enormous scandal once she enters the real political world. “I have a good head on my shoulders. I don’t think I’d go in that direction.” She adds: “I don’t think we should have mayors who act that way.”

The Jeux de science politique is an annual francophone inter-university tournament that pits teams against each other in different categories, including debate, case study, discourse, quiz and sports. This year’s edition was organized under the theme of municipal governance and Quebec’s self-determination.

Are you interested in representing Concordia at next year’s edition of the Jeux de science politique? Contact the PSSA for more information.