Eric Weissman, a social scientist and doctoral candidate in Concordia’s Individualized Program (INDI), recently defended a dissertation on the relationship between housing and homelessness. He spent nearly 13 years researching and filming his subject matter — but before that, he experienced the life first-hand.

After completing his master’s degree in sociology at the University of Toronto in 1986, Weissman struggled with debilitating addictions and intermittent homelessness. Ten years later, with the support of friends and family, he was able to turn his life around and get clean.

This tumultuous decade informed Weissman’s next move. “I decided to channel what had been a personal disaster into a form of insight that would allow me to conduct ethnographic fieldwork in the area of homelessness,” he says.

That work would yield a video series and book chronicling life in two unique communities.

Weissman’s video project came first. In 2002, he turned his camera towards Tent City, a community of street people who set up temporary housing in an abandoned lot on Toronto’s waterfront. 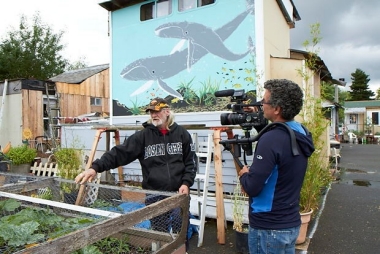 After the residents of this makeshift camp were evicted and placed in permanent housing, Weissman continued to document their stories of transition through photographs, video and written accounts. This proved the basis for Subtext: real stories, a series that followed homeless people as they adapted to housing in Toronto, Montreal and other cities in North America.

In 2009, Weissman came to Concordia to pursue a PhD in Special Individualized Programs (now INDI). He sought to expand on his work by comparing initiatives like Tent City and other state-sponsored housing programs with alternative forms of intentional communities.

“My doctoral work employs an interdisciplinary approach to critical and reflexive storytelling from the view of participants to understand how residents of such communities establish commitments to one another and housing activism,” Weissman says. “It’s about how self-worth and democracy go hand in hand and play a role in alleviating the conditions of chronic homelessness.”

These research interests took him to Portland, Oregon’s Dignity Village — the first municipally sanctioned public space governed by the formerly homeless. The area, which sits on the outskirts of the city, served as the site of Weissman’s fieldwork. It was championed as an example of a grassroots utopia and potential solution to homelessness throughout North America.

Weissman first visited the village in 2010. A year later, he returned to immerse himself in its daily life and capture the stories of its inhabitants. But instead of a shining example of housing activism, he discovered a community ravaged by drugs.

“Though founded in deeply democratic values, the village had failed horribly at giving residents the potential to find hope,” he says. “There were factions between villagers and a general incapacity to administer village affairs. Sadly, only around 18 per cent of villagers found stable housing once they left, and the rest returned to homelessness.”

Weissman’s time in Dignity Village yielded Dignity in Exile: Stories of Struggles and Hope from a Modern American Shanty Town. Filled with in-depth conversations, intimate photographs by Nigel Dickson and QR codes that link to videos, the book is an account of what went right and wrong in the encampment 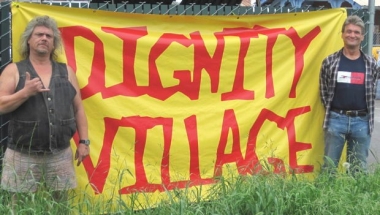 In spite of Dignity Village’s shortcomings, Weissman believes the model still has potential. “I think the village has to get back to its roots of active housing activism so as to integrate itself into Portland’s city politics,” he says.

But the idea might need some tweaking. “A hybridized form of self-governing in which village leadership, homeless advocates and city planners contribute to the political structure of the community is what I suggest as part of the solution.”

Weissman successfully defended his thesis in November 2013. For most of next year, he’ll be at the Institute for the Medical Humanities in the University of Texas Medical Branch, Galveston, Texas.

As a visiting scholar, he’s planning to co-teach courses in visual ethnography and ethics, and conduct a study of how viewers attach ethical commitments to their interpretation of images of poverty and homelessness.

This research “is an ongoing process,” Weissman said in Dignity in Exile. “It will likely never end.”