How to get a job at Google 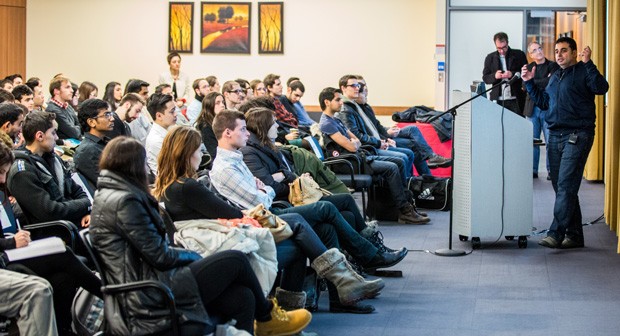 Shibl Mourad, Google Montreal’s site director, estimates that most of the projects the company works on “are hitting a billion people.” | Photo by Concordia University

While “googleyness” may not be a quantifiable quality, interviewers at the world’s largest media company know it when they see it.

According to Shibl Mourad, Google Montreal’s site director, “It’s very subjective.” He thinks it’s closely linked to an ability to help other people, to understand and learn from what they’re saying, and to collaborate.

On December 2, Mourad spent 45 minutes talking with a roomful of Concordia students about what it’s like to work for Google and how to successfully apply for a job at the company.

A successful software developer, Mourad runs the company’s 60-strong Montreal office — which boasts a music room, a climbing wall and the requisite foosball table. But he told the students there are perks beyond the famously free lunches and funky office décor.

“Google works on big problems.,” he said. “Most of the projects you're working on are hitting a billion people. If not, we're trying to get there by working on things that change people's lives, and change how people interact.”

It’s an inclusive approach starts at the top, Mourad says. “Much of the information about the company is shared with everybody. Even at the project level everything is transparent.”

The selection process is rigorous, and involves five separate interviews.

Much of Mourad’s advice was geared to software developers, but he says the application process is similar for candidates who want to join the company’s business development team. “If a recruiter tells you there are no jobs in Montreal, tell them, ‘That’s false. I heard Shibl speak, and he says there are always jobs in Montreal!”

1. Make sure you have a strong GPA

“Your GPA matters, especially your marks in the topics that are relevant to the job,” Mourad says. “If you’re applying to be a software engineer, you really need to have an A in algorithms. This is probably the most important.”

“Joining an open-source project is a great way to get experience and exposure. Because people are going to check your code, and you’ll learn all about the development process.”

“The ability to collaborate is very important for getting you through the door, and afterwards to succeed at Google.”

4. Be prepared for the interview

“The real interview begins when they give you a problem and you have to code it … It may be quite simple, but it’s probably a question that requires a lot of thinking to come up with the algorithm.”

To apply for jobs or internships at Google, to visit the Montreal jobs page and the students job page.