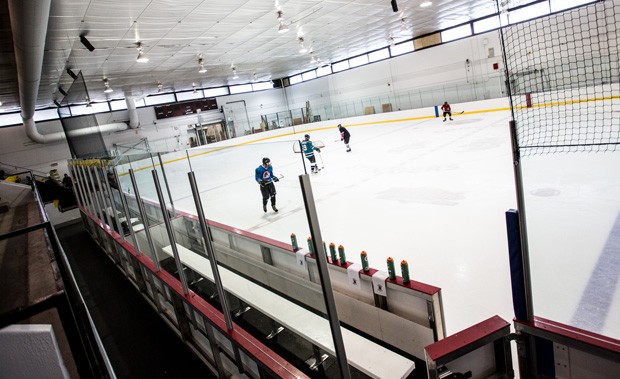 The Ed Meagher Arena — home of Stingers hockey and community sports — has never looked so good. The 47-year-old Concordia institution officially reopened this month after a National Hockey League-level overhaul.

Thanks to a $3.25 million grant from the province’s Quebec Municipalities Infrastructure Program, along with $4.5 million in university funding, the complex is now 2,500 square feet bigger and hockey-friendly for 11 months a year. It boasts a rink that meets professional standards, right down to the curvature of its boards.

“Having an NHL-standard rink is not the norm at the university level, so there’s a lot of buzz,” says Patrick Boivin, director of Recreation and Athletics. Boivin spent three seasons as director of hockey operations at the Montreal Canadiens before coming to Concordia.

The refurbished Ed Meagher Arena is also “green,” with a state-of-the-art carbon dioxide refrigeration system, upgraded windows and better insulation, as well as new ventilation and dehumidification systems. The old locker rooms have been renovated, and two new ones added.

While the rink previously operated for seven months of the year, its improved insulation boosts that number by 60 per cent.

“The investment demonstrates Concordia’s commitment to varsity sports,” says Boivin. “A big part of being successful is getting full engagement from your players, and there’s a sense of pride among our Stingers in calling this arena their home ice.”

The university is equally proud of the 1,000-seat arena. The new refrigeration is both safer and less expensive to use than the old ammonia-based system.

“We now have a brand new environmentally friendly and economical system that was developed here in Quebec,” says Peter Bolla, associate vice-president of Facilities Management. “It uses carbon dioxide, which is non-toxic, and requires less maintenance.”

More than 40 varsity, intramural and community teams use the Ed Meagher Arena. The Loyola Campus facility also plays host to Loyola High School and the public at large, making it a sports hub not just for Concordia but for the city’s Notre-Dame-de-Grâce and Montreal West areas.

The men’s Stingers play Brock University on Friday, November 22 at 7:30 p.m. and York University at 2 p.m. the following day. In women’s hockey, Concordia takes on Queen’s, Ottawa, Ryerson, York and Carleton universities at the Theresa Humes Tournament from January 3 to 5, 2014.

The Ed Meagher Arena is located at 7200 Sherbrooke St. W. on the Loyola Campus at Concordia University.

Check out the related videos, media kits and archival photos.