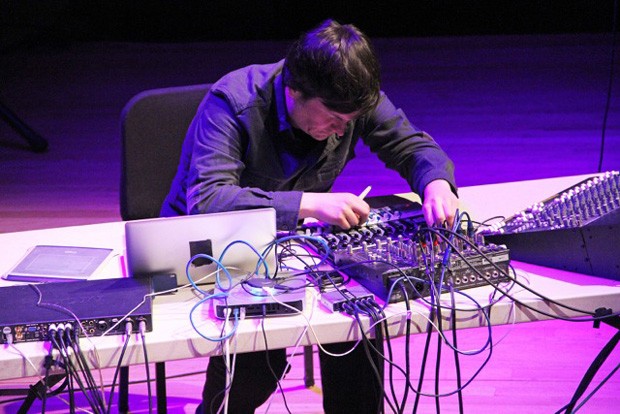 Electroacoustic musician and research Doug Van Nort at the controls during a live performance. | Photo by Doron Sadja

The Government of Canada awards 70 Banting Fellowships annually through its research granting agencies. The fellowships provide postdoctoral scholars with a $70,000 annual stipend for two years to pursue their research.

“It’s an opportunity to scale up my work, and bring it into an environment that’s really rich in terms of all the avenues of sound, media, interaction and computation going on here,” says Van Nort, who holds a PhD in music technology from McGill University.

Van Nort grew up in rural New York, where, he recalls, the sound of crickets was only occasionally interrupted by a dog barking or a car going by. These sounds, the ones you hardly hear unless you’re really listening, are the source material for his “immersive and visceral sonic experiences,” he explains.

Top 40 this is not. Van Nort’s electroacoustic compositions and improvisations are likely to have a lot more in common with the thrumming and sporadic knocking sounds emanating from, say, a faulty central heating system than with the latest Taylor Swift hit. He sculpts environmental sounds, decontextualizes them, then makes them beautiful in a very avant-garde way.

“In the past, my mom has told me that some of my pieces sound perfect for soundtrack music, particularly for horror or sci-fi,” he says with a smile, admitting that his chosen aesthetic area “might not be everyone’s cup of tea.”

Over the last few years, Van Nort has focused much of his creative energy on live improvisations, performed with his own custom-built systems. The software platform he created, called GREIS, allows him to produce “on-the-fly spectral and textural sound transformations and manual shaping of sound materials.”

His performance set-up consists of a couple of mixers, a laptop and a Wacom graphics tablet and stylus. “I’ve been performing with the same $90 graphics tablet for 10 years now, using it as an input device,” he says. “I like this idea of being able to make expressive, aesthetically pleasing sound instruments — or computational instruments — that work with these ubiquitous, simple technologies.”

For his postdoctoral research project, funded by the Banting Fellowship, Van Nort wants to see if he can turn his custom-made music machines into devices capable of interpreting and interacting with sounds created by human musicians on stage, and improvising right along with them.

Two months into his fellowship at Concordia, Van Nort’s days are filled with meeting people, planning and giving workshops, and writing and reviewing papers. (He’s an assistant editor of MIT Press’ Computer Music Journal.) Yet he’s got big plans for collaborative performances, which will be part artistic product and part scientific experiment.

“How can machine partners attend to the entire sound world in which they are placed?” he asks. “How can a machine understand sonic patterning over time? Our acoustic world is a highly structured ecosystem, which imprints on the back of our minds. How can machines be given such a ‘listening mind’?”

Van Nort is excited about being able to pursue his research into “collective, free improvisation as mediated by machine intelligence” at Concordia’s Topological Media Lab, because it will allow him to collaborate with other sound as well as media artists.

“I’m interested in the way that the research-creation environment of the Topological Media Lab works as a collective, focusing on architectural-scale environments, making them somehow responsive,” he says. “They have techniques and pieces that are more installation than performance.”

Of course, Van Nort adds, he means that only in the most positive sense. “Distractions are in fact the emergence of new opportunities — the things that end up being the grand and amazing piece,” he says. “This is at the heart of creative collaboration across disciplines.”

Listen to selections of Van Nort's music and read some of his scholarly articles.