The dark side of black metal music 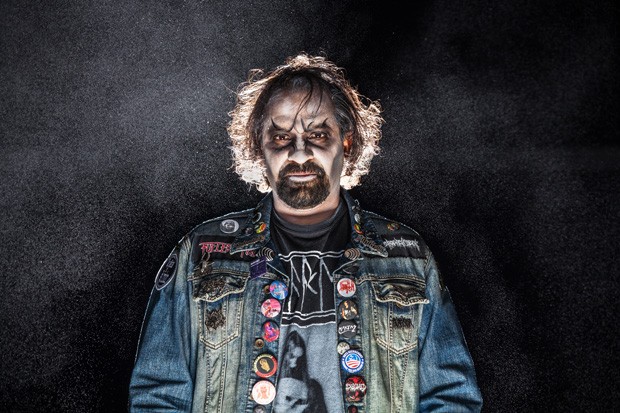 Vivek Venkatesh is an associate professor in Concordia’s Department of Education as well as associate dean of Academic Programs and Development in the School of Graduate Studies. He’s also a member of the black metal music scene.

With Halloween around the corner, it’s not unusual to see corpses walking down the street. For some members of the black metal1 music scene, however, that style of dress is a daily uniform.

Beneath the face paint are people from all walks of life, yet in a small but vocal minority of black metal fans there lurks an undercurrent of xenophobic beliefs propagated by online interactions.

1. black metal /blæk ˈmɛtl̩/ n. — a type of heavy metal music typically characterized by a fast tempo, heavily distorted guitars, shrieked vocals, and a lyrical preoccupation with evil and suffering, often with references to the occult or Satanism. (For an example see Taake’s classic video for Nordbundet, below.)

Vivek Venkatesh, an associate professor in Concordia’s Department of Education, sheds light on the dark side of black metal in a chapter appearing in a forthcoming peer-reviewed book, Educational, Psychological, and Behavioral Considerations in Niche Online Communities (IGI Global).

His research into the proliferation of xenophobia in online blogs and forums by black metal scene members can serve as a cautionary tale for society at large of how otherwise self-contained racist chatter could influence the larger public to consider adopting racist ideologies.

A member of the black metal music scene himself, Venkatesh is uniquely positioned to investigate a music genre that is as much about individual experience as it is about screeched vocals and rapid-fire drumbeats.

Those voices are often focused on the core themes of black metal: hostility, suicide, violence and solitude — as well as Satanic and anti-Christian ideologies. When these themes are coupled with imagery of harsh Scandinavian winters typically evoked in the lyrics of black metal (a music genre whose second wave saw the light of day in Norway and Sweden), a bleak outlook on life emerges.

For Venkatesh — and for many members of the black metal scene — such themes are cause for reflection and introspection. But for a xenophobic subgroup of black metal music fans, these ideas represent an excuse to propagate negativity.

This is especially true when the Scandinavian premise is taken further than the invocation of a wintry landscape when coupled with existing socio-political conditions such as multiculturalism and immigration policies; for example, black metal’s roots can carry a mythology that appeals to white supremacists because of a call for a self-governing society with pagan ancestry.

“This point of view in no way represents all black metal scene members,” Venkatesh is quick to say. “But an important subgroup is finding a stronger voice through open online forums that allow individuals to interact with like-minded people and influence others. Take this along with the solipsistic focus of the black metal scene, and xenophobic sentiment becomes something freely expressed and often supported.

Venkatesh hopes his work will remind members of the black metal scene that, he says, “Even though the focus on the individual is important and the anarchic sentiment of black metal is a defining trait, scene members have a responsibility to stand up against racist acts and denounce those who use black metal as an excuse to propagate hate speech.”

About the research: This chapter was co-written with professor Jeffrey Podoshen of Franklin & Marshall College in Lancaster, Penn.; metal journalist David Perri, who holds an MA in public policy and public administration from Concordia; and Kathryn Urbaniak, who holds an MA in educational technology from Concordia. It will appear in Educational, Psychological, and Behavioral Considerations in Niche Online Communities, co-edited by Venkatesh, fellow Concordia professors Juan Carlos Castro (Department of Art Education) and Jason Lewis (Department of Design and Computation Arts), and Jason Wallin from the University of Alberta.