Gerry McGrath is hanging up his jersey after 14 years, but will continue to support football program
|
Source: University Communications Services 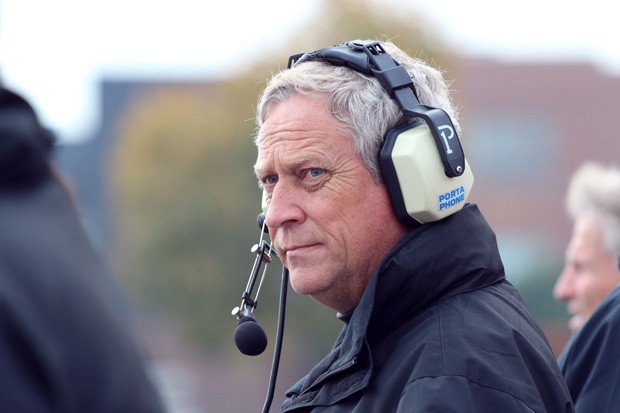 Gerry McGrath’s career has spanned 22 years at Concordia, including 14 years at the helm of the football program.

On October 26, after the last game of the season for the Concordia Stingers football team, Gerry McGrath announced he is retiring as the team’s head coach.

“I would like to thank Gerry for his long and distinguished service to Concordia and his contributions to one of our key varsity sports programs,” said Deputy Provost Lisa Ostiguy. McGrath’s career at the university has spanned 22 years, including 14 at the helm of the football program.

However, the university will still benefit from McGrath’s knowledge and expertise, says Patrick Boivin, director of Recreation and Athletics. “Gerry has greatly influenced the development of our program and he will be instrumental in supporting our efforts to prepare for the 2014 season and in looking at how we can further develop our football program,” he explained.

McGrath took over the reins of the Concordia Stingers in the 2000 football season after serving as offensive coordinator for eight seasons. He is regarded as an offensive genius, especially when it comes to the passing game. His innovations as a coach at the junior and semi-professional levels have heavily influenced the game in the province of Quebec.

“His knowledge of the game and his coaching style has allowed many of his players to achieve great success at the professional level,” added Boivin.

The search for a new head coach will begin in the off-season.