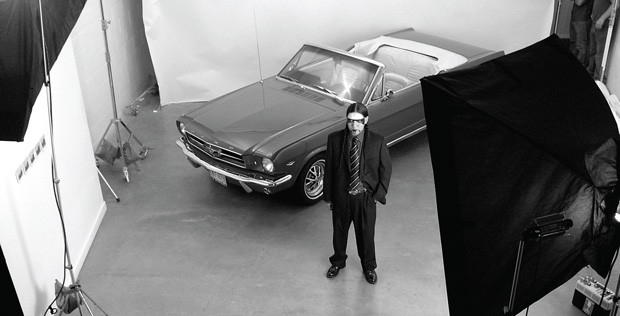 Joseph Paul in On Set: The Mustang Suite (2013), Dana Claxton’s six-hour single-channel video about the making of her Mustang Suite photo series. The series was originally commissioned by the Alternator Gallery in 2007; it is currently being featured in the group show Beat Nation at Musée d’art contemporain de Montréal. | All photos courtesy of Dana Claxton

Beat Nation is the hottest ticket in town: a trailblazing collection of young, urban, Native American art. The exhibition at the Musée d’art contemporain de Montréal (MAC) hails from Vancouver's Grunt Gallery and bills itself as an exploration of “art, hip hop and aboriginal culture.”

When Monika Kin Gagnon, a professor in Concordia’s Department of Communication Studies, discovered that it was coming to Montreal from October 17 to January 5, she was intrigued.

“I think the general public is ready for a thought-provoking, challenging group show that invites us to think about the intersection of art, hip hop and aboriginal culture from a generation of native artists that has grown up in the post-McLuhan era of pop culture and (social) media,” Gagnon says.

She invited Hunkpapa Lakota artist and Beat Nation contributor Dana Claxton to premiere a video — On Set: The Mustang Site — at Concordia’s Media Gallery this week, with an eye to creating “a unique type of resonance” with the MAC exhibition.

Tell us about On Set: The Mustang Suite. How is it connected to Beat Nation?

Monika Kin Gagnon: When I was talking with Dana about a year ago, she mentioned to me that she had shot footage during The Mustang Suite photo session, and was interested in revisiting and editing it into a piece.

The small space of our Media Gallery seemed like the perfect venue and opportunity to exhibit such a work simultaneously with the MAC show. Viewers can see Dana’s film, then go down to the MAC and see the final photographs. They are very majestic — 4 feet by 5 feet [1.2 metres by 1.5 metres].

So I encouraged Dana to work with the “making of” footage, which she has done in a wonderful and wily, unpredictable way. I wasn’t expecting a six-hour durational video!

But now it makes complete sense. It is an especially unique fit for our Department of Communication Studies, where most of our students are involved in the processes of making media — both its excitement and its tedium. We’re so used to seeing those frenetically paced “making of” videos that are really just about promotion, but with On Set, it’s about contemplation and observation and process. 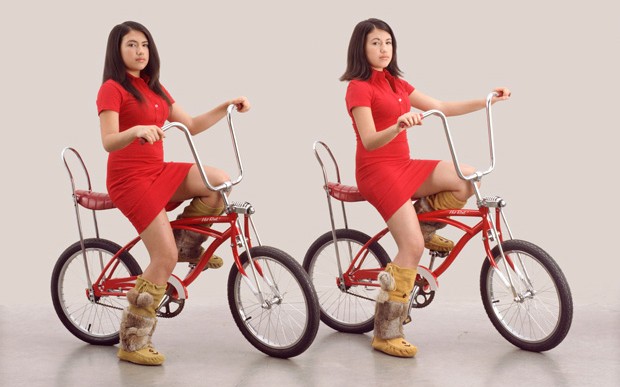 What is the video, exactly?

MKG: On Set takes us right into the making of the five glorious photographs in The Mustang Series.

It’s as if the viewer is spending the day on set with Dana and her actors and crew. You begin as the photographer and assistants set up the studio, lights and cameras; then the actors come in one after another to shoot the photos. It’s almost like visiting a film shoot. It has its lulls, where nothing much is happening, and then every once in a while, you get to see something amazing — like when the real Mustang horse is brought onto the set by his wrangler.

Dana’s photographs play with the entanglements between traditional native and popular culture, so we are already in a complex temporality, or sense of time. Popular cultural representations still insist on dominantly placing native people into a historical time, as if they are forever in the past, whereas Dana’s photographs bring this native family and their desires into the present of pop culture.

Once you settle into the expanded time and rhythm of the video, you start getting into it. 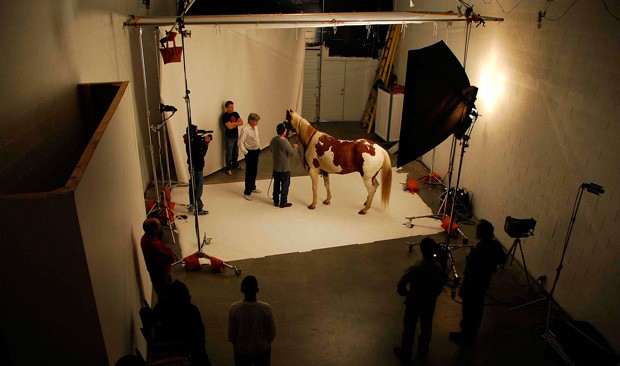 What can visitors expect to see at the Media Gallery?

The video is projected onto one large wall, and we’ve brought in some comfortable beanbags — this was MAC curator Mark Lanctôt’s brilliant suggestion — so viewers can settle in to watch for longer than they might if they were standing up.

We’ve scheduled one screening per day that will begin at exactly 10 a.m., so viewers can come back another day and see another portion of the video. We don’t expect anyone to view the whole video in one sitting!

Screenings of On Set: The Mustang Suite will take place every day from 10 a.m. to 4 p.m., from October 16 to December 13, 2013. Viewers are invited to revisit the video many times. The Media Gallery is located in Room CJ-1.419 of the Communication Studies and Journalism Building (CJ Building, 7141 Sherbrooke St. W.) on the Loyola Campus.