UPDATE: The Stingers won the semifinal game 38-3 against Université Laval's Rouge et Or on October 19. Cheer them on at the Quebec university women's rugby championship this Friday, October 25, at 7 p.m., at the Concordia Stadium (7200 Sherbrooke St. W.), Loyola Campus.

After finishing their regular season with a 7-0 record, the Stingers are confident they’ve got a shot at this year’s national championships. | All photos by Brianna Thicke

Despite the screams of eager Gaiters fans — “Go for the knees!” and “Bring her down!” — the Stingers were up by 14 points at the game’s 10-minute mark.

Afterwards, they joked about the challenges facing the team, but were quick to express their confidence in its prospects, both in the Réseau du sport étudiant du Québec (RSEQ) and at the Canadian Interuniversity Sport (CIS) championships.

“The biggest motivating factor for me is that this year, we have a good chance of going all the way,” said scrum-half Samantha Bennett, one of the star players. “Not just in RSEQ but in CIS. I see it as a real possibility that we’ll be in the finals, and even take gold. That’s our goal right now.”

The Stingers face Université Laval in the RSEQ provincial semi-final at home on Saturday, October 19 at 7 p.m.

It’s a team that shines on and off the field. Before Thursday’s game, players gathered around a table outside the athletics cafeteria, practicing plays out loud, and teasing their teammates and other Concordia athletes.

“Our fan base is our fellow Stingers,” said Bennett. “We’re a big community and we support each other.” 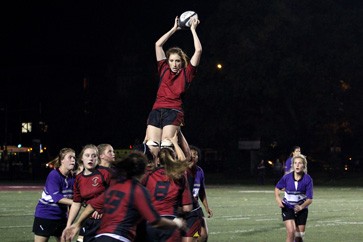 Ciara Brisco in action against Bishop's University on October 10. The Stingers won 77-0.

By halftime, the Stingers were leading 45-0. At play, it’s their fearlessness, motivation and team coherence that stands out. Each player works to the best of her ability, regardless of who she’s playing.

“Fear of losing is a huge motivating factor,” said coach Graeme McGravie. “We’ve been winning, so there’s a legacy there of winning, and commitment, and being the better team.”

The team lost three veteran players this season, leaving space for others to move up.

Fly-half Alexandra Tessier, a first-year player, is a top contender for rookie of the year. After playing for Quebec last summer, Tessier wants to play as well as basketball at Concordia.

“What I like about this team is that it’s not just because you’re a third- or fourth-year vet that you have a spot. In practice, it’s competition — and in games, it’s the same thing. If you compete in practice, it means you get to start,” said Tessier.

“We’ve been really lucky with rookies this year,” said Hughanna Gaw, the captain and a team member of four years’ standing. “They don’t really need that much guidance. They’ve been able to step in and fill the roles.”

According to Gaw, there’s skill and spirit involved. “It’s so exciting that everyone is putting so much effort in, because we can actually see winning the national championships as a realistic goal this year.”

McGravie agrees: “Win it all, that’s my prediction. It’s ours to win.”