This week at Writers Read: a Man Booker nominee and “Canada’s scariest writer”

On October 10, Irish-born Donoghue is stopping by the Henry F. Hall Building for a public reading, followed by a Q&A. Pyper was in The Floating Box in the John Molson School of Business Building on October 8.

Here’s a taste of Room (HarperCollins Canada), Donoghue’s seventh novel, which was shortlisted for the 2010 Man Booker Prize.

When she spits the second time it’s my go with Toothbrush, I scrub each my teeth all the way around. Ma’s spit in Sink doesn’t look a bit like me, mine doesn’t either. I wash them away and make a vampire smile.

“Argh.” Ma covers her eyes. “Your teeth are so clean, they’re dazzling me.”

Her ones are pretty rotted because she forgetted to brush them, she’s sorry and she doesn’t forget anymore but they’re still rotted. 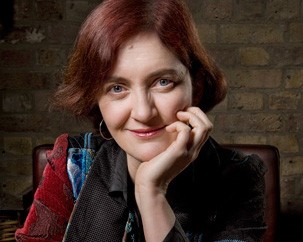 I flat the chairs and put them beside Door against Clothes Horse. He always grumbles and says there’s no room but there’s plenty if he stands up really straight. I can fold up flat too but not quite as flat because of my muscles, from being alive. Door’s made of shiny magic metal, he goes beep beep after nine when I’m meant to be switched off in Wardrobe.

There’s a little bit of light at Skylight’s top, the rest of her is all dark. TV snow’s white but the real isn’t, that’s weird. “Why it doesn’t fall on us?”

“Because it’s on the outside.”

“In Outer Space? I wish it was inside so I can play with it.”

“Ah, but then it would melt, because it’s nice and warm in here.” She starts humming, I guess right away it’s “Let It Snow.” I sing the second verse. Then I do “Winter Wonderland” and Ma joins in higher. We have thousands of things to do every morning.