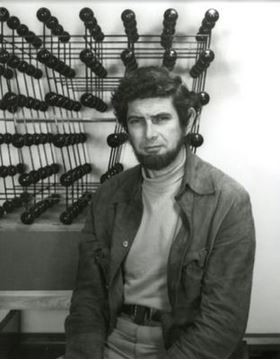 Hugh McQueen — a professor emeritus in engineering and one of Concordia’s most familiar faces — started working at the age of nine, delivering beer and food for a corner grocery store. He’s worked pretty relentlessly ever since.

McQueen was born in 1933 in Alloa, Scotland; a town near Glasgow. He moved to Montreal in 1942, at the height of the Second World War. During the crossing, his ship was torpedoed by a German U-boat: a Canadian corvette rescued the passengers and escorted them to safety. McQueen’s father stayed behind in Scotland for a further six years, but was legally prohibited from sending money to his wife and children. In their new home in Montreal, the McQueens were dirt poor — so Hugh got a job with the grocer.

How will he be marking his 80th birthday on September 29? Not surprisingly, with work. The professor emeritus of materials and manufacturing in mechanical engineering is currently finishing a conference presentation that is due on October 1, a history of forging from 5000 B.C. to the present.

“I’m going to celebrate my birthday on November 25 — St. Andrew’s Day,” he says. (Saint Andrew is the patron saint of Scotland).

McQueen’s career spans the last half-century. He earned degrees from Loyola College (before it merged with Sir George Williams University to form Concordia University in 1974), as well as from McGill University and Notre Dame University in Indiana, McQueen became a Concordia faculty member in 1968.

He witnessed and helped create remarkable change in that time, including the launch of the university’s first graduate program in engineering in the early 1970s. “All of the courses were offered at night,” he says. “The other big schools — École Polytechnique and McGill — didn’t offer that.”

This was emblematic of the role McQueen played in helping Concordia stake out unique turf where it could innovate and thrive. Later, he became the leader of this university’s initiative to give engineering students an understanding of the social aspects of their chosen field. He was attentive to the news topics of the day and brought them into the classroom: in 1973, when the oil trading countries in the Middle East halted shipments to North America and drove prices skywards, McQueen started teaching energy strategy.

McQueen still cycles to work every day from his home in Notre-Dame-de-Grâce — in fact, he has ridden the same bicycle for more than 50 years. He is deeply committed to environmental issues and sustainability. In addition to a number of academic honours, McQueen won the 2010 Sustainability Champion Award at Concordia.

Outside of his research area of metallurgy, in which he has put out close to 500 publications, McQueen is a history buff. He is probably the most knowledgeable person alive about Montreal’s 154-year-old Victoria Bridge. The professor emeritus and his wife Josephine have six children (three of whom studied at Concordia) and seven grandchildren.

When McQueen reflects on all the changes he has seen, what stands out is the profound difference in technology. “In my home, until I was 16, there was no TV, just two radios — one in the kitchen and one in the living room.”

Fast-forward to 2013, when televisions and, of course, the internet are ubiquitous. “My grandchildren are very into computers,” he says, admiring their ingenuity. “They are pecking at the iPads, but I don’t even know which side of an iPad to look at!”

What technology certainly cannot substitute for, though, is hard work and curiosity, which McQueen still possesses in spades. Happy birthday, Dr. McQueen!