(Re)locating religion in a technological age 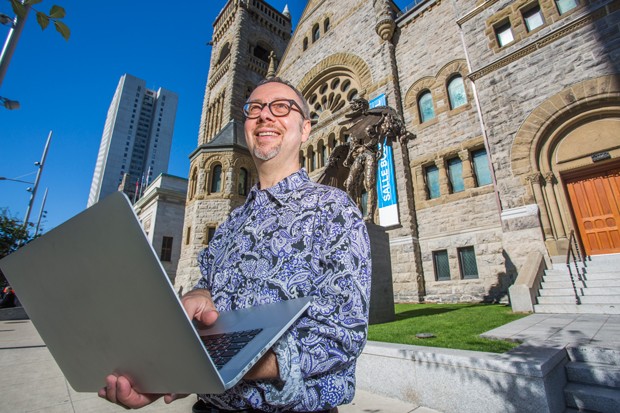 The Twitter handle @DalaiLama has more than seven million followers. A smartphone app provides Muslim worshippers with a customizable prayer alarm and a compass that points to Mecca. The first Papal “selfie” went viral in minutes.

The dawn of the digital age has brought religion and technology together like never before, but the pairing is nothing new: from stone tablets to the printing press, technology has long had a profound effect on religious practice. Together, Concordia Communication Studies Associate Professor Jeremy Stolow says they shed new light on what it means to be human.

As editor of the collected essays in Deus in Machina: Religion, Technology, and the Things in Between (Fordham University Press, 2013), Stolow takes an interdisciplinary voyage through the many different contexts in which religion and technology meet. By putting god back into the machine, he and the featured authors revise the idea that the two exist as separate areas of action and experience.

Stolow hopes that Deus in Machina will help shake readers free from the idea that there is a clear divide. “Religion has long been imagined as a domain of faith, belief, symbolism and ritual meaning, somehow detached from the ‘real’ world of technological actions,” he says. “But throughout history, religious actors have always depended on technologies of all sorts, and it is in fact impossible to generate religious knowledge or experience without them.”

It isn’t just religion that is affected by technology — the influence goes both ways. As technology’s reach and potency grow, it is increasingly coloured by religious implications.

“Just look at the dazzling retina displays that seem sharper than reality, the surveillance systems that track our every move, the large-scale industrial projects that threaten our planet. As technologies become more powerful and complex, they increasingly invoke long-standing religious themes of miracle, salvation and fate,” says Stolow.

Deus in Machina brings respected scholars from around the world together to evaluate the philosophical, cosmological and ethical terms on which technology has been imagined as the opposite of religion.

Their essays — on subjects ranging from the development of mechanical clocks in medieval Christian Europe and the healing power of prayer in premodern Buddhist Japan to Islamic debates about organ transplantation in contemporary Egypt — call attention to what can be created once this division has been done away with.

Take part in a discussion about what comes to light when religion and technology mingle freely at “Deus in Machina … Live!,” a special round table talk at Concordia on Friday, September 27.