Maziar Bahari, whose harrowing story is being made into a movie by Jon Stewart, to deliver Homecoming 2013 lecture at Concordia
|
By Tom Peacock 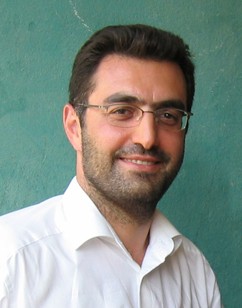 Maziar Bahari will be played by Gael Garcìa Bernal in the movie version of his story of imprisonment in Iran. “It’s a surreal experience for anyone to see themselves being portrayed by someone else, and I’m no exception.”

When seasoned journalist Maziar Bahari, BA (communication studies) 93, returned to his native Iran to report on the tumultuous presidential elections in 2009, he knew the danger was real, but he also believed it was an event he had to cover.

“I felt I was in a unique position to be able to tell a very important story at a very important time in Iran,” Bahari says by phone from his office in London, England. “What I didn’t know exactly is that I — as someone who was reporting on it — would become part of the story as well.”

When Bahari landed in Tehran, he found a city electrified by the possibility of change. Supporters of Mir-Hossein Mousavi, the only candidate left in the race to unseat incumbent president Mahmoud Ahmadinejad, filled the streets brazenly shouting their support.

Bahari was swept up by the excitement. He and others even began to believe there was a chance Mousavi could beat Ahmadinejad, the preferred candidate of Iran’s supreme leader, Ayatollah Khamenei.

But the journalist’s hopes — and the hopes of the Iranian majority — were dashed when it was announced that Ahmadinejad had won the election by a landslide. Over the ensuing days, thousands of Iranians took to the streets to protest the contested elections. The civil uprising would soon be called the Green Revolution.

Unfortunately, they ran head-on into the might of the Iranian military’s Revolutionary Guards. Many protesters were killed, injured or imprisoned.

The government crackdown was devastating for Bahari. However, he chose to stay on, determined to report on the growing defiance of the regime. He filmed the protests and wrote about them for Newsweek magazine.

Even after being warned that his reports were going to get him in trouble, Bahari continued to work — emboldened, he says, by the years he had spent working as a journalist in Iran, by the press authorization he had received from the regime, and by the fact he had always done his best to remain objective.

Then, on Sunday, June 21, 2009, the authorities came to his mother’s house to arrest him. Bahari spent the next 118 days in Iran’s notorious Evin Prison, where he was beaten, tortured and threatened repeatedly with execution.

His pregnant fiancée Paola, his journalist colleagues and many diplomats — including then United States Secretary of State Hillary Clinton — campaigned for his release. Eventually Bahari was freed — in time to see the birth of his first child.

Bahari recounted the traumatic ordeal in his 2011 book, Then They Came for Me: A Family's Story of Love, Captivity, and Survival, a New York Times best seller. The book is being turned into a film directed by The Daily Show’s Jon Stewart. The movie will be called Rosewater, named after the preferred scent worn by Bahari’s burly interrogator, and is scheduled to be released in 2014.

Before his captivity, Bahari appeared in a comedy sketch on Stewart’s The Daily Show, in which he commented on similarities between the U.S. and Iran. Incredibly, his real-life interrogator questioned him about the satirical role, claiming that it showed him speaking to an American spy.

Since his release, Bahari has campaigned in support of the thousands of innocent people imprisoned in Iran for their political beliefs or simply being in the wrong place at the wrong time.

“What happened to me really symbolized what has happened to many people in Iran,” he says. “And as a result I thought that I could use that opportunity to bring people’s attention to the plight of others.”

Bahari feels strongly that the relentless campaigning since the 2009 election by journalists like himself and human rights and political activists are behind recent positive changes in Iran, including the August election of the supreme leader’s “least favourite candidate” Hassan Rouhani.

A graduate of Concordia’s Department of Communication Studies, Bahari will return to his alma mater on October 4 for a discussion about his experience moderated by Paul Karwatsky, BA 04, co-anchor for CTV Montreal’s News at Noon and News at 6. The Resolute Forest Products Lecture is one of the marquee events during Concordia’s annual Homecoming celebration.

“It’s very special, of course,” Bahari says of the invitation to speak at the university. “Without Concordia, I wouldn’t have been able to do many of the things that I’ve done in my life. I met many good people — friends and teachers at Concordia — and it was really a privilege to be part of the Communication Studies program.”