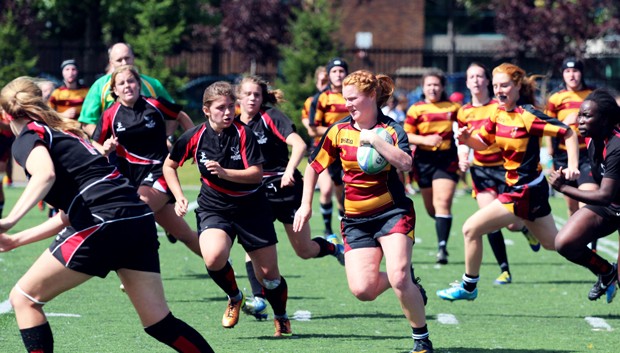 The season just started, but everything is already on the line for Concordia’s varsity and club sports athletes. Every minute of play represents a chance for new recruits to prove their worth on the field, and for veterans to show that they’ve earned the right to still be there.

We checked in to see how the Stingers are shaping up for this exciting two-month journey.

After securing a rollicking 51-7 home victory against the Carleton Ravens last Saturday, the Concordia women’s rugby team is yet again in fine fighting form.

The win came in spite of the squad losing two of its best players to Rugby Canada: Bianca Farella and Frédérique Rajotte were recently invited to join Team Canada as full-time players at its seven-a-side training camp.

“When your country comes calling, it’s kind of hard to turn down that opportunity to go to the Olympics in 2016,” says Stingers coach Graeme McGravie.

Even though he’s smarting somewhat from the loss, McGravie says his team still has a lot of depth. “We’ve been recruiting and we’ve got some great people coming in, so I’m super stoked,” he says.

One player McGravie’s happy to have back is flanker Hughanna Gaw, who sat out last season with a knee injury. “She’s a massive addition for us,” McGravie says, pointing to the vital leadership role she plays on the field. “She’s a tackling machine out there.”

Gaw says she couldn’t be happier to be back in her Stingers jersey. “Playing varsity sports is not really comparable to playing on other teams,” she says. “It’s just a different vibe. It’s more exciting — all the team spirit and the school pride. I missed it last year, that’s for sure.”

The next Stingers game is at Laval on Saturday; the following Wednesday (September 18), the team plays the McGill University Martlets in the annual Kelly-Anne Drummond Cup.

The men’s rugby team suffered a nail-biter of a loss to the McGill Redmen in the Roseau du sport étudiant du Québec (RSEQ) Championship last year. The team had a stellar season, with only two losses: five Stingers were named to the league’s all-star team.

This fall, the team will again benefit from the prowess of second-year winger Caleb Jordan and third-year winger Frederic Kacou, who both attended Team Canada’s seven-a-side training camp tryouts for men earlier in the month. Jordan also played for Canada at the 2013 Universiade Summer Games in Russia.

“As a veteran, you’re always curious when you come back and you’ve got a young team,” says fourth-year Stingers receiver Kris Bastien.

“We’ve got a lot of young guys starting on defence. It’s obviously going to take time to adjust, but they’re a really good gang of kids, and we’ve got a lot of talent. I honestly feel like we’ve got a team that could play with any team in this conference.”

Last Friday at Percival Molson Stadium, the Stingers took on the McGill Redmen in the annual Shaughnessy Cup. Bastien caught six passes for 90 yards and two touchdowns, but his and the team’s efforts were not enough to best their cross-town rivals: the Redmen came out on top 32-19.

During his long career as a goalkeeper, Greg Sutton — now head coach of Concordia’s men’s soccer team — played both at the collegiate and professional level. He says the major difference is that university teams only have two months to get the results they need to win a championship, whereas professional teams normally have 10 months.

“The games are extremely important, because there are so few of them,” he says. “You’ve got to come out and compete every week.”

Keeping the team focused and in shape is priority number one, he adds. The Stingers suffered a disappointing 5-1 loss in the season opener against Université de Montréal, but is set to bounce back in their first home game on Friday, September 13.

“I think everybody is ready for the challenge, even though it’s not going to be easy,” Sutton says. “We’re prepared for the season, but we know we’ve still got to continue to grow into a better team.”

The women’s soccer team already have two regular-season games under their belts. They lost narrowly to Bishop’s University and Université de Montréal; they aim to turn things around on Friday night, in a home game against UQAM.

Concordia’s baseball team has won three of its four league games so far in the Northern Conference of the Canadian Intercollegiate Baseball Assocation. They’re on track to make an appearance at the National Championships, after missing the big show last year.

The cross-country running team, under the direction of new coach Simon Driver, will compete in the McGill Open on Saturday, September 15.

The golf team will contend in the Concordia Open at the Club de golf Le Blainvillier in Blainville on Sunday, September 22, and Monday, September 23. The Stingers are currently sixth in the RSEQ university league standings.