Where to park your bike — and more 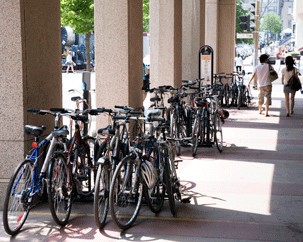 A new procedure is being implemented to reduce the number of abandoned bicycles on campus. Photo by Concordia University

Concordia cyclists will be happy to hear that more than 200 bicycle-rack parking spaces have been added for the fall term, with more to come.

Here’s a look at the distribution of the 33 new bike racks on the Sir George Williams Campus:

A further 120 spaces will soon be added to the south side of the J.W. McConnell Building.

Bike rack placement on the Loyola Campus is also being evaluated to allow for more efficient access.

A new procedure is being implemented to reduce the number of abandoned bicycles on campus. The “Abandoned, Lost, and Forgotten Movable Bicycle Procedure” aims to ensure that bike-rack spaces are available to active cyclists.

Throughout the year, the university deals with lost, forgotten, abandoned, vandalized and stolen bicycles: campus bicycle facilities are limited and designed for temporary parking, rather than long-term storage. Abandoned bicycles reduce the number of parking spaces available to active cyclists and can cause safety, accessibility and aesthetic issues; this procedure outlines the process for reporting, tagging and removing them.

Any bicycle considered to be abandoned will be impounded in order to maintain adequate, safe and accessible parking for others; they will then remain in storage for a period of 90 days, during which time they may be claimed by their owner. Unclaimed bicycles will be donated or recycled.