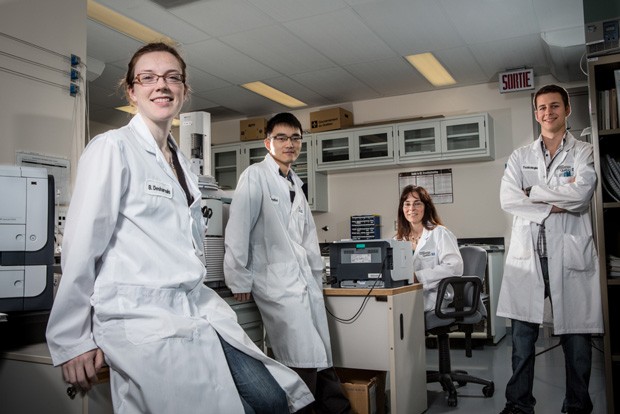 In the past few years they found a better way to identify GHB, the “date rape” drug; spot minute amounts of cyanide; and detect signature compounds that indicate a natural death from undiagnosed diabetes.

“The analyses we make and the conclusions we draw are what a judge and jury will eventually consider,” says Maxime Gosselin. “We provide clues that are often indispensable to exposing the truth.” Gosselin adds that at the lab, he “used world-class equipment to test for controlled substances like cocaine, amphetamines, street drugs and some of the most powerful poisons known to man.”

Greg Kozadjian’s Co-op term involved developing a method called the 3G, which screens for about 320 prescribed and illicit drugs using liquid chromatography-mass spectrometry (LC-MS) testing. “With LC-MS, there is no need for modification steps, therefore guaranteeing lower analysis costs and improving confidence in results,” he says. “Inaccurate drug testing results can suggest innocence when the answer should be guilt.”

But these important advances are only part of what this partnership has accomplished. Vincent Grenier’s GBH research was published in the Journal of Analytical Toxicology; he’ll be pursuing his PhD in chemistry at the University of California, Berkeley, this fall, and hopes to work as a researcher in the biotech-pharma sector afterwards.

Brigitte Desharnais’ method for detecting small amounts of cyanide in different biological samples, including blood and gastric contents, led to publication in Forensic Science International. Desharnais, a PhD student and the recipient of a $50,000-a-year Natural Sciences and Engineering Research Council of Canada Vanier Scholarship, is now leading her own project at the forensics lab. 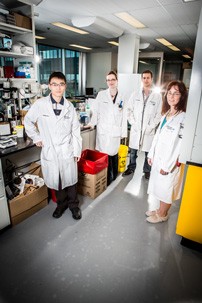 More than anything, a Co-op work term is an opportunity for students to learn from professionals. Kevin Louie worked closely with a supervisor to develop a gas chromatography-mass spectrometry method to determine if an individual’s death could be the result of undiagnosed diabetes. This can play a role in ruling out other suspected unnatural causes of death, such as poison.

“It is extraordinary when you realize that you work for such an amazing organization, and that your work will help in some measure to continue its excellent tradition of supporting justice,” says Louie.

Gosselin agrees. “At the crime lab, I was introduced to professions I hadn’t considered pursuing. I saw pathologists and forensic toxicologists at work, and developed a keen interest in both careers. There’s no saying where I’ll go in the years to come, but it’s great to know that there are so many possibilities out there.”

The appreciation goes both ways. As supervisor Martine Lamarche, a chemist and forensic toxicologist, says, “The students from Concordia are a bonus to our current technical and scientific team. We are very thankful for their help.”

·       Concordia's Department of Chemistry and Biochemistry