“It blew my mind” 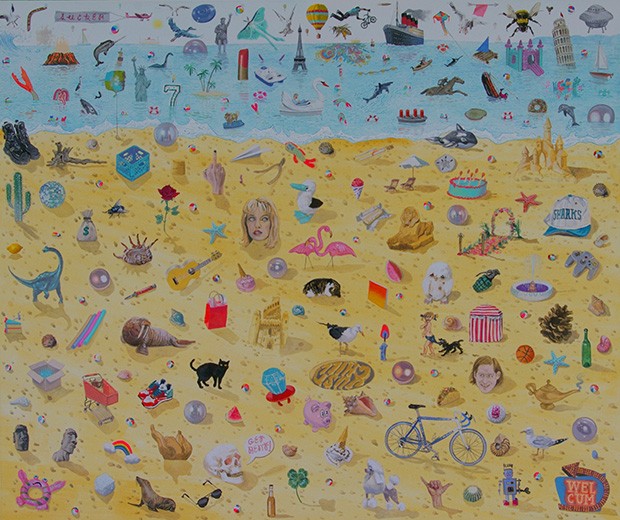 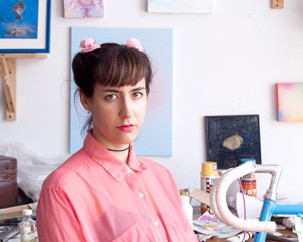 The artist in her studio. | Photo by Hugo Dufour

Laura Rokas-Bérubé was sitting on her sister’s kitchen floor, feeling a bit dejected, when she received a call from a number she didn’t recognize.

It was a representative from the BMO Financial Group phoning to tell her she was the regional winner of the 1st Art! Invitational Student Art Competition for Quebec. The prize comes with a cheque for $5,000.

“I was just, like — tears. I could not believe it,” says the recent graduate from Concordia’s Department of Studio Arts. “It had been a rough year, I guess … ”

At the time, Rokas-Bérubé was struggling financially, despite holding down one part-time job as a bike messenger and another at a coffee shop. She was also crashing at her sister’s: she’d recently had to abandon her St. Henri apartment after it was infested with bed bugs.

But the rough patch actually started in earnest much earlier.

On Friday, April 13, 2012, Rokas-Bérubé fell down an elevator shaft in an abandoned building and broke her back. The accident left her bedridden for a month and a half. “I couldn’t really do anything,” she remembers. “It was right when school was out and everyone was partying and celebrating and I was stuck in my room watching movies on my computer.”

Eventually, tired of viewing endless TV, Rokas-Bérubé began to create an ambitious, ironic work of art. “I guess it was partially inspired by a poster in my bathroom that my old roommate left there when he moved out. It was Garfield on the beach, and it said, ‘Life’s a beach.’ ”

The 40 x 50 cm gouache painting is a neatly arranged collage of objects, animals, figures and faces strewn across a seascape — pink flamingos, a grenade, a walrus, a baseball hat, a milk crate, the Twin Peaks character Laura Palmer (during her viewing marathon, Rokas-Bérubé watched the entire television series).

“There was all this debris from my life: things I was thinking about at the time when I couldn’t really do anything,” she says. “There’s a lot of referencing past paintings of mine from that year, and little snippets of pop culture.”

When she finished “Life’s a Beach” Rokas-Bérubé was very satisfied with it. “For some reason I just felt like I really came full circle, and I was like, ‘Oh yeah, this works. This is done.’ ”

Yet when she submitted the painting to the BMO Financial Group’s 1st Art! Invitational Student Art Competition, Rokas-Bérubé didn’t expect to win.

“It blew my mind,” she says. “It could not have come at a better time.”

Eric Simon, associate professor and chair of the Department of Studio Arts, invited Rokas-Bérubé to represent Concordia in the contest because he finds her work stands out.

“She’s close to professional, if not already professional, in terms of quality,” he says, adding that it’s difficult to pin down specific influences in her work. “She’s exploring a lot, and she does everything well. She’s not afraid to try things out.”

It’s been more than a year since the accident, and Rokas-Bérubé says her back is pain-free now. Lately, she’s been trying to paint as much as possible — but it’s summertime and there’s a lot going on. She recently started a side project, custom-painting bicycle frames.

She’s also wrestling with the idea of becoming a professional artist.

“You’re striving to do something that’s difficult in and of itself, to make good art. And even if you do make good art, how do you make a living at that? I kind of get a break from it because I have two other jobs, but it’s always at the back of my mind.”

She says it helps to remember some advice a professor once gave her: you’ll never make it as an artist if you don’t make it the number-one priority in your life.

“So whenever I’m stressing about something, I’ll just think about art. It’s the most important thing anyway, right?”