Husband and wife team have had very full legal careers since they first met at Loyola College in 1964.
|
By Patrick McDonagh

One morning about 20 years ago, Pierrette Sévigny, BA 67, was meeting clients in the offices of McConomy Sévigny, the firm she had shared for a decade with husband Richard McConomy, BA 66. A call arrived. "I was busy," Sévigny recounts. "So I said, 'She's not here -- call back at two. Who shall I say is calling?' Well, it was the minister of justice's office, because my name had been put forward to be a judge."

McConomy picks up the narrative: "I told her, 'Don't ask questions! Just say yes!' " When the afternoon call arrived, Sévigny was still preparing clients. McConomy continues: "Our new receptionist rushes in saying, 'The premier of Quebec wants to speak to you.' So Pierrette looks at her and says, 'What the hell does he want? I'm expecting an important phone call!' The receptionist rushes out again, but returns saying it wasn't the premier after all. It was the prime minister of Canada, Brian Mulroney." 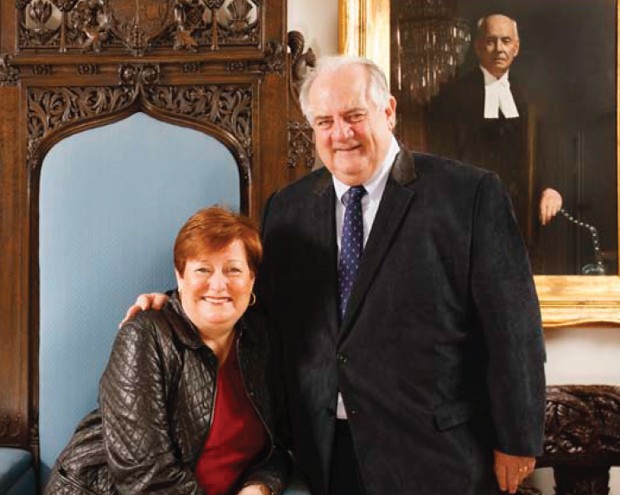 Richard McConomy and Pierrette Sévigny in their Montreal home. Sévigny, a former Quebec superior court judge, is seated on the chair of her grandfather, Albert Sévigny (in the portrait), from when he was speaker of the Canadian House of Commons.

Sévigny took the call, accepted the position and became the Honorable Pierrette Sévigny, judge of the Quebec Superior Court, a position she held from 1992 until her retirement in 2009. "I loved being a judge," she says. "Every case was different, and you never knew what was going to happen next." There was also the creative challenge of rendering judgments. "You have to be very careful how you describe witnesses. For instance, you cannot say someone lied. You have to find a way to say his version of the facts was somewhat different from others."

Becoming a judge was one highlight in a pair of very full legal careers, which began their intersecting paths at Loyola College, one of Concordia's founding institutions. McConomy was studying political science there in 1964 when he met Sévigny, who was among the initial cohort of 100 women to be admitted to Loyola. She was the girlfriend of McConomy's Radio Loyola co-president, Peter Murphy. "One day I asked Peter, 'Are you taking your girlfriend to lunch?' " and he said no -- so I did."

That first tête-à-tête wasn't promising. "We were black-versus-white, liberal-versus-conservative on so many issues. We decided we could probably not even be friends -- maybe just acquaintances waving politely at one another across the room," he admits. However, as in many a romantic com-edy, the early conflict was misleading. The next day the two met again. "We sat in the old caf and drew up a 10-year plan to get law degrees after our BAs." McConomy was 20, Sévigny 17.

Four years after that fateful lunch, they married. McConomy was in law school at McGill University and Sévigny had earned a teaching certificate. ("We had to eat, and he was still a student," she says.) To supplement her meagre teaching salary, during the summer McConomy worked as an advance agent for the Shrine Circus's tour of northern Quebec and Ontario while Sévigny performed research for a McGill law professor and worked for the opera. When McConomy graduated in 1970, Sévigny launched into her law studies at McGill; she graduated in 1973. "So it's 10 years after we made our plan, and we're thinking, 'We did it! But what are we going to do now?' " Sévigny recalls.

What indeed? McConomy, who had begun as a securities lawyer, had moved into litigation, and Sévigny worked for the Canadian National Railway, primarily in civil litigation. In 1980 she joined her husband's fledgling Montreal law firm, McConomy Burke & Boissé. That same year, McConomy launched one of Quebec's first class-action suits, representing 50 citizens suing the municipality of Saint-Gabriel-de-Brandon for having suffered typhoid fever due to a poisoned water supply. Despite impressive expert witnesses on the opposing side, McConomy won the case, garnering a lofty $250,000 judgement for the plaintiffs. In the following years the firm became McConomy Sévigny, the two working as a team until Sévigny answered Mulroney's phone call.

In 2008, McConomy founded the Richard McConomy Conflicts Resolution Centre (rmcconomy-mediator.com), which focuses on solving disputes through mediation. After retiring from the bench three years ago, Sévigny joined the team -- a new version of McConomy Sévigny. They also share a commitment to their health, training with a professional four or five early mornings each week.

McConomy recalls meeting a group of lawyers back in 1986, when little was known about legal mediation. "Everyone was in a kerfuffle over mediation, which was very new at the time," he says. McConomy decided to investigate further, taking courses in mediation and soon instructing others. Since 1988 he has helped train more than 1,000 mediators in Canada, the United States, Belgium and France and currently runs courses in family as well as civil and commercial mediation.

"You have to understand, we like what we do. We have fun," says Sévigny, whose enthusiasm for the law illuminates her conversation. Indeed, she comes from a family steeped in politics and the law: her father, Pierre Sévigny, served in Canadian Prime Minister John Diefenbaker's 1950s and '60s government and also taught at Concordia in what would become the John Molson School of Business; her grandfather, Albert Sévigny, served in Prime Minister Robert Borden's government a century ago.

Both are effusive in their praise of their alma mater. "All of this started at Loyola," says Sévigny. She points to the significance of being a trailblazer as part of the college's first female cohort and adds that many of her college peers remain among her closest friends.

McConomy further states: "What we learned there was that when the door is open, you should walk in." After 40-plus years in law and marriage, there's ample evidence that McConomy and Sévigny have walked through many doorways and left their impressive marks on Canadian law.

Captions: Richard McConomy and Pierrette Sévigny in their Montreal home. Sévigny, a former Quebec superior court judge, is seated on the chair of her grandfather, Albert Sévigny (in the portrait), from when he was speaker of the Canadian house of commons. Credit: Pierre Charbonneau Sévigny and McConomy at her deubutant ball in 1964. As a liberal party student representative in the mid 1960s, McConomy recalls: "I found myself sitting between René Lévesque and Jean Lesage, who kidded me by saying, 'you think you know all the answers -- but we don't even know the questions yet!' "