What is “Iranian Religion”?

Montreal, February 12, 2014 – Officially, the Islamic Republic of Iran has a 99% Muslim majority. However, Christian, Jewish and Zoroastrian minorities are officially recognized, and have played important roles in Iran’s history as well as that of the world’s religions. This diversity is the theme of a new book by Concordia University scholar Richard Foltz, Religions of Iran: From Prehistory to Present. 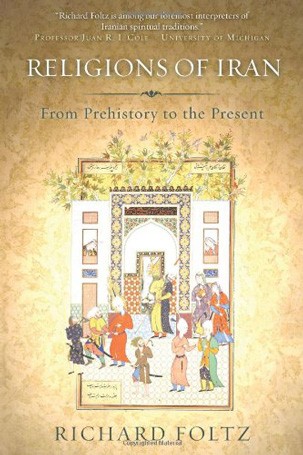 Religions of Iran is published by Oneworld publications

“Despite the fact that Iranian cultural identity has been strong for over 25 centuries, it defies any kind of simplistic definition,” says Foltz, who is the director of Concordia University’s Centre for Iranian Studies and a leading expert on the subject of Iran’s place in the history of religions. “Most of the cultures of Asia identify with Iran on some level, much as Westerners do with Greece and Rome.”

Situated at the crossroads of East and West, Iran has been at the centre of world history for the past three millennia. Religions of Iran brings to light the connections between Iranian civilization and those of Europe, the Middle East, and Asia. To many, these connections can come as a surprise.

Originating as one of the Indo-European tribes in prehistoric times, Iranians share much of their mythology with the Greeks, Romans, Norse, and Hindus. From this common past emerged the uniquely Iranian religion of Zoroastrianism, many of whose central beliefs were later adopted by Judaism, Buddhism, Christianity, and Islam.

“That sense of cosmopolitanism continues for today’s Iranians,” says Foltz, “especially for those in the educated urban classes, who demonstrate a powerful tendency toward spiritual eclecticism.” He explains that significant numbers of Iranian Muslims supplement their spiritual lives with a wide range of beliefs and practices, many of them drawn from a variety of contemporary "new age" sources.

“At the same time,” Foltz points out, “officially speaking, religion continues to be a loaded subject in Iran. The political climate is filled with contradictions and paradoxes, so that from one day to the next it can be hard to know which discussions are acceptable and which aren’t.”

Foltz, who visited Iran as recently as last month, doubts this will change any time soon. “But even so,” he notes, “given that spirituality is clearly so deeply entrenched in the Iranian psyche, it is only natural that many Iranians will continue to pursue their curiosity about the world's various faiths in a spirit of objectivity and respect. “

Foltz’s research is generating interest and sparking conversation among scholars as well as the public. Join the conversation: Religions of Iran is currently being featured by the University of Chicago Divinity School in an online forum for thought-provoking discussion on the relationship of scholarship in religion to culture and public life. This month, a number of top scholars in the field have been invited to comment on Foltz’s research in a way that "opens out" to themes, problems, and events in world cultures and contemporary life.  For more information, visit: http://divinity.uchicago.edu/religion-and-culture-web-forum-0