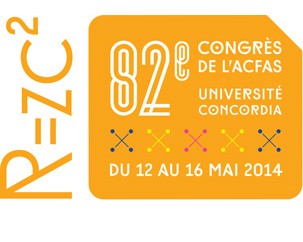 On Sunday, May 18 Graham Carr, vice-president of Research and Graduate Studies, and Mourad Debbabi, professor in Concordia’s Institute for Information Systems Engineering, was on Les années lumière (noon to 2 p.m.) which was taped live at Concordia during Acfas.

Patrik Marier, professor in the Department of Political Science, appeared on CTV News at Noon to discuss his Acfas presentation on aging and public policy.

The Montreal Gazette publishes an article about Acfas being hosted by Concordia and quotes Concordia President Alan Shepard and Graham Carr, vice-president of Research and Graduate Studies. The article also highlights some of the research that will be presented by Concordia including; Mourad Debbabi, professor in Concordia’s Institute for Information Systems Engineering, who will be presenting on cybercrime; Louis Bherer, scientific director at the PERFORM Centre, who will be presenting on aging well; and Krista Riley, PhD candidate in the Department of Communication Studies, on Muslim feminists and social media.

Political science researcher Elhadji Mbaye, who is a post-doctoral fellow under the Concordia University Research Chair in HIV/AIDS and Sexual Health, appeared on RCI to discuss the stigma associated with the LGBTQ community and HIV/AIDS in Africa.

Yves Gélinas, professor in the Department of Chemistry and Biochemistry, appeared on RCI to discuss the impact of fracking on the environment.

The National Post features an article about a new global poll revealing that Canadians are more likely to be anti-semitic than Americans. The article quotes Ira Robinson, director of the Institute for Canadian Jewish Studies. The story is also carried by Press Display. Robinson presented on Quebec’s anti-semitic history on Monday at Acfas.

Radio-Canada International interviewed Naïma Hamrouni, post-doctoral researcher at the Simone de Beauvoir Institute, about the colloquium on racialized women and their contribution to feminist research in Québec.

On Saturday, May 10 Le Devoir published a cahier spéciale about the Associations francophone pour le savoir (Acfas). The cahier features an interview with President Alan Shepard, a second article with Graham Carr and another about Concordia as the Acfas host. The cahier also features an article about research conducted by Louis Bherer, scientific director of the PERFORM Centre, and a separate article about the Quebec English-Speaking Communities Research Network (QUESCREN) symposium, which will feature Lorraine O’Donnell, coordinator researcher in QUESCREN and School of Extended Learning.