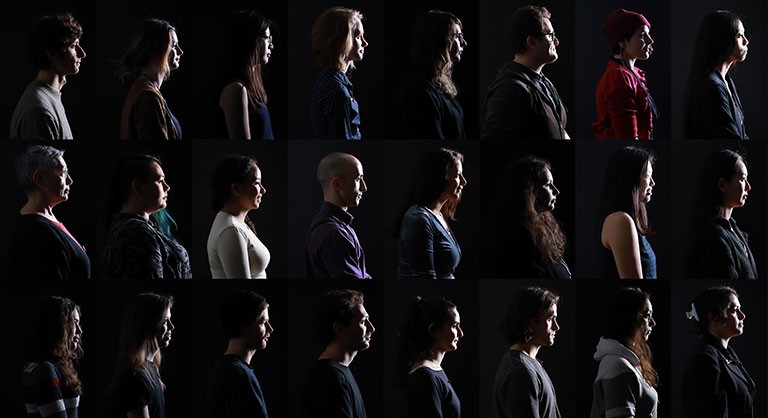 “The Convergence course is a testament to what can be achieved when artists and scientists come together,” says PhD student Bettina Forget.

“We wanted to establish a link between neuroscience and the art community,” said Zaelzer, who holds a PhD in molecular and cell biology, and is the president and founder of the Convergence Initiative.

Zaelzer and Art Education PhD student Bettina Forget recently finished teaching a six credit Convergence course that ran through the 2018/19 academic year. Their course brought students together from the Faculty of Fine Arts at Concordia and the Brain Repair and Integrative Neuroscience Program (BRaIN) at the McGill University Health Centre (MUHC).

Zaelzer met Bettina Forget through a chance encounter at a conference. Forget is also the founder and owner of the Visual Voice gallery, a space with a mandate to show work that intersects art with science.

“When people think of art, they think of reclining nudes and landscapes,” said Forget.

“The idea to give students the opportunity to explore each others silos, and to pull these two worlds together and create something in common.”

During the course, students were asked to imagine each others disciplines, and to examine their internalized perspectives of both scientists and artists. Through engaged projects, readings, and site visits, they formed a shared knowledge and vocabulary.

The outcome of the course can be seen in two exhibitions of these collaborations. The first ran from April 12 – 27 in the Visual Voice Gallery. Their works filled the gallery with screens, lightboxes, sculptures, prints, plants, and even a game.

“By displaying the responses visually, my partner saw certain nuances coming from the patient that she had never considered before,” said Panginaban.

The difference between this year’s class and the first Convergence class in 2016/2017 was that this year, McGill students could enrol in the course for credit. In previous years, they were the artist’s subjects.

Be sure to check out the second half of the work at Concordia’s black box from April 18 - 27, with a vernissage on April 25.