The Future 500 Interview is a monthly Q&A with affiliates of the Institute for Urban Futures. 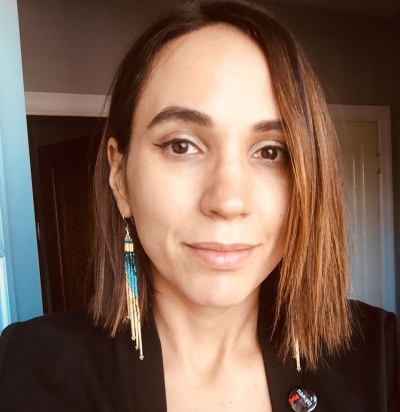 Jessica Quijano has been an activist in the feminist community for twenty years and a dedicated street outreach worker for the past seventeen years. Since its inception in 2017, she has been the coordinator of Iskweu (Ishkway), a project affiliated with the Native Women’s Shelter of Montreal. Iskweu Project’s mandate is unequivocal: to reduce the number of missing and murdered Indigenous women, girls, trans and two-spirit people, and to ensure that the police are filing reports and appropriate follow-through on cases of those who have gone missing. With funding for HIV prevention outreach cut to the Native Women’s Shelter of Montreal, broad political initiatives around truth and reconciliation remain at variance with what many people are experiencing on the ground in the present moment. The Institute for Urban Futures sat down with Quijano to talk more nuanced views on street-based kinships and economies in Indigenous populations.

Institute for Urban Futures: What does your work at Iskweu entail?

JQ: When there’s a disappearance or a death I follow up with the family or close ones and work to ensure that the police will investigate properly. Indigenous communities noticed that when a woman went missing the police wouldn’t take a report. The police would say all the stereotypical things: she’s out on a bender and so on. Quebec native women did a study that showed there were more people missing than police reports indicated. People didn’t file reports because of the atrocious history with police. The communities decided that they needed someone to do the police report. The whole goal of Iskweu Project is that if there’s someone supporting the person they feel safer to do the report because there’s accountability.

How do you navigate colonial systems of supervision and discipline in your work with Indigenous women?

I need the police in order to do my job because they are really necessary when it comes to locating someone. I know people like to go and look for people on their own but when the police actually do their job, they can locate someone very quickly. They look at all the hospitals, they look at detention centers. When they get their people on the ground it’s amazing how quickly they can locate somebody. At the same time, we want the police to stop over-policing when it comes to people on the street, but to respond appropriately when there’s a disappearance. We want to reverse the order.  I call my relationship with the police a corroboration, not a collaboration.

And how has your corroboration been going?

Until recently, when someone went missing, the last person who saw that person had to do the police report. This can be complicated. For example, a woman who is on the streets says to me, “listen, I’m worried about my friend, I haven’t seen her in a few days” but she doesn’t want to go to the police because she has warrants or any number of things. Iskweu signed an agreement with the SPVM that states I can take that information and I can do the report and I don’t have to compromise this woman’s confidentiality. The SPVM agreed to this protocol. This anonymity makes it easier for people to make a police report.

What other services do you offer Indigenous women on the street?

I also accompany women when they are assaulted on the street to bring forward those cases and support throughout the process. So, I could be doing work with them through the justice system but also show them how they can find housing and welfare. Especially with Inuit women, a lot of them don’t get welfare. They are really completely disconnected from those systems. Education and outreach programs, why don’t you have any Inuit people doing frontline work? If you are running a homeless shelter and you are not seeing any Inuit people why? It is not because they don’t exist. It is because they do not see themselves in those spaces.

We also have Indigenous volunteers offering toolkits at points of entry into the city. These toolkits address issues such as sex work, so that people know their options and they can go to relevant outreach organizations or organizations like Stella l’amie de Maimie, which supports sex workers. I try to change the conversation around victimization, because people often just say, “a lot of violent men want to prey on young Inuit women.” Why is that happening? Because these men are giving them an option. Like a place to live. We need to do better. We need to let them know that there’s something else out there. If you don’t know about our services and someone comes up to you and says hey you want a place to stay, what are you going to do?

What are some of the most common stereotypes that hamper your work and the women you service?

One of the issues that needs to be addressed is the idea of the perfect victim and access to support networks. We do not work with perfect victims. They’re in the sex trade, they use drugs, they sell drugs, they’re in the prison system, they can be violent. This is just the reality. And unless we want to address the complexities of these issues, we won’t get anywhere.

This idea that women come here and are all of the sudden exposed to crack and alcohol is very untrue. The women I work with are leaving their community for a variety of reasons but sometimes it’s because using crack in their community is too expensive or that they’re doing sex work for free. This idea that they’re so innocent and they just come off the bus? If women come off the bus with nothing it’s because they were already in a difficult situation. We don’t ever really ask the women what they might need and what they have come from. We cannot limit women’s access to support because they are not perfect victims.

Moving forward, what will Iskweu need to continue providing its services to Indigenous women on the street?

Iskweu’s funding lasts until March 2019. We asked for renewed funding but we haven’t gotten a straight response. There’s a chance that it might be cut. Prevention programs like this, and Iskweu is the only program that follows up with the police, are important. I worry if we don’t get funding things will go back to the way they were before, with a lack of police accountability and an inability for people to report.

We need funding to pay my salary. We need funding to pay for travel. I also go into communities outside of Montreal when there’s a missing case. I go to Ottawa because we have a lot of people going back and forth. Currently our reporting protocol is with the SPVM but we’d also like it to be for the SQ.

When I have a family looking from another community, I fundraise on my own. This pays for peoples’ hotel rooms and whatever else they need to help them out during this crisis period. It’s all very nice to tell families, “don’t come down here you can’t do anything” but when your daughter’s missing you need to be doing something. Having those funds to help families directly is important.

We don’t need a massive consultation on how to do all this work. I can tell you right now how women will be safer. Why don’t we have a wet shelter? Why don’t we have a drop-in center? And women are going missing in the middle of night. There are no street outreach workers. The shelters have so many rules, you can’t be intoxicated and so on. We are telling women if you’re not sober, you have to live on the street and be unsafe. That’s a horrible message. Thank god for the fast food restaurants. I always say that. Honestly those McDonald’s employees, those teenagers? They’re doing so much, they don’t even realize it. They’re so chill.

Jessica, thank you for your work. I’ll finish by asking what we ask everyone: what does your urban future include?

The empowerment of Indigenous women. Getting them access to housing, healthcare and basic human rights. Better access for what is available to them in the system. The creation of projects like a wet shelter and a drop-in center for women to be safer. Going beyond harm reduction and having detox centers. Right now, detox centers don’t take you in if you have legal issues. It’s ridiculous, it’s discriminating against homeless people. To continue the work with the police, and build sensitivity training for the police through the Native Women’s Shelter. I always go back to the women I work with, and the question I ask: what do you need? There needs to be more of a movement for the Indigenous urban population that centers this population.