Right to the City students bring art to Milton Parc

Painting and Drawing students participate in semester-long project to explore the right to housing in Montreal
|
By Katharine Stein
Source: Faculty of Fine Arts 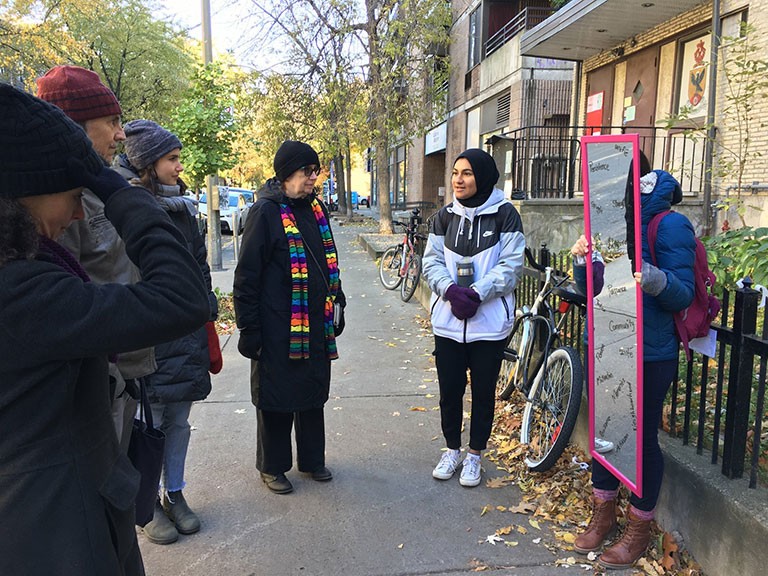 Students wrapped up their first term of a year-long drawing course taking place in Montreal’s historic Milton-Parc community as part of Concordia’s ongoing Right to the City teaching initiative.

Art History Professor Cynthia Hammond, who led the course, asked students to respond creatively to the built environment of Milton-Parc by “drawing a creative action out of this site.”

Hammond, who co-conceived of the course originally with Painting and Drawing Professor Francois Morelli, explains that the aim is “to address how artists do not just act upon space – space [also] acts upon us – and to explore that idea in different artistic formats.”

“In terms of the art, for a lot of students this is the first time they are doing an art project outside the classroom or their bedroom. There’s been a lot to encounter and engage with,” adds Hammond.

‘Why haven’t you ever worked with us?’

“The Communauté Milton-Parc approached me a little over a year ago and said, ‘we know about your work with the Right to the City. Why haven’t you ever worked with us?’”

Hammond’s class spent 12 weeks engaging with the neighbourhood, which is celebrating the 50th anniversary of the Milton-Parc Citizen’s Committee (CCMP), a grassroots organization established in 1968 to combat development plans that threatened the community and its architectural heritage.

The Milton-Parc course dovetailed nicely with the Right to the City project, says Hammond, who led the first three years of the Right to the City initiative with other Concordia professors in Fine Arts and Arts and Science. In that version, a series of graduate-level seminars brought students from multiple Faculties together to engage with the history and citizens of Pointe Saint Charles, a neighbourhood in southwest Montreal.

Milton-Parc residents recognized that one of the outcomes of the Right to the City approach was the way it made the self-determination of Pointe-Saint-Charles more visible. In the 1970s and 80s, the CCMP successfully lobbied to have the land rights for several city blocks transferred to a cooperative of citizens, who subdivided it into housing cooperatives.

Despite such a historic win, visibility continues to be an issue for the community.

“It’s the biggest housing cooperative in North America, and the first of its kind on a land trust, but no one in Montreal knows about it. People tend to think of this neighbourhood as the McGill Ghetto,” says Hammond.

The course has also shown students that the issues surrounding housing are intergenerational.

“A lot of the students have very deep concerns, as many young people in the arts do, about survival. How do you survive, especially in a gentrifying city? The course has really taught a lot of us, including me, about the possibilities of organizing legally and financially around your own housing security.”

A variety of artworks came out of the class, ranging from collaborative zines to reuseable protest stamps and photo-transferred scarves. Many students also chose to focus on artworks that were interactive or could be taken home.

Students held a public art event across the neighbourhood on October 26th,  and had their end of term vernissage at the Association Récréative Milton Parc from 22-28 November. 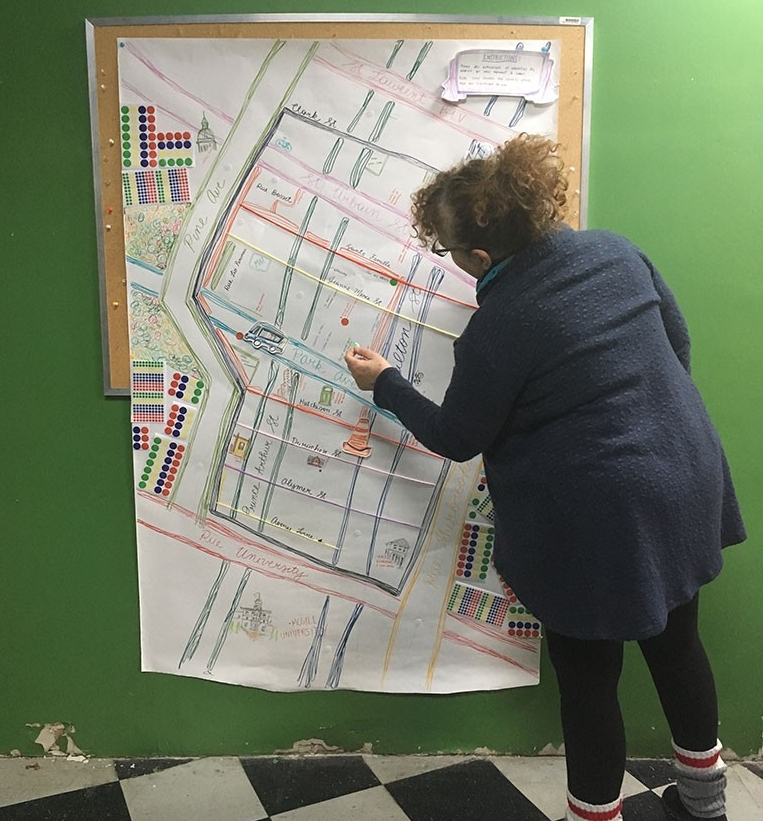 Third-year Painting and Drawing student Leslie-Ann Tuazon recorded her experience learning about Milton-Parc by creating a map. She added stickers to mark places that resonated with her and invited participants to add stickers of their own.

“People were very open and vulnerable with me,” says Tuazon. “There were many emotional responses.” 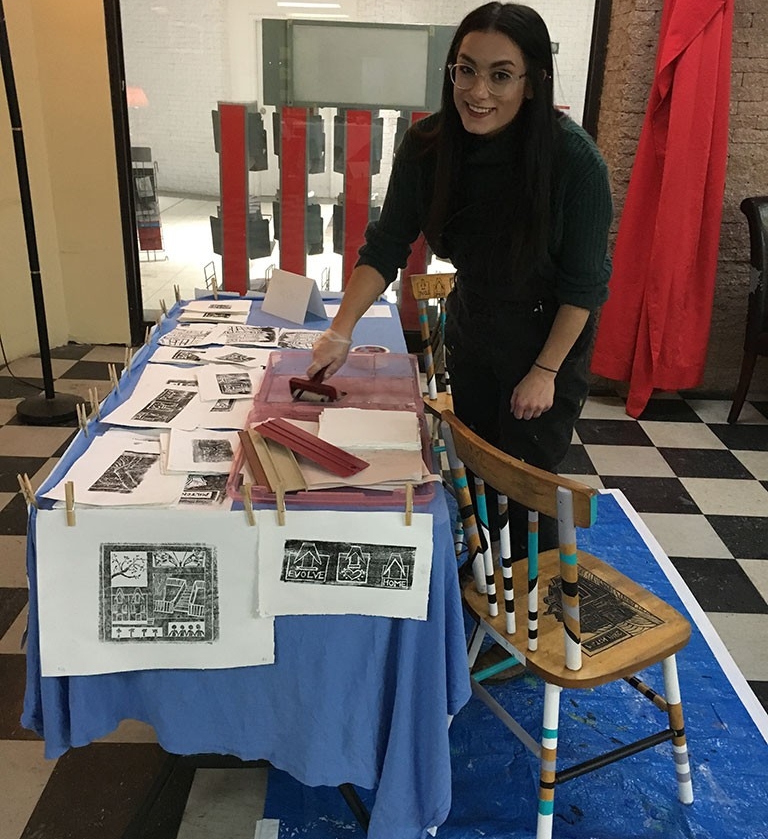 Brenna Tomas, an Art History and Studio Arts major, commemorated the struggle of the CCMP with an installation. Two empty chairs sat facing one another, recalling the difficulty of feeling optimistic in the midst of what felt like an impossible struggle against powers-that-be. She carved images into the chairs, and then showed visitors how to ink and pull their own prints from the chairs, in the same manner as woodblock prints. Visitors could take their print home. 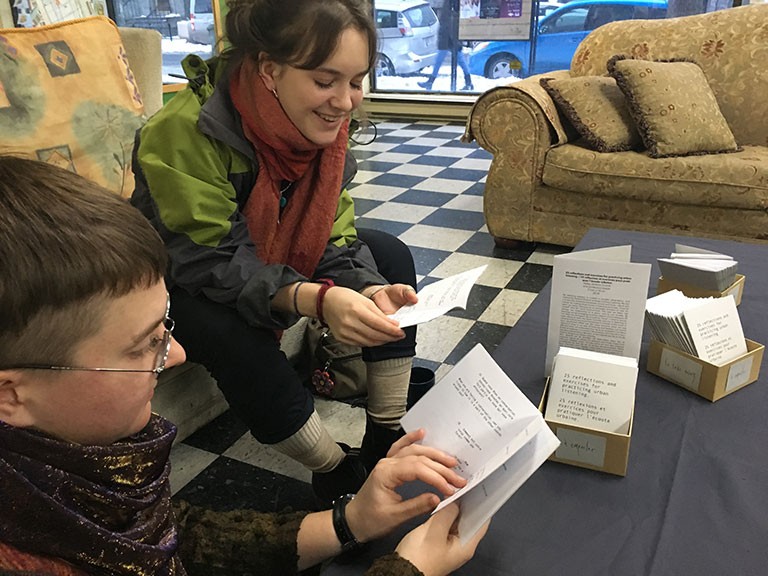 Several students also decided to create something that could be taken away by viewers, such as gifts or skill-shares. Painting and Drawing major Haley Jenkins-Crumb led a listening meditation and had copies of their zine on urban listening available to take home. 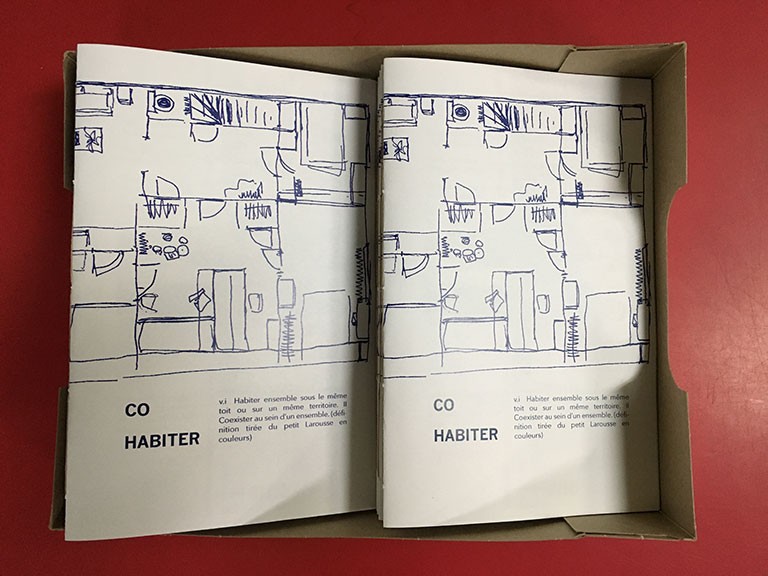 Studio Arts majors Émilie Busse and Émilie Hould also created a zine for viewers to take home, which records their interactions with passersby during an earlier site-specific project in which they had drawn a floorplan of their shared apartment on a street in another neighborhood now facing urban change, Hochelaga-Maisonneuve. 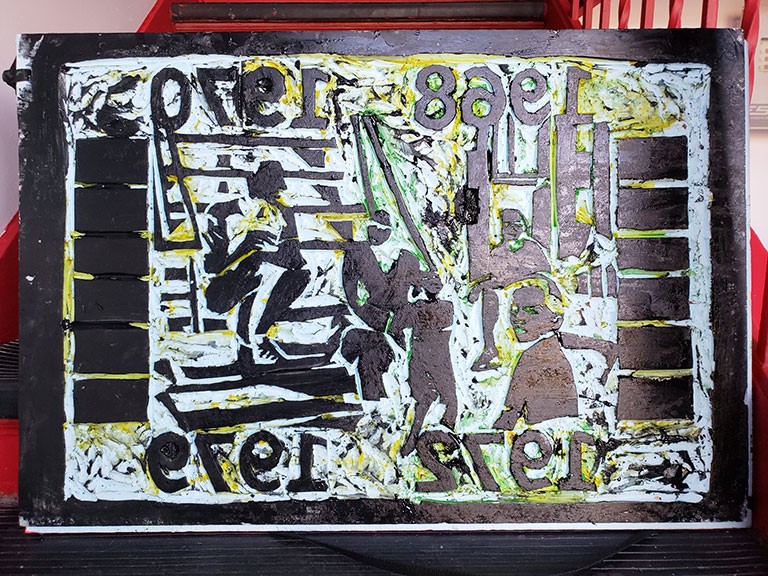 Studio Arts major Avery Zhao-Djokic made something that could be used repeatedly in the community’s ongoing protests: a series of reuseable protest stamps. “To make protests banners usually is very time consuming or very expensive to print, but if you make reusable stamps, it’s useful. Often the cause is the same for decades.”