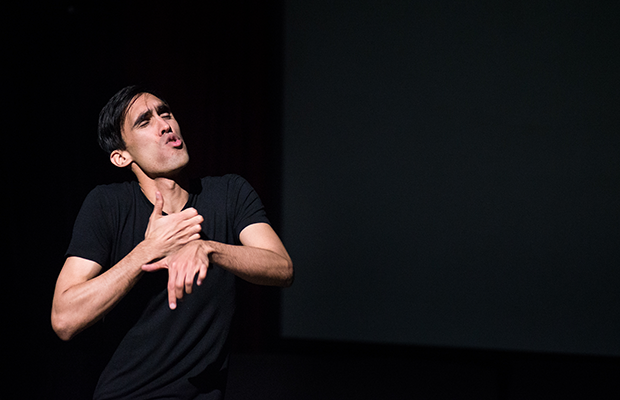 Gabriel Dharmoo isn’t always sure how his live shows are going to go.

“There is always doubt,” he admits, speaking about his performances, which often include experimental vocal techniques, gesture, imaginary folklore, along with humorous notes of ventriloquism and satire.

But whatever doubts Dharmoo might have over bringing his boundary-pushing “post-verbal” compositions to the stage have been eased by the major accolades he has won this year.

The Individualized program PhD student and Matralab participant was just named this year’s recipient of the prestigious Jules Léger Prize for New Chamber Music for his composition entitled Wanmansho.

He was also awarded MusCan’s 2017 Student Composer Prize for his work The Fog in our Poise earlier this year.

'Blurring what is perceived as civilized or uncivilized' 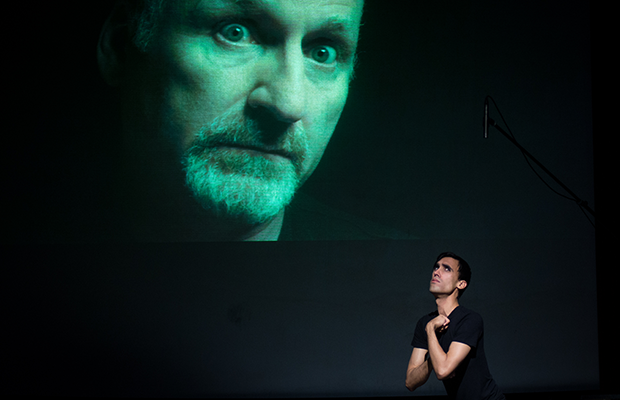 Wanmansho is expressive of his key interests at this moment.

“It includes the two things I am always pushing right now: extending the use of voice in performance, and the theme of imaginary culture.”

The piece, with a title that is a playful nod to the “one-man show," features a narrator figure that must act out the different characters from an imaginary body of folklore.

“The piece revolves around an entertainer character acting as representative of his culture, telling the story of two mythological figures.”

Themes of folklore and imagined cultures appear in Dharmoo’s other works as well. His use of grunts and other raw vocal techniques are intended to encourage the audience to question their expectations of culture.

“I am interested in blurring what is perceived as civilized or uncivilized," says Dharmoo.

His work does not shy from the problems and potentials of interdisciplinarity and cross-cultural exchange: His PhD combines music, theatre and anthropology, and he is supervised by Sandeep Bhagwati, Noah Drew, and David Howes.

'Hybrid adventures in the different languages of music' 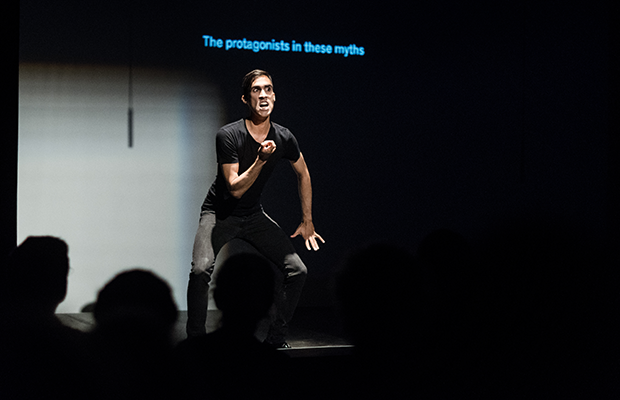 Dharmoo points to the “inter-traditional” aspects of his work with Bhagwati’s Sound of Montreal ensemble as an important influence. The ensemble, co-directed by Bhagwati and Kiya Tabassian, brings together musicians trained in a variety of musical traditions—from Iranian and Turkish to Western styles of jazz or electronic music—and asks them to create work together.

“My position as a bi-cultural person working in a Western context informs what I do,” says Dharmoo, who spent time studying Carnatic music in Chennai, India.

Bhagwati, who serves as Canada Research Chair in Inter-X Art Practice and Theory, sees the hybridity of Dharmoo’s work as a major strength.

“His compositions are hybrid adventures in the different languages of music that make up his different chosen traditions and experiences: compositions aware of a world that is changing away from western dominance and that opens up to the aesthetics, predilections and requirements of a more entangled, multi-ethnic, multi-traditional and polysemic world.”

Bhagwati is glad to see Dharmoo get institutional recognition for his work.

“It is a good thing that the jury of the Jules-Léger Prize has recognized the outstanding quality of this young composer's work and the fervent musicality that shapes every note of his writings,” says Bhagwati.

"It is an even better sign that they have chosen someone who, through his practice, poses a challenge to the concept of new music itself. I deeply respect honorable and hallowed institutions that can question their mode of existence, and in doing so, renew their connection to the community they serve.”

For a firsthand experience of Dharmoo’s work, see his piece Anthropologies Imaginaires on March 7th and 8h at Usine C or his noise opera, À chaque ventre son monstre, with text by Françoise Major, on April 13 at Maison de la culture Frontenac.