Loan from Marinvent will accelerate learning and research
|
By Laurence Miall 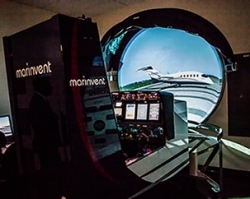 What do you give a leading aerospace school that already has a state-of-the-art flight simulator? An even better flight simulator, of course. A collaboration with Marinvent Corporation, nurtured over the past two years through Concordia’s Office of Research and the Faculty of Engineering and Computer Science, has made this possible, and so helps expand upon Concordia’s existing strengths in this area.

“Aerospace education and research are of vital strategic importance, not only to Concordia, but to Montreal and Canada,” says Robert Fews, director of the Concordia Institute for Aerospace Design and Innovation (CIADI). “With this new simulator, we’re reaping the benefits of our strong industrial partnerships, and our students and researchers will greatly benefit as a result.”

The new simulator, a loan from Marinvent, will live at the Control and Robotics Group, part of CIADI, on the 10th floor of the Engineering, Computer Science and Visual Arts Integrated Complex (EV Building). There it will be of particular help to researchers who work on control systems for aircraft — for example, the kind of technology that makes it possible for a jet to go on auto-pilot. The new simulator can accurately model any existing aircraft — whether manned or unmanned, fixed or rotary wing.

“Having this new research flight simulator brings some distinct advantages,” says Luis Rodrigues, an associate professor in the Department of Electrical and Computer Engineering, and one of Concordia’s leading experts in avionics, a field that encompasses the study of electronic systems used on aircraft, artificial satellites and spacecraft. “I’m thrilled that we have this new tool at our disposal.”

Marinvent Corporation also owns a sleek Italian-built Piaggio P-180 Avanti aircraft. In effect, the simulator can serve as the ground station to this aircraft, which will allow for the research conducted at Concordia to be validated in real-life in-flight scenarios — a welcome stride forward for the experts who will be using it. The simulator will be used to test research algorithms or avionics modules developed by graduate students as well as for in-class demonstrations for undergraduate students.

One of the first “test-pilots” of the new simulator was, fittingly enough, Concordia’s president, Alan Shepard, at the inauguration ceremony held July 8, 2014.