MIGS and the Geneva-based CyberPeace Institute signed a memorandum of understanding to collaborate in supporting the Humanitarian Cybersecurity Center, which aims to safeguard NGOs from cyberattacks.

MIGS’ Executive Director Kyle Matthews participated in the 4th Global Forum Against the Crime of Genocide in Yerevan, Armenia. The forum was organized by the Armenian Foreign Ministry, the UN’s Office of the Special Advisor on the Prevention of Genocide, the International Association of Genocide Scholars, and Global Action Against Mass Atrocity Crimes. 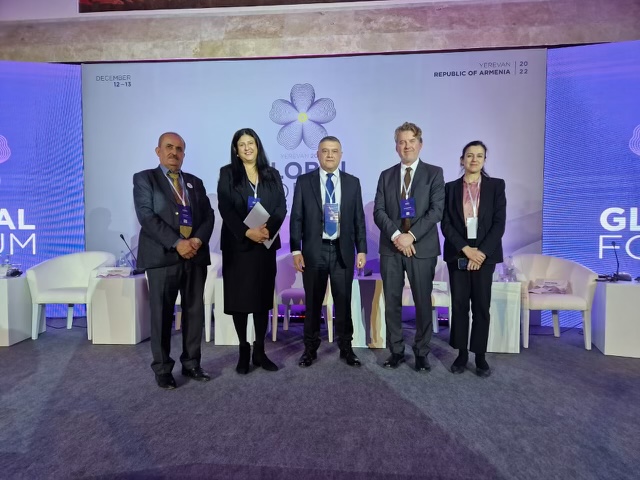 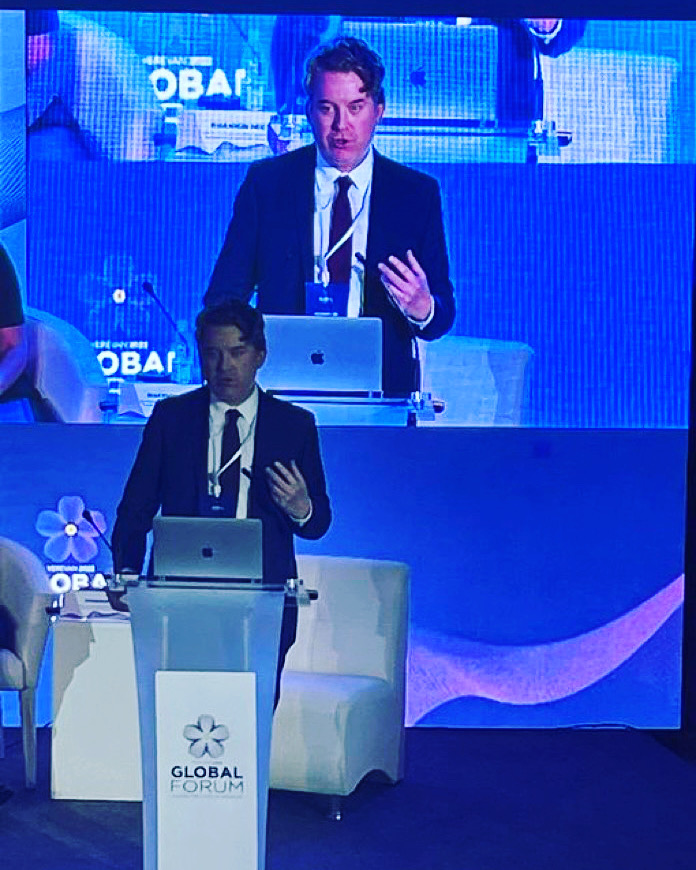 Congratulations to MIGS Fellow Fannie Lafontaine who was named  one of five recipients of the Social Sciences and Humanities Research Council’s (SSHRC) 2022 Impact Award. 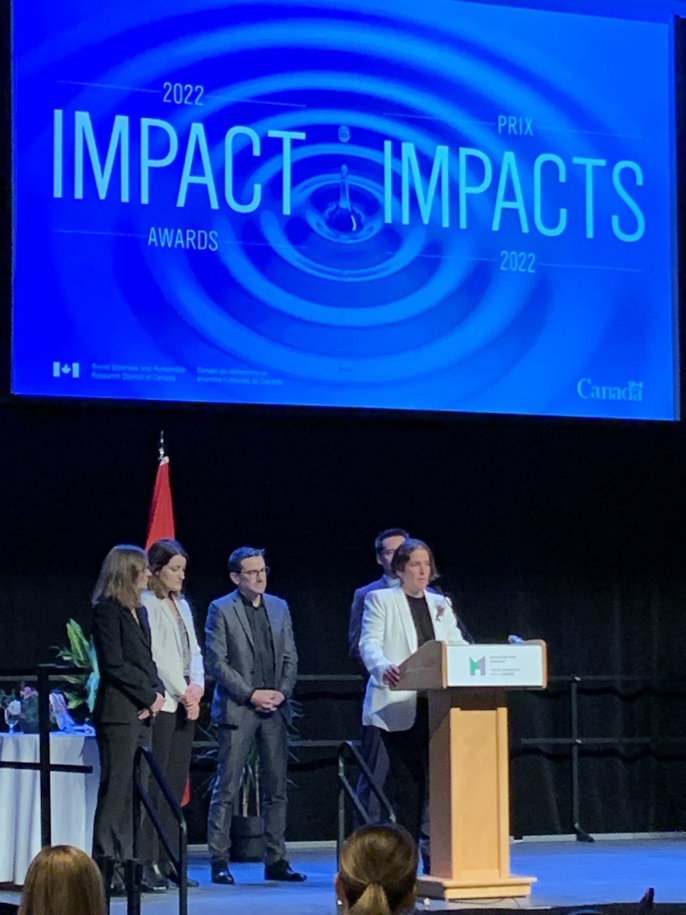 Launched in May, the Global Parliamentary Alliance Against Atrocity Crimes (GPAAAC) brought together parliamentarians and experts from Canada, Germany and EU-member states to construct more strategic responses to the atrocity crimes committed in Ukraine by the Russian military. The Institute hosted four meetings, produced seven podcast episodes and published four op-eds. MIGS produced a short video summarizing the work of its Global Parliamentary Alliance Against Atrocity Crimes in Ukraine. The GPAAAC is an initiative supported by the Konrad Adenauer Stiftung Canada. 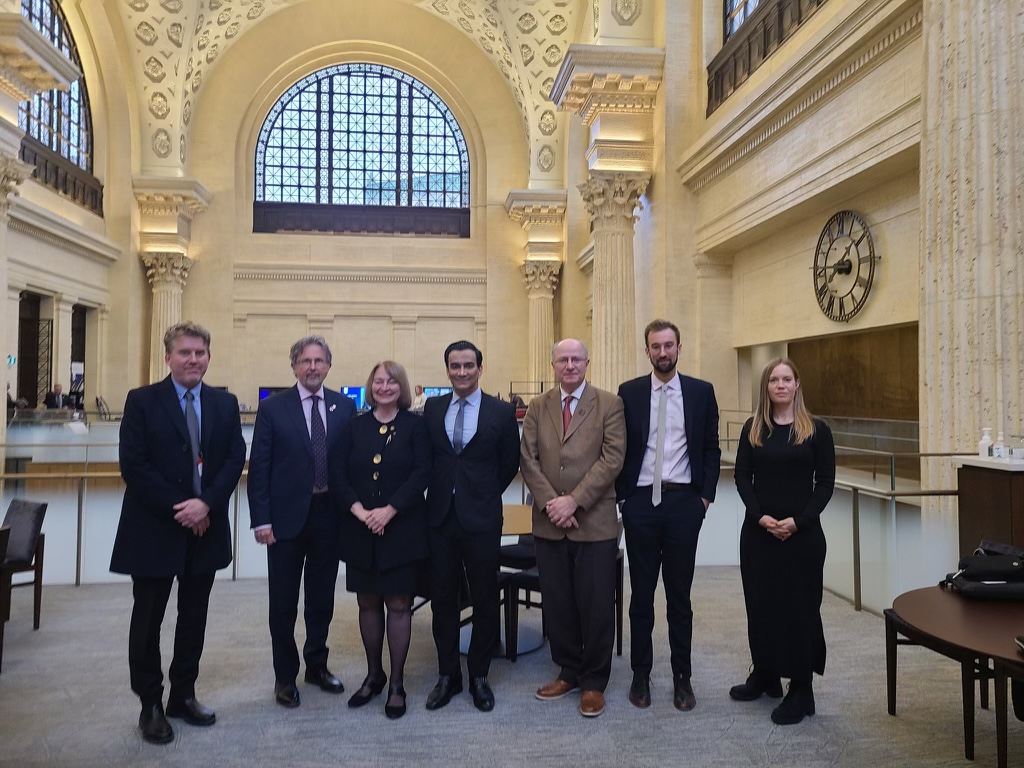 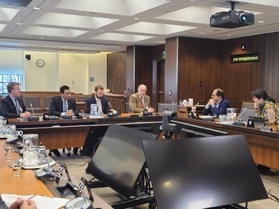 MIGS interviewed Nobel Peace Prize winner Oleksandra Matviichuk about the work of the Center for Civil Liberties in Ukraine and Dr. Aylin Matlé about what the invasion of Ukraine means for Germany and NATO. Eleonora Mongelli, Vice President of the Italian Federation for Human Rights, wrote an op-ed titled “Sanctions: an effective tool for justice delivery”and Philippe Dürr, research assistant at the Institute for Public International Law of the University of Bonn, wrote an article titled “The Role of Parliament in Times of War of Aggression - A German reflection”.

MIGS Digital Fellow Joana Cook moderated a webinar hosted by the International Centre for Counter-Terrorism (ICCT) to mark the release of a report on the use of militarised drones by terrorist groups in the Middle East.

Marie Lamensch participated in a Twitter Spaces discussion on the role of technology in Iran ongoing protests. Listen to the discussion here.

Project Leader Lauren Salim attended the Digital Policy Roundtable discussion on “Polarization and Radicalization” hosted by the Center for Media, Technology and Democracy at McGill University.

Marie Lamensch met with Peter Mills at Stop The Traffik to discuss the war in Ukraine and the risks of human trafficking.

MIGS hosted the Canadian International Council of Montreal for a discussions with Elisabeth Vallet titled “After COVID….Open Border: Gone Forever?”

Marie Lamensch met with Iryna Kopanytsia, CEO of White Ribbon in Ukraine, to talk about her efforts to prevent sexual violence against women in the ongoing war in Ukraine.

MIGS Fellow Naomi Kikoler participated in the “Justice for Rohingya: Nearing 3 Years of the Genocide Case Against Myanmar” webinar organized by the Burmese Rohingya Organization UK. You can listen to the webinar here. 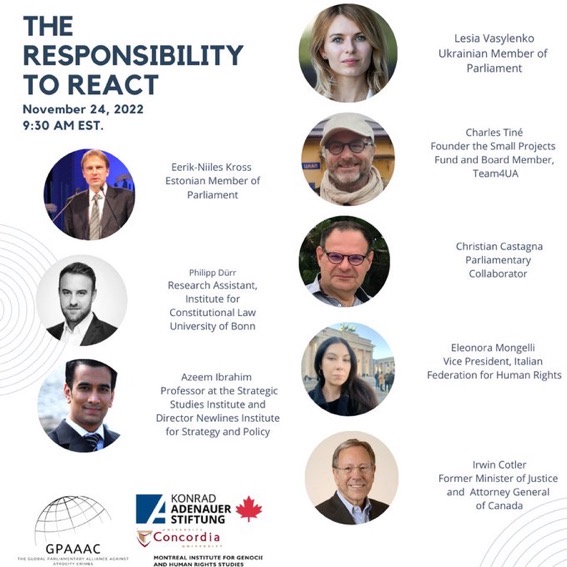 MIGS and Optimum Publishing International hosted British human rights activist and journalist Benedict Rogers for the launch of his book "The China Nexus". The event was moderated by Kyle Matthews and featured a panel discussion with Nury Turkel (Chair of the US Commission on International Religious Freedom), Dominic Cardy (Member of Parliament of the Legislative Assembly of New Brunswick), and Dean Baxendale (President and CEO of Optimum Publishing International). You can watch the event here.

MIGS staff attended an event titled “Prioritizing Prevention: Protecting Children from Atrocity Crimes” organized by UNICEF and the UN Office on the Prevention of Genocide and the Responsibility to Protect.

MIGS Fellow Mark Kersten was a panelist in “The International Criminal Court in Ukraine and Georgia” webinar. You can listen to the recording here. 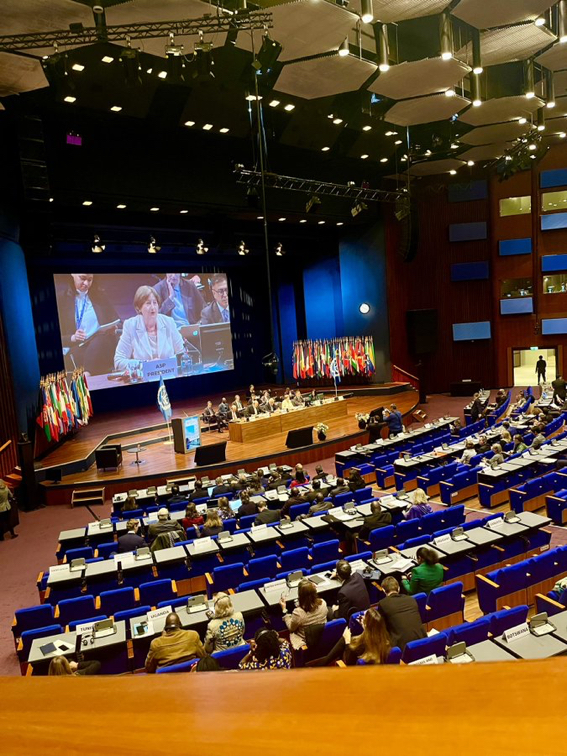 Marie Lamensch participated in the fourth advisory panel meeting of the Stimson Center’s project on digital surveillance in North Korea.

Marie Lamensch was a panelist on the “Towards a More Secure World Online” webinar organized by the Can-Mex Youth Lab, a collaboration between the Canadian Embassy in Mexico and the Mexican Embassy in Canada. 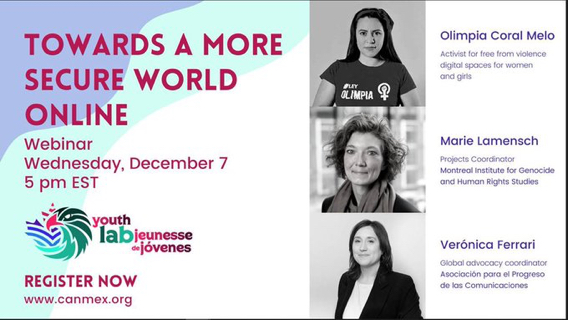 MIGS hosted a meeting on Ukraine with Olivier Védrine (Professor, editor-in-chief of Russian Monitor and member of the board of the February Morning platform) and Murad Kurbanov (Founder and President of the Assembly of Civic Initiatives “Choice”).

To mark the International Day of Commemoration and Dignitiy of the Victims of the Crime of Genocide and of the Prevention of this Crime, MIGS hosted a Twitter Space discussion on Russia’s genocide in Ukraine. Guest speakers inculded Olexander Scherba (former Ukrainian Ambassador to Austria), Iryna Matviyishyn (Ukrainian journalist), Jane Lytvynenko (researcher at the Shorenstein Center) and MIGS Fellow Ewelina Ochab. You can listen to the recording here.

MIGS Fellow Ewelina Ochab wrote an article for Forbes titled “Putin’s Atrocities in Ukraine - Crimes With a Name”. She also published a second article titled “There Can Ce No Peace In Ethiopia Without Justice And Accountability.”

Ewelina Ochab wrote an article for Forbes titled “A Step Closer Towards a Treaty on Crimes Against Humanity”.

Ewelina Ochab wrote an article for Forbes titled “How Iran Underestimated The Outrage Over The Killing of Mahsa Amini”. She also published a second article titled  “The Use Of Starvation As A Method Of Warfare In South Sudan”

Marie Lamensch wrote an article for CIGI titled “To Eliminate Violence Against Women, We Must Take the Fight to Online Spaces”.

Ewelina Ochab wrote an article for Forbes titled “ Dr.Denis Mukwege: the Time has Come to Mobilize Real Political Will to Address CRSV in the DRC”.

Ewelina Ochab wrote an article for Forbes titled “European Commission: Russia Must Pay For Its Crimes”.

MIGS Fellow Phil Gurski wrote an article in The Epoch Times titled “Its Beyond Time Politicians Began Paying Serious Attention to Foreign Interference in Canada”. He also released a new podcast episode titled “It is sad that terrorists get more attention than the victims of their acts”. You can listen to it here.

Ewelina Ochab wrote an article for Forbes titled “What is Happening in China”.

Ewelina Ochab wrote an article for Forbes titled “What Targeting Of Children Has To Do With Genocidal Atrocities?”

Phil Gurski wrote an article in The Epoch Times titled “Chinese ‘Police Stations’ in Canada Amounts to the Presence of a Hostile Foreign Power in Our Front Yard”.