MIGS’ Canadian Task Force to Combat Online Antisemitism next policy dialogue will hold its next policy dialogue on Wednesday, November 17 and focus on the role of social media companies in combating online antisemitism. Speakers include: Guilherme Canela De Souza Godoi (Chief of the UNESCO Section for Freedom of Expression and Safety of Journalists), Peter Stern (Director, Content Policy Stakeholder Engagement at Facebook), Dr. Catherine Chatterley (Founding Director of the Canadian Institute for the Study of Antisemitism), Dr. Michael Geist (Law Professor at University of Ottawa), and Dr. Gunther Jikeli (Erna B. Rosenfeld Professor at the University of Indiana).

Congratulations to MIGS’ Distinguished Senior Roméo Dallaire who will be inducted into Canada's Walk of Fame. It recognizes Canadians from a variety of fields for "their distinctive accomplishments and successes but also for their philanthropy, advocacy, and contributions toward the greater good."

MIGS Digital Fellow Phil Gurski published a new book titled  “The Peaceable Kingdom? A history of terrorism in Canada from Confederation to the Present.”

MIGS Fellow Fannie Lafontaine has been recognized as one of Canada’s most influential lawyers.

A video of the main take-aways of MIGS and Parliamentarians for Global Action’s event titled  “Large-Scale Human Rights Violations in Afghanistan: What Can Be Done to Prevent New Atrocities?” is now available on our YouTube channel.

The International Centre for Counter-Terrorism – The Hague hosted an online event for the re-release of Dr. Joana Cook’s book, “A Woman’s Place: U.S. Counterterrorism Since 9/11, for the 20th anniversary of the 9/11 attacks.” View the recording here.

Kyle Matthews interviewed Kenneth Roth, Executive Director and Human Rights Watch, at an virtual event co-hosted by MIGS and the Montreal’s Council on Foreign Relations. You can watch the discussion here and read a transcript of the discussion on our website. 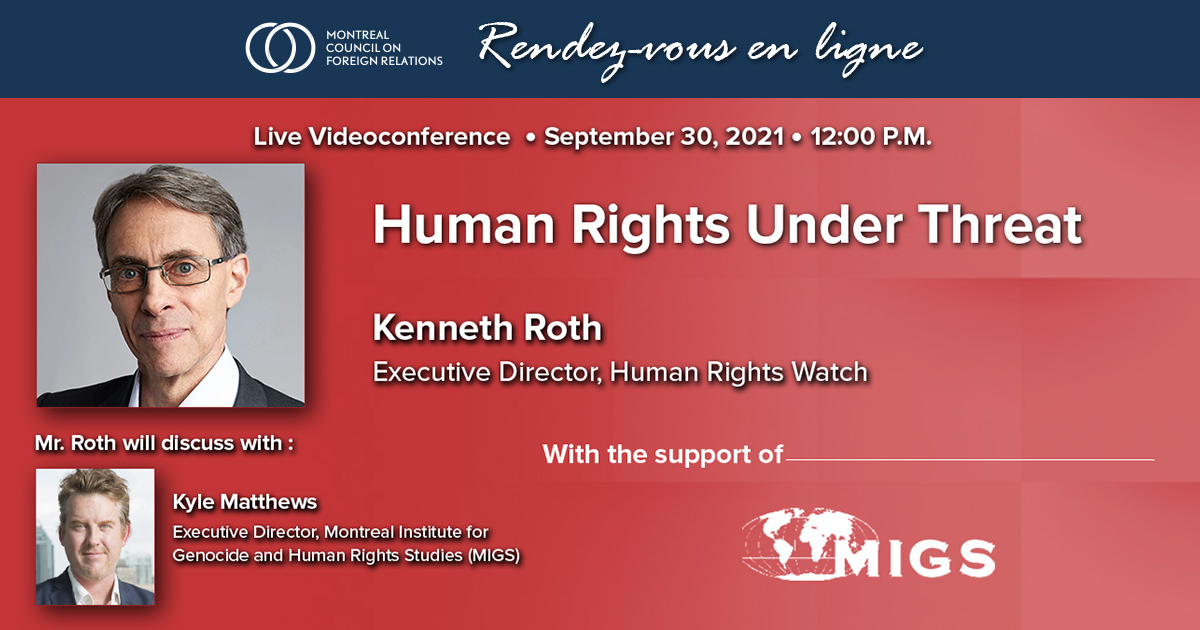 Digital Fellow Ewelina Ochab participated in a panel discussion organized by the Institute for Genocide and Mass Atrocity titled “Responding to the Uyghur Genocide: Assessing Policy and Legislative Options.”

MIGS’ Fellow Naomi Kikoler participated in an event titled “One Hundred Thousand, and Counting: Seeking Justice for Syria’s Disappeared”. The discussion was organized by the Syrian Network for Human Rights and the Syria Campaign on the sidelines of the United Nations General Assembly.

MIGS hosted a Twitter Space with Port Coquitlam Mayor Brad West to discuss the role of mayors in defending human rights at home and abroad.

Kyle Matthews and Lauren Salim attended in the Malmö International Forum on Holocaust Remembrance and Combating Antisemitism. Participants discussed Holocaust remembrance and education, antisemitism on social media platforms, and combating antisemitism and other forms of racism in all spheres of life. You can watch the entire programme here.

MIGS hosted a Twitter Space with its Digital Senior Fellow Phil Gurski to discuss his new book “The Peaceable Kingdom? A history of terrorism in Canada from Confederation to the Present.” 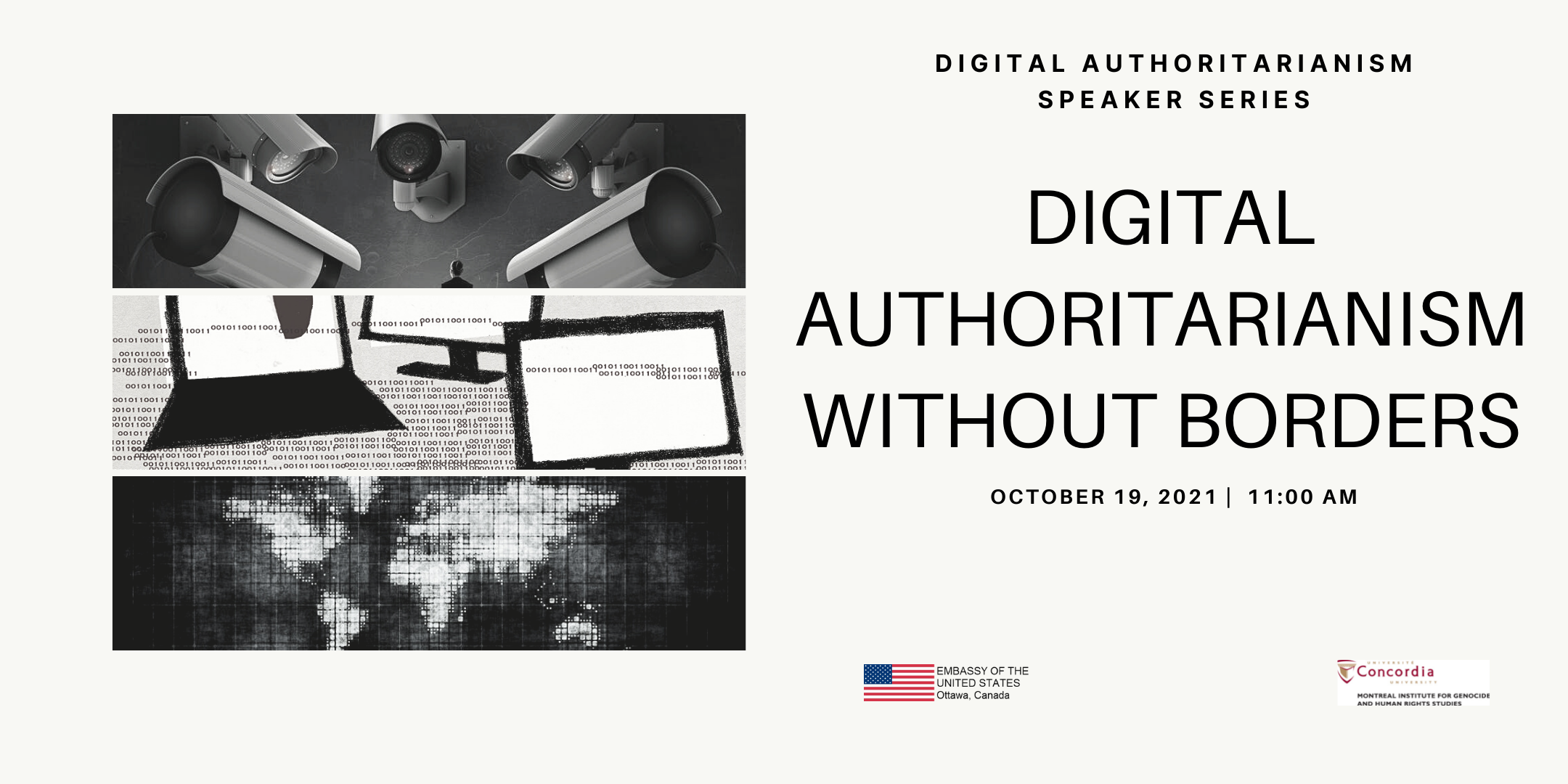 MIGS Digital Fellow Dr. Joana Cook discussed the anniversary of 9/11 in an interview with France24.

Dr. Joana Cook was featured on the podcast Global Coalition Against Daesh in an episode titled “Once an extremist, always an extremist?”

Phil Gurski published a new article on his blog titled “Is all not well with the ‘5 eyes’ intelligence alliance?”

MIGS’s project officer Lauren Salim was quoted in an article titled “Could a Dedicated Disinformation Beat Help Address the Infodemic in Canada?”

Ewelina Ochab wrote an article in Forbes titled “An Apology To The Afghan Girl.”

Kyle Matthews and Lauren Salim wrote an op-ed in the Ottawa Citizen titled “How Canada can help fight online anti-Semitism.”

Project Coordinator Marie Lamensch wrote an article for the Centre for International Governance Innovation titled “Cyberspace Has Rules: It’s Time to Enforce Them.”