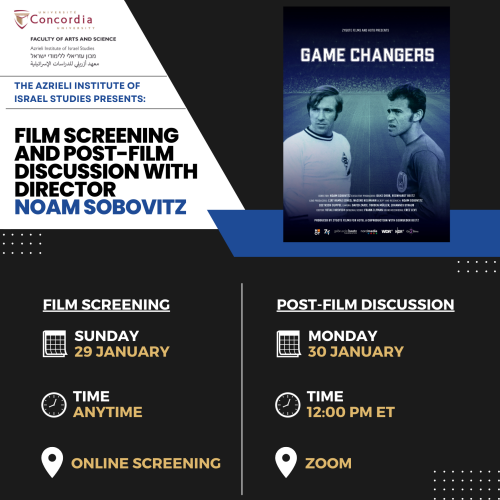 Please join the Azrieli Institute of Israel Studies on Sunday, 29 January, 2023, for a virtual screening of the film, "Game Changers". After registering, the film link and password will be sent to you 48 hours before the screening.

Following the film screening will be a live discussion with Director Noam Sobovitz via zoom on Monday, 30 January, 2023 at 12:00 PM ET.

About the Film:
How did a football match between enemies become a turning point in history? Twenty-five years after the Holocaust, against insurmountable emotional and political barriers and threats of terror, Israel national team and German Borussia Munchegladbach met in a match whose importance marked the beginning of the normalization between Israel and Germany. Through interviews with former German and Israeli footballers, historians, and diplomats, along with rare archival materials, the film examines the power of personal friendships to bring down the wall between nations, and of football, to pave the way between adversaries.