"What to make of the new Israeli Government" - Talk with Dr. Csaba Nikolenyi 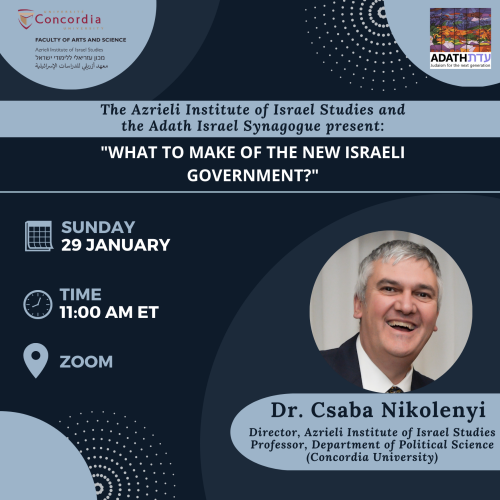 Please join the Azrieli Institute of Israel Studies and the Adath Israel Synagogue on Sunday, January 29, 2023 at 11:00 AM ET for a talk with Dr. Csaba Nikolenyi.

About the Talk:
After almost four years of incessant elections and unstable coalition governments, the November 2022 Knesset elections produced a decisive outcome in favor of the bloc of religious and right-wing political parties united in their support of former Prime Minister Benjamin Netanyahu’s return to leadership. Yet, the apparent return to stability came at the high price of deepening polarization in the party system and growing tensions within Israeli society. Indeed, the formation of Benjamin Netanyahu’s sixth coalition government sparked a wide range of concerns and critical reactions both domestically and internationally. This talk will discuss the key features of the new government, the policies that it will likely adopt and the prospects for Israel's international relations during the sixth Netanyahu government.