We provide an annual course guide for courses in our department, which is downloadable on the right under "course guides." Many courses can fit into multiple categories of requirements. It is recommended that you register as soon as possible, as some courses fill up very quickly. If you have been shut out, but need the course for your major or minor, please speak to an advisor about ways we might prioritize you.

Also note that you do not need to take all your requirements at once. You can and should take some electives even in your first year. Of the total credits for the degree, only 42 are for the major (or 60 for honours). Experiment and explore!

In addition to our regular course offerings, the following topics courses are offered in the 2022-2023 academic year. For the regular course descriptions, please refer to the official undergraduate calendar.

This course follows key trends at the forefront of Canadian recognition of colonialism and its impact on Indigenous people. It will use as its epicentre Concordia - the history of the land where the campus stands, and around it - to enliven our sense of pre-colonial lives and the meaning of contact in the places where we attend and teach classes. It will radiate outward toward the rest of the city that was the earliest area of settlement, to tell the story and the stakes of Christian missionizing and its relationship to colonial power. It will consider the links between local institutional and cultural histories and Canadian Residential Schools, which were initiated by the Federal government and run by a variety of churches and orders, including the Grey Nuns, a key Montreal institution linked with Concordia and its surroundings. We will make use of literary and other creative renderings, attend to the way Canadian cities developed around the colonial facts we explore, while examining, as well, Concordia's platforms for "Indigenization" and "Decolonization."

This course treats the intersection of gender, sexuality, spirituality and religiosity from an intersectional and queer theoretical approach. It introduces students to histories and discourses around these inter-related areas and is organized thematically. It will also address the construction and production of queer spiritualities and the queering of religion. Topics under consideration include, as follows: global sexualities; celibacy, asexuality and queerness; queerness in history; colonial and postcolonial understandings of sexuality and religion; queer pornography; tantric practice and other forms of esoteric spirituality.

Malcolm X was a black civil rights leader who made an indelible impact on North American society, black life, culture, and activism. He was also a devout Muslim. This course explores Malcolm X’s life, his activism and ministry, and his ongoing importance for today. It places particular emphasis on his Muslim faith and the history of the Nation of Islam, of which Malcolm X was a part for much of his career.

This course explores embodied practices and conceptions of embodiment in South Asian religions, including Buddhism, Jainism, Hinduism, and Islam. We will examine bodily disciplines and asceticism, as well as ecstatic practices, possession, and the adornment and celebration of the body. We consider divine bodies and the bodies of animals and plants, gendered bodies, and the body in life and death. We seek to understand the variety of ways that physiology and the senses are linked to the moral, spiritual, and psychological dimensions of human being  - and the methods employed to influence and transform the character of this being.

This course will explore the relationship between film, religion, and traditional spiritual narratives while concentrating on how Canadian film and cultural criticism have approached this topic. Some of the questions we will ask include: What are the special challenges and outcomes of addressing religious themes in film? Cinema has in the course of its development usurped some of the power of organized religion. In what way are films suited to exploring religious narratives and ideas? We will examine the film culture of Canada with an awareness of the influence of American and European film. We will highlight independent films and the output of the National Film Board of Canada, with particular attention to the NFT documentary tradition and the work within that context of Indigenous directors and writers. Students interested in a range of traditions, in the relationship of religion and popular culture, in the relationship between Quebec and the rest of Canada, will be able to pursue these research areas.

This course will explore how popular culture can be understood from a variety of decolonial perspectives. We will explore the relationship between theory and practice, the material and epistemic, as it relates to decolonial action and critique, as well as concrete movements of decolonization like Land Back, Water Protectors, Saytyagraha, and BLM.  From this perspective of decolonial critique we will then analyze a variety of examples in popular cultural that reify or resist contemporary colonial attitudes, and critically evaluate their effects. We might look at popular forms of media like Southpark, the film Fire, sports, holidays, the Ramayana, yoga, comic books, and more! Possible moments of analysis include: cultural appropriation, Orientalism, settler moves to innocence, neoliberalism, Marxism, recentering oral and visual traditions, the White Savior Industrial Complex, and capitalism.

This course looks at the artistic, social, and cultural implications of hip-hop through its intersections with urban, working-class youth cultures in Canada. Focusing on hip-hop’s four primary elements, rapping, DJing, graffiti art, and breakdancing, we will explore the social and cultural influences and historical contexts that shaped each of these forms, as well the connecting principles that they share. We will explore the broader historical, political, and performative context of the African Diaspora experience in the Americas and hip-hop’s subsequent adaptation and mobilization by other disenfranchised minorities who identify with its message. Students will learn about and listen to the music of a range of Canadian hip-hop artists and investigate projects that aim to offer support systems for disenfranchised youth. A particular focus will be on Montreal-based grassroots multi-lingual rap practiced by minority groups. Topics relating to hip-hop production and consumption will include the criminalization of racialized youth, the adaptation of rap music as protest music on a global level, relating to multiple struggles on all sides of the social and political spectrum, as well as its mobilization for localized power-struggles and emancipation.

This seminar-format course will explore connections between the ethics of human interactions with non-human animals and non-sustainable economic activities. The Western cultural tradition has long treated humans and animals as separate categories, with different systems of ethics and values applied to each. How humans perceive their relationship with animals affects choices about diet, understandings of our place in the world, and increasingly, issues of habitat preservation, environmental degradation, and the ethics of scientific research. 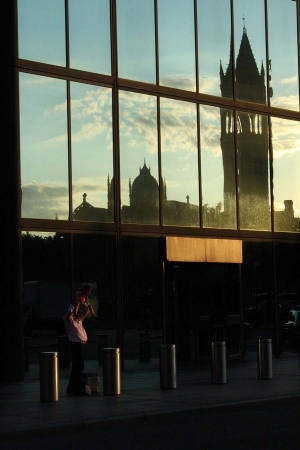 Are you interested in changing your major? Adding a second major? Adding a minor? Doing honours? Our advisor can easily add a second major and minor, and, if you are already in a BA in Arts and Science, change your major. In other circumstances, the advisor will guide you to the correct application procedure. There are many reasons why students are drawn to our programs and there are a number of options available, including a B.A. in Religions & Cultures, Southern Asia Studies, or Judaic Studies.

Check the requirements for the degree - according to the calendar in the year you entered the program - and see which courses fit each requirement. If you are uncertain or it is unclear where a course will fit, please consult the Undergraduate Advisor. Note that except fo the regular B.A. and minor in Religions and Cultures, all 42 or 24 credits should be in courses within the department. You should receive prior permission for courses outside of the department, and you should consult with the undergraduate advisor regarding other programs or courses not explicitly mentioned in the Undergraduate Calendar.