“I didn’t get the permit? Good,” Ettinger says. “That gives me another 30 days to plan and to get my financing in line. I travel halfway across the world to meet investors and spend a week pitching to them, and they still don’t work out? Good. That means I learned what doesn’t work so when I have the next meeting, it will get done.” 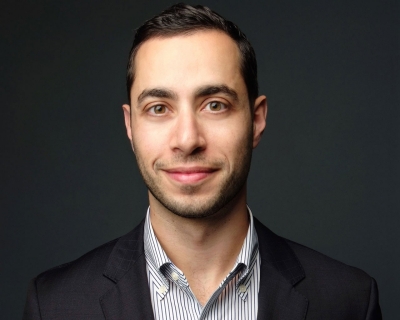 He strongly believes in constant learning and growth. Ettinger regularly buys e-courses and books and attends conferences, even on topics only tangentially related to his business.

“Never, ever think whether you should buy a book or not,” he says. “Just buy it. It just takes the right line, the right paragraph at the right time of your life to change everything.”

It was Ettinger’s love for books that brought him to Concordia’s Liberal Arts College in 2003. Allende, Borges, Cervantes and Paz are among his favourite authors, so he also took Spanish language courses to read them in their original versions. He calls his undergraduate education “probably one of the best investments I’ve ever made.”

For one, knowing Spanish helps on Ettinger’s frequent visits to South America. More broadly, he says reading and interpreting at the Liberal Arts College taught him crucial skills for his business deals.

“The work that you do in business negotiations is really about understanding the argument behind the argument,” he says. “It’s up to you to pick apart what people are saying regardless of what business you’re in.”

Ettinger also remembers the first lesson he learned at Concordia. Frederick Krantz, professor of history and founding principal of the Liberal Arts College, encouraged his students to practice sitzfleisch: a Yiddish word that translates as the art of sitting still and concentrating.

“You have to develop the fortitude to sit and focus,” says Ettinger. “As an entrepreneur it’s especially important because nobody’s telling you what to do.”

Apparently that philosophy has paid off. Ettinger became a real-estate broker at age 19 and worked as a broker all through his Concordia studies. He continued in the field after graduation yet found himself needing more formal business training.

Ettinger decided to attend York University in Toronto and earned his MBA, and was soon after recruited by SmartCentres, the largest real-estate developer in Canada.

He spent a year and a half in SmartCentres’ Emerging Leadership Development program in Toronto before deciding he did not want to be an executive in somebody else’s company.

So in 2011, Ettinger and his father started Perspective. “We only go into projects where we believe that we can create value,” he says.

The business has been successful, and Ettinger is gaining a reputation in Montreal’s business community. Denis Coderre, then mayor of Montreal, invited Ettinger to join a trade mission to Israel in November 2016 alongside other businesspeople and cultural and academic leaders, including Concordia President Alan Shepard.

Ettinger had travelled to Israel many times before and enjoyed hearing the perspectives of those who had never been. “Probably my favourite thing in the world is to experience events through the eyes of somebody else,” he says.

He encourages students and new graduates to seek out people with experiences different from their own.

“Learn about things outside of your major. People tend to develop these weird identities for themselves,” Ettinger says.

“They’re like, ‘Oh, I’m a lawyer, I’m an engineer, I’m an arts major.’ Who cares? Don’t get trapped in an identity when it comes to your learning.”