In November, Vicky Boldo, the Otsenhákta Student Centre’s In-House Cultural Support Worker and a member of the Indigenous Directions Leadership Council, was appointed to the permanent Board of Directors of the National Sixties Scoop Healing Foundation.

“I began to better understand my assimilation and the political policies involved when I received my original adoption file as young mother,” Boldo, who is a Sixties Scoop Survivor, explained. “For over 26 years I have worked hard at reconnection and reclamation of identity and culture; our healing is a lifelong journey.” 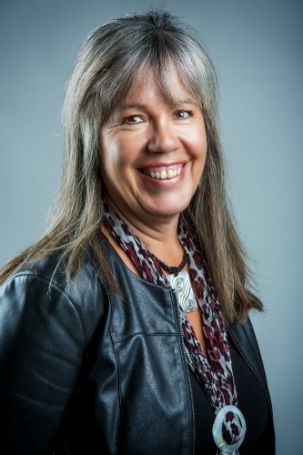 As a result of the $800 million National Sixties Scoop Settlement in 2017, an initial $50 million was provided to establish a foundation that is independent of the government. From September 2019 until February 2020, a survivor-informed engagement process occurred. Traveling through 10 cities, the process set out to answer questions about what the Foundation should do and who it should be governed by.

In August, the Foundation published The National Survivor Engagement Report, which included recommendations for a survivor-led permanent board. The Foundation sought a board of directors that would be representative of those affected by the Sixties Scoop, which lasted from 1951 to 1991. Boldo is one of ten directors that were appointed to the board during the Foundation’s initial launch on November 12.

“Life as First Vice-Chair on the board has been very busy to say the least,” Boldo said. “Since the new year, we have committed to bi-weekly meetings and weekend strategic planning sessions. We look forward to bringing some of these outcomes to the community later in the spring.”

Boldo considers being appointed to the board of the National Sixties Scoop Healing Foundation as a “very high honour.” She described her time on the boards of various schools while raising her children, the Native Women's Shelter, The First Peoples Justice Centre, the National Indigenous Survivors of Child Welfare Network, and the IDLC as having raised her up, giving her confidence, perspective and experience.

“Over the past ten years I have been involved in research, community work and activism that is directly tied to child and family services,” Boldo explained. “Giving of myself, my time, my energy and my resources to healing, decolonizing, reconciliaction and raising awareness comes from a place of passion and childhood dreams.”