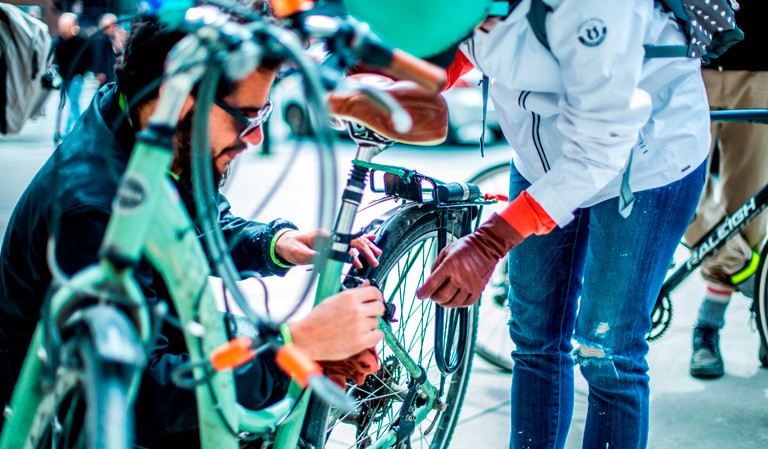 Vélo Quebec has awarded a silver medal to Concordia for its efforts in accommodating cyclists travelling to and from the Sir George Williams and Loyola campuses.

Bringing together the province’s cycling community since 1967, Vélo Quebec is a non-profit organization that aims to promote the use of bicycles for transportation, recreation and tourism.

The group’s VÉLOSYMPATHIQUE program recognized the university — alongside Université Laval, Université de Montréal and Université de Sherbrooke — for its great cycling culture, infrastructure and promotion of the activity.

“We’re excited that the infrastructure and services that we offer cyclists are having an impact,” says Cassandra Lamontagne, sustainability coordinator with Concordia’s Office of Sustainability. “There is still room for improvement in terms of incentivizing and supporting cycling on campus.”

The VÉLOSYMPATHIQUE program awards organizations with bronze, silver and gold certifications. It was inspired by the Bicycle Friendly America program and launched by Vélo Québec in 2015. The criteria used by the program’s panel of six judges include available infrastructure and services as well as strategic planning, educational programming and encouragement for cyclists.

The Sir George Williams Campus first received silver certification in 2016. This time it earned additional marks based on the increase in availability of bike parking on campus, as well as improved services related to the secure bike parking facility, located in the basement of the J.W. McConnell Building.

The Loyola Campus received silver recognition for the high number of bike spaces available for cyclists — including 72 spots that remain accessible for winter cyclists! On both campuses, Vélo Québec highlighted Concordia’s educational bike-related events, held in September and May, peak cycling periods for the university community.

In three years, when it comes time to renew its certification, Lamontagne says Concordia will be aiming for gold.

“This was our first time seeking certification for Loyola, and we’re pleased to know that both of our campuses merit a silver rating. As part of our upcoming Sustainability Action Plan, we are aiming to provide even more support for our cycling community as a means of lowering our emissions from commuting and encouraging sustainable transport,” Lamontagne adds.

Moving forward, she hopes even more people take advantage of Concordia being an extremely bike-accessible university.

“We’re very lucky to have both campuses directly on major bike routes. Some people cycle to work or to school from as far away as the South Shore, and I would like to make everyone aware of what’s possible and how we can help.”