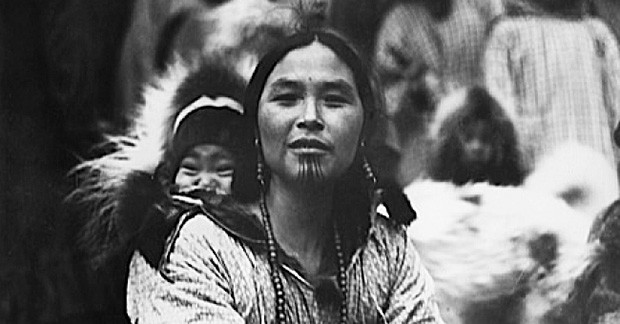 What happened to the ancient Inuit tradition of face tattooing — forbidden for almost a century and nearly lost?

Concordia is Cinema Politica’s founding location for its network of more than 100 worldwide chapters that screen alternative, political documentary films.

The launch event will include a program of short films and videos by Indigenous artists from across Turtle Island (North America), a presentation featuring Heather Igloliorte, an assistant professor in Concordia’s Department of Art History and research chair in Indigenous art history and community engagement, and a post-screening discussion with Igloliorte, Tunniit director Alethea Arnaquq-Baril, and Nakuset, executive director of the Native Women’s Shelter of Montreal.

“Tunniit is the perfect film to launch the program because it casts a light on the colonialization and the missionization of the Arctic,” says Igloliorte. “It looks at how those legacies affect the Inuit now, but also the Inuit cultural resurgence.”

Igloliorte also believes that the film is a good choice for the launch because of the way it highlights women’s leadership and respect for the guidance of elders in reclaiming Inuit cultural identities.

“The new program is a promising direction for Concordia, where there’s already a lot of interest and support for initiatives involving Indigenous cultural research and studies.”

Ezra Winton, BA 05, MA 07, Cinema Politica's co-founder and director of programming, says they were delighted to receive more than 150 submissions for the series.

“Our Indigenous and non-Indigenous programmers worked together under the guidance of Indigenous cultural advisors, to create a program of over 20 cinematic works, divided into four thematically grouped clusters.”

These clusters will be shown at Cinema Politica locales across Canada from February to May 2016.

As Winton explains, it was necessary for Cinema Politica to curate a program dedicated to Indigenous cultural expression because much of it is overlooked by mainstream cultural institutions.

The launch of Cinema Politica’s new Indigenous-focused program, First Peoples, First Screens, takes place on Monday, February 8 in the Sir George Williams University Alumni Auditorium of the Henry F. Hall Building (1455 De Maisonneuve Blvd. W.) at 7 p.m. A suggested donation of between $2 and $5 will be accepted at the door.

Community and public engagement are deeply rooted in the Concordia identity. Read more about Embrace the City, Embrace the World, one of Concordia’s nine strategic directions.