Jean-Pierre Gauthier and other Concordia artists present digital arts projects at the International Conference on Robotics and Automation
|
By Dave LeRue
Source: Faculty of Fine Arts 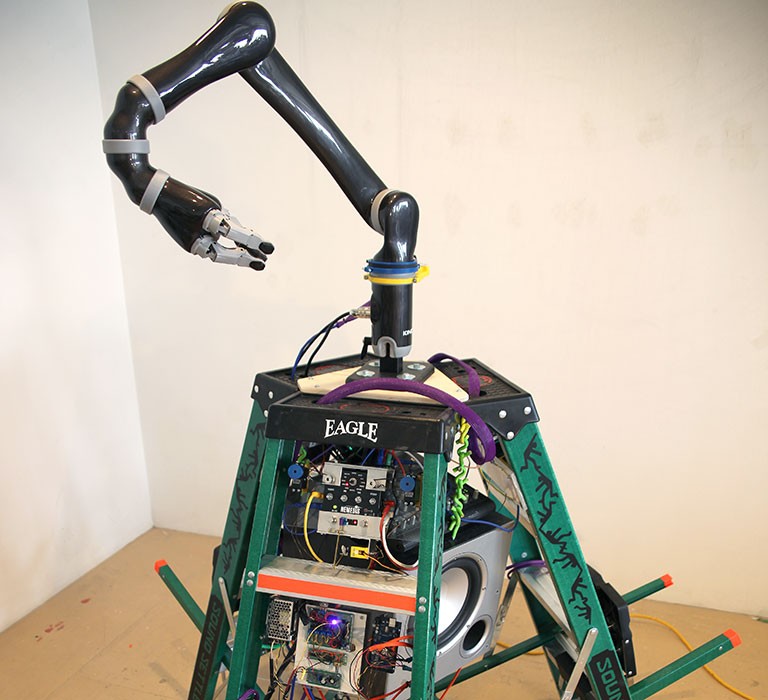 Jean-Pierre Gauthier's digital artwork Sound Settler, on display at the International Conference on Robotics and Automation (ICRA) in May.

When the death of the NASA Mars rover Opportunity was confirmed last February, many sky-watchers and virtual space explorers felt they had lost an essential connection to Mars.

Not artist Jean-Pierre Gauthier. He has already built a new Mars robot – one that makes music on the red planet – in his latest digital art piece called Sound Settler, on display at the International Conference on Robotics and Automation (ICRA) in May and at the Electra’s International Digital Art Festival in June.

‘A sound colonization of Mars’

Gauthier, an artist-in-residence in the Department of Studio Arts’ Intermedia and Computer Arts (IMCA) program, has made an interactive robotic sound piece that uses Kinova robotic arms designed and manufactured in Quebec.

Users are invited to move the robotic arms in any direction. Their actions are remotely mirrored by a second Kinova arm which activates a series of musical devices. Music is made through electrical charges that the mirror arm produces as it moves. The charges initiate digital processes and sound pedals making a rhythmic and repetitive music. Gauthier says this music-making is a communicative process between the user and the robot.

A third arm presents the musical arm on a digital Martian landscape making music on the red planet. The remote relationship between robot, artist, spectator and planetary colonizer is a comment on the role that an artist might play on a future Martian colony.

“I would love to have this work fill the empty Martian landscape with new, extra-Martian sounds. Like a sound colonization of Mars,” he says.

‘Students are always working with new software and technologies’

During his residency at Concordia, Gauthier teaches undergraduate and graduate students in the Intermedia and Computer Arts (IMCA) program. Originally trained as a painter, Gauthier is largely self-taught in the field of robotics and draws inspiration from the field’s DIY history.

“Kinova arms themselves were developed by Jacques Deguire in his garage, as mobility assistance for those with Muscular Dystrophy,” says Gauthier.

This ‘inventor attitude’ generates lively discussions in the classroom, he says.

“Coming to Concordia was good for me because it put me in a learning situation,” he says. “Students are always working with new software and technologies that forces me to learn new things and keep my knowledge fresh.”

He worked on Sound Settler with MFA student Jean Francois Robin to turn a digital mesh into the Martian landscape.

‘We want to diverge from the ‘man controlling the machine’ trope’

For the first time, ICRA will features student work and Gauthier is to co-curator of the student exhibition with UQAM professor Alexandre Castonguay.

One of the works to be shown is a collaboration between students Emma Forgues and Sam Bourgault in the Computational Arts program. Pero sans Cimon is a response to the Roman story of charity, a woman who breastfeeds her father while he’s awaiting execution.

“This story is one of the first occurrences of women using their bodies as a means of production,” says Bourgault. “The woman in the story is only good because she feeds her father.”

Bourgault and Fourges have worked together for three years on both installation and performance art. They explored soft robotic materials like silicone, using it to represent mammary glands suspended in air. They fill and empty using an air compressor system controlled by computer software. Beneath the glands is a carafe, which never fills and thus the machine must produce indefinitely.

“We’re always trying explore the organic and softness through a technological perspective.” says Fourges. “We want to diverge from the ‘man controlling the machine’ trope that is often the case in this field.”

‘Roboticists are Doomed without Artists’

The International Conference on Robotics and Automation (ICRA) in Montreal is the first international robotics conference to directly address the importance of artists to the field of robotics research and to its social and cultural impact.

Intermedia Professor Bill Vorn will speak on an expert panel entitled “Roboticists are Doomed without Artists.”

The main hall of the conference will feature Vorn’s work Mega Hysterical Machine, 2010 as well as Sound Settler and other digital art works curated by curated by ELEKTRA, an organization that presents and promotes digital artworks.

Go see digital art at the ICRA conference in the Palais des congrès from May 20 – 24 and the Electra festival from June 11 – 16.