A new Canadian study has found that older people with insomnia are at greater risk of developing memory decline and long-term cognitive impairment such as dementia.

The study, published in the journal SLEEP, is based on data from more than 26,000 participants of the Canadian Longitudinal Study on Aging, all aged between 45 and 85. The researchers compared completed self-reported evaluations of sleep and memory and neuropsychological testing in several cognitive domains from 2019 and a follow-up in 2022. Participants who reported worsening sleep quality in that three-year interval also had greater odds of reporting subjective memory decline.

“We found that insomnia specifically was related to worse memory performance compared to those who have some insomnia symptoms alone or no sleep problems at all,” says the study’s co-lead author Nathan Cross, a postdoctoral fellow at the Sleep, Cognition and Neuroimaging Lab. “This deficit in memory was specific, as we also looked at other cognitive function domains such as attention span multi-tasking. We only found differences in memory.”

Jean-Louis Zhao at the Université de Montréal was the study’s co-lead. Lisa Kakinami and Thanh Dang-Vu of the PERFORM Centre contributed to the study, as did Chun Yao and Ronald Postuma from McGill University and Julie Carrier and Nadia Gosselin at UdeM. 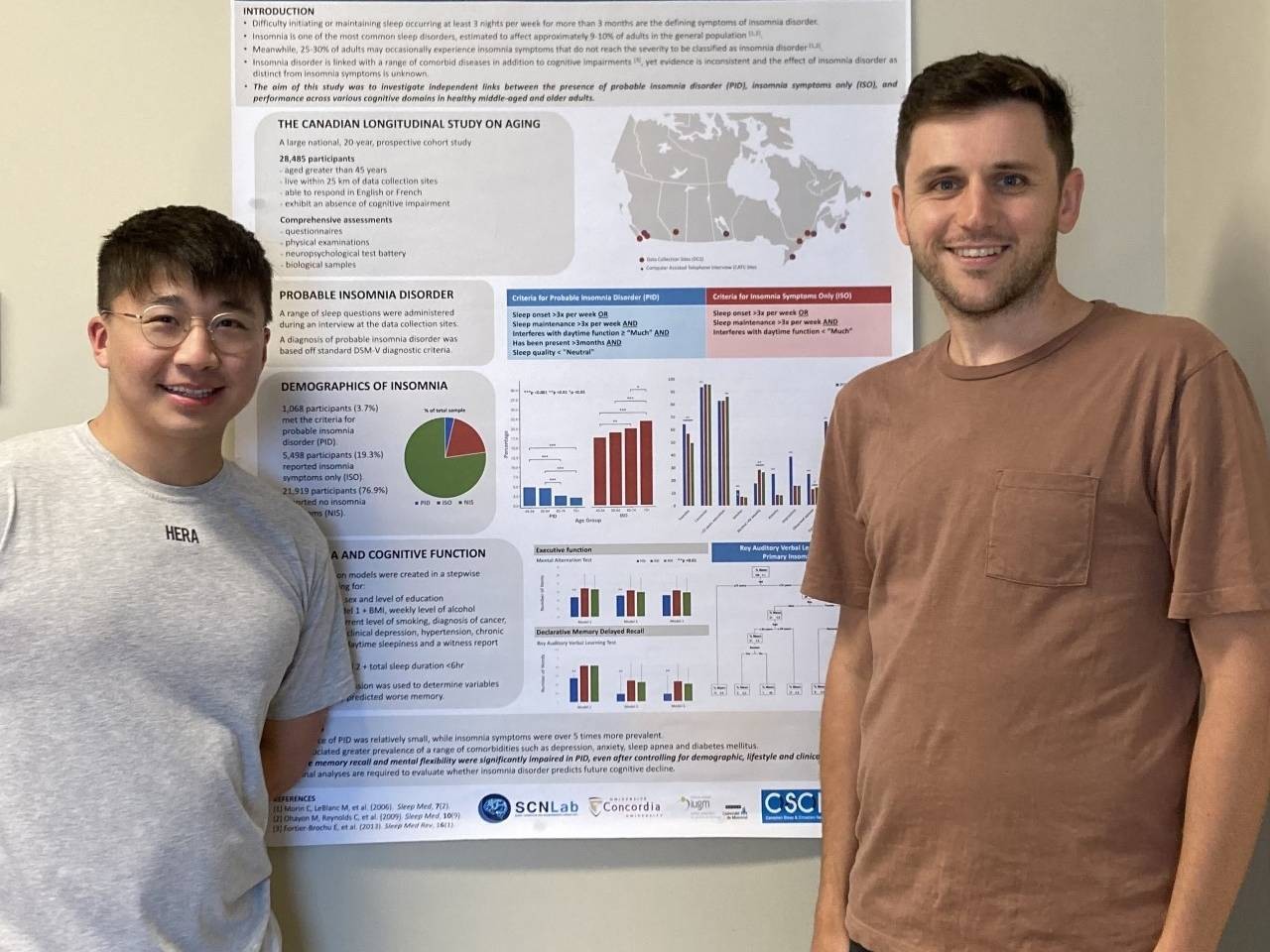 Big data and a sharp focus

Unlike previous studies on sleep quality, Cross says, this one benefits from its very large data set and its focus on sleep disorders. Insomnia, he points out, has been classified as a psychological disorder in the Diagnostic and Statistical Manual of Mental Disorders, the primary reference handbook used by physicians worldwide. Insomnia is not just tossing and turning for a time before bed: “A diagnosis requires symptoms of difficulty falling asleep, staying asleep or waking too early three nights a week over a period of three months. Additionally, those with insomnia must report that this sleep problem causes them difficulty in the daytime,” Cross explains.

For this study, the researchers grouped their subjects into one of three categories: those who reported no sleep problems at the 2019 baseline, those who had some insomnia symptoms and those who developed probable insomnia. When they looked at the data from 2022 follow-up, those who had reported a worsening of sleep quality — from no symptoms to some or probable insomnia, or from some symptoms to probable insomnia — were more likely to report memory decline or have it diagnosed by their physician. They were also more likely to show higher prevalence of anxiety, depression, daytime sleepiness, have breathing interruptions during sleep, other sleep-related issues, smoking and a greater body mass index (BMI) score. All of these are considered risk factors for cognitive decline and dementia. Additionally, the study found that men with insomnia perform worse on memory tests than women, suggesting that older men may be at greater risk.

“However, there is some good news: sleep disorders like insomnia can be treated,” Cross adds. “This highlights the importance of properly diagnosing and managing insomnia as early as possible in older adults. Adequately treating insomnia disorder might become an important preventive measure for cognitive decline and mitigate the incidence of dementia in later life.”

The Canadian Longitudinal Study on Aging is funded by the Canadian Institutes of Health Research and the Canada Foundation for Innovation, as well as the provinces of Newfound and Labrador, Nova Scotia, Quebec, Ontario, Manitoba, Alberta and British Columbia.

Read the cited paper: “Insomnia disorder increases the risk of subjective memory decline in middle-aged and older adults: a longitudinal analysis of the Canadian Longitudinal Study on Aging.”