Elizabeth Fast: “There is a real sense of loss and grief from losing traditions. We were seeing a lot of interest in relearning and reclaiming them.”

Indigenous traditions often place land at the centre of their cultures. However, with more than half of Canada’s Indigenous population now living in urban areas and Indigenous communities struggling to overcome legacies of colonialism defined by assimilation and land theft, that connection is getting frayed.

Elizabeth Fast, an associate professor of applied human sciences in the Faculty of Arts and Science, wanted to help Indigenous youth reconnect with their cultures in safe and accessible ways. Along with a youth advisory group composed of Indigenous youth (some of whom are also students), she has been organizing a series of land-based learning retreats revolving around Indigenous traditions and ceremonies.

The first, held in July 2018, is the subject of a new paper published in the International Journal of Indigenous Health.

“The youth participants found the retreat extremely nourishing,” Fast says. “It provided many opportunities they’ve never had before to spend more time with Elders and Knowledge Holders to learn more about ceremonies and to connect with land-based learning. We explicitly created a cultural safety framework that welcomed different levels of connections with one’s identity, including gender and sexuality.”

The Restoring Our Roots project has since evolved into a five-year Land As Our Teacher participatory action research project exploring the ways land-based pedagogies benefit Indigenous youth. 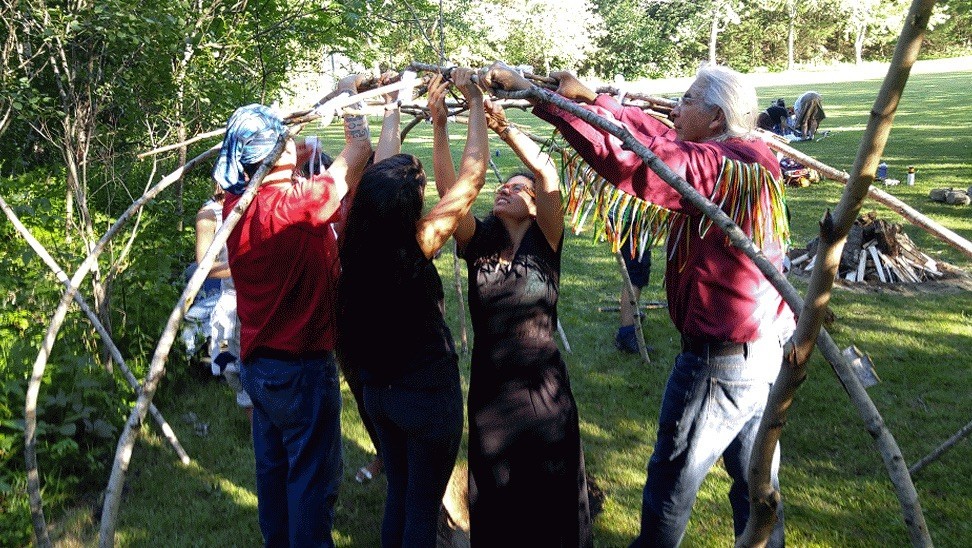 Once-banned cultural practices now out in the open

Restoring Our Roots would not have been possible without input from the project’s youth advisory committee, many of whom also participated in the program. By helping to develop the framework, pedagogical content, ethics and other aspects of the four-day retreat, they were able to come up with programming that was educational, culturally appropriate and inclusive.

Over the course of the retreat, the participants were mentored by Elders and worked with artists, community leaders, storytellers and other young people who guided them through activities meant to help them (re)connect to their Indigeneity. These included cultural workshops, arts-based activities, ceremonies, sweat lodges, medicines and storytelling sessions. All of it was centered around relationship with the land.

“Our ancestors grew up learning from and on the land. It was a way of life and still is for some,” Fast says. “But for many Indigenous people, even those living in communities, it is less so because many of our cultural practices and ceremonies were banned. There is a real sense of loss and grief from losing those traditions. We were seeing a lot of interest in relearning and reclaiming them.”

She adds that the retreat specifically made space for LGBTQ and Two-Spirit youth hoping to reconnect to their heritage — a group often cut off or separated from their wider communities.

“Many of these youth have moved away from ceremony or accessing land-based learning because they might feel the impact of colonization around gender and sexual identity norms even more,” she says. “If they feel they are going to experience transphobia or homophobia, they might just assimilate and move away from their cultures or communities.”

Fast is now organizing a queer-only retreat for Indigenous youth this summer, despite the overall positivity and inclusion seen in past retreats.

“I think the sense of belonging is very important for Indigenous youth, especially for those who have felt disconnected for many reasons,” she concludes. “It increases their courage to reconnect and can lead to some healing of intergenerational trauma. It also can be a foundation for deeper and better relationships with the land and help them get away from their technology-heavy lives to provide an experience many of them never had before.”

The Land As Our Teacher project is funded by the Social Sciences and Humanities Research Council of Canada (SSHRC).

Read the cited paper: “Restoring Our Roots: Land-Based Community by and for Indigenous Youth.”