Christine Jones, BFA (design for the theatre) 89, admits that if she had her druthers, instead of a night at a Broadway musical she’d be at a punk rock show, dressed in dark army boots and a leather trench coat, jumping around a mosh-pit with her friends and rocking out to blaring guitar riffs. That attitude may be somewhat surprising coming from someone who makes her living designing musical sets on the Great White Way and who recently took home a Tony award at the American Theater Wing’s annual presentation. 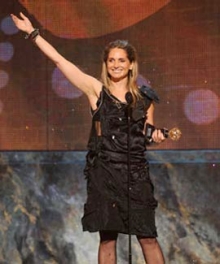 Jones’s edgy sets exude a punk rock feel and are, as the New York Times recently gushed, “simple but spectacular.” But for all the praise, she says she’s still an outsider in an industry intent on mass-producing Disney stage adaptations held together by a toothpick-thin plot. “I don’t really like musicals,” Jones says without a second of hesitation.

“Most musicals have terrible music. And the stories tend to be kind of dopey and it’s just not my scene.” Dressed in black, with metal screw earrings adorning her ears and dog-tag chains around her neck, Jones is certainly more hipster than theatre geek. But she is well aware of the irony, especially considering that her last two ventures have been veritable hits.

After a decade of working on a number of Off Broadway shows and one short-lived Broadway musical, Jones’s breakthrough came when she designed the sets, props and furniture for Spring Awakening, a musical that was anything but mainstream when it premiered Off Broadway in 2006. Based on an adaptation of a controversial 1891 German play, Spring Awakening depicted teenage suicide, masturbation, homosexuality and rape, all set to an alternative rock score. It moved to Broadway less than a year later and went on to win eight Tony awards, including Best Musical, with the New York Times proclaiming: “Broadway may never be the same again.” Jones was nominated that year for scenic design but lost to a show diametrically opposed to her artistic aesthetic: Disney’s Mary Poppins.

Jones explains that traditional Broadway scenery, where the sets are painted, grandiose and whimsical in tone, are usually the most lauded. Conversely, her Spring Awakening set evoked a dark, sober tone with little more than a few wooden chairs, brick walls and neon lights. Jones reveals that her alternative style is not a cognisant choice: “When you sing, your voice is your voice. When I design, that’s just the way it comes out of me, in that deconstructed style.”

Jones says being nominated was a thrill — especially since she had given birth to her second child just five days prior to the 2007 Tony Awards ceremony. “I hadn’t been able to shop for a dress because I didn’t know what size I would be or if I would be able to go at all,” she recounts. “But a costume designer friend lent me something to wear, and my mom came from Montreal and babysat so my partner [actor Dallas Roberts] and I could go. I had to hide a breast pump in my handbag because you literally can’t go that long without nursing. It was a crazy evening.”

The love of her professional life

Although Jones is in a committed relationship, she is very open about her feelings for another man: Spring Awakening director Michael Mayer. “I usually fall in love with my directors in one way or another,” Jones says.

Mayer reveals that the feeling is mutual. “We fell in love with each other as artists and collaborators,” Mayer says. “I think this a metaphor for the way that we created these pieces together, in much the same way that parents conceive and raise children. The plays are our children.” He adds, “I adore her rebel spirit and deep artistry.” That’s why when Mayer decided in 2008 to tackle a stage adaptation of punk rock group Green Day’s album American Idiot, he immediately asked Jones to come onboard—and she did.

Jones admits she wasn’t much of a Green Day fan before she began working on the musical, but then listened to the band’s oeuvre repeatedly and “really fell in love with their music.” Part of the creative journey for the designers was to see the band play live and grasp its vibe in concert to translate to stage. “It’s the closest I’ve ever come to feeling like working in the rock ’n’ roll world,” Jones says. 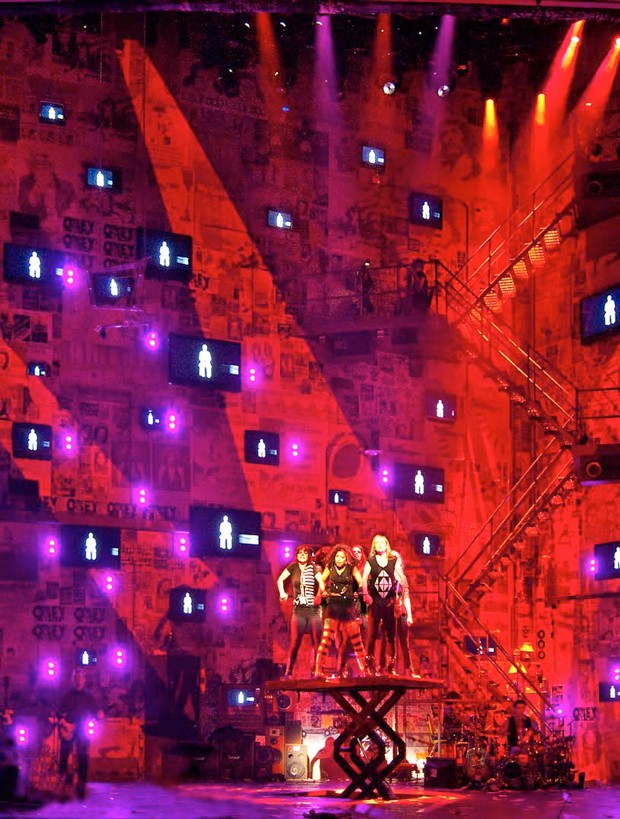 The album American Idiot (2004) explores an America in which politicians and the media dictate to a nation of followers. The musical depicts rebellious youths who break out of suburbia and deal with angst, relationships, drugs and war.

The members of Green Day were involved in the process of staging the musical, giving Jones input on some of her sketches and on the model of the stage she designed. In order to get the signature distressed look of the band’s guitars, Jones met Green Day’s guitar stylist so she could imitate the techniques for the show’s instruments. She worked for about a year on concept and design (she was in charge of the set and all the props and furniture) before the show was mounted for its pre-Broadway tryout at California’s Berkley Repertory Theater in 2009.

The result is pure Christine Jones. The set looks like a punk bar, plastered with rock-band posters and newspapers and adorned by 43 television sets that display rapid-fire images depicting everything from former president George W. Bush to Britney Spears to the Iraq war. “We wanted to give it as much energy and kineticism as a rock show. We wanted it to feel alive,” Jones says. “It was less about what it looked like and more about what you feel sitting in your seat. From the moment it starts, it never stops. Like you are on a ride.”

Another rollercoaster ride for Jones began May 4, 2010, after learning that she had been nominated for a Tony Award for American Idiot. While the show was also nominated — for Best Musical — director Michael Mayer was not, making the moment bittersweet for Jones. “A friend of the director said: ‘You can’t be the prom king and the punk rocker.’ If you are going to do something bold and aggressive, then you may not also to be nominated for those kinds of awards,” she says.

When Jones attended the American Theater Wing press conference to discuss her nomination just 24 hours after it was announced, she says she felt that one of the main creative forces was left out. When asked a question about her theatre mentor, however, she seemed to perk up. “I definitely had amazing teachers along the way,” says Jones, who had once trained to be a ballerina. “One [teacher] in particular — Victor Garaway — got me off the stage and backstage.”

Garaway is her former Marianopolis College professor. In the late 1980s, Jones was studying English Literature at Concordia but was immensely unhappy. During her spare time, she would help design and build sets with Garaway. While working on an adaptation of Fyodor Dostoevsky’s Notes from the Underground, he told her, “I think you should be a scenographer.” Jones, baffled, thought he had said “stenographer.” “No, scenographer,” Garaway replied. “You create the environments for the play.”

Garaway says Jones possesses natural talent: “She intuits how to render the dramatic themes into visual expression and is prepared to spend the time necessary to meticulously realize the details of her designs into set pieces.”

At that time, Concordia had a burgeoning Design for the Theatre program, led by a handful of dedicated professors that included Eric Mongerson. “Concordia’s program has always emphasized the conception of individual artists, whereas other schools teach the proper way to do things— where you learn a traditional method or the particular style of the teacher, which may not fit the student’s artistic sentiment,” says Mongerson, who’s still at Concordia.

Mongerson remembers Jones well. He recalls the time when a panel of Jones’s professors evaluated her portfolio. “She got very favourable reviews but she broke into tears because she was very self-critical. She wasn’t experienced enough to understand her own talent yet,” Mongerson relates.

For her part, Jones remembers the university as a place where she was able to branch out into many facets of theatre design. “Concordia’s program is wonderfully eclectic; you are more like a scenographer/production designer. You do costume, sets, lighting and study directing and acting while taking art classes. It’s not quite as specialized as [theatre programs] in the United States, where you pick one discipline,” she says.

After graduating from Concordia, Jones moved to New York City to earn a master’s degree in theatre design from New York University, where she now teaches graduate-level set design at the Tisch School of the Arts.

Jones won’t quickly forget the night of June 13, 2010. At New York’s Radio City Music Hall, in front of more than 5,900 spectators — including actors Denzel Washington and Catherine Zeta Jones in the front row — and millions watching from home, the presenter announced: “The Tony Award for Best Scenic Design of a Musical goes to . . . Christine Jones.”

Jones had been instructed that she only had a minute and 55 seconds from the moment her name was called, so she darted onstage and nearly knocked the camera operator down. She then dedicated the award to “Dallas Roberts, the love of my life and the father of my children, and Michael Mayer, the love of my other life and father of my other children. Michael, you are the Jesus and the Judy of Broadway,” she added, referring to the American Idiot character Jesus of Suburbia and a Judy Garlandinspired musical they had also worked on together. 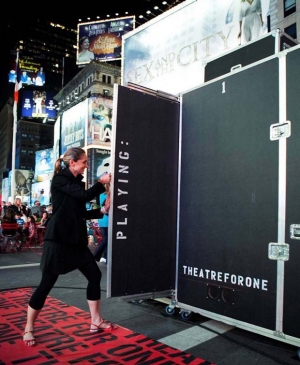 Broadway musical designer Christine Jones stepping into her Theater for One in Times Square.

Jones’s Tony now sits on a shelf in the East Village apartment she shares with Roberts and their sons Pilot, five, and Ever, three. She’s supposed to send the award to be engraved with her name but hasn’t gotten around to it yet. Although she has good reason.

Aside from being a full-time mother, part-time professor and set designer, Jones also has been working on a project she created on her own, called Theatre for One. The project brings one actor, musician or dancer to perform in front of one audience member in a theatre the size of a booth, nine feet high by four feet wide. “I’m always thinking about the relationship between the actor and the audience and I wondered what would happen if I distilled it to the most pure and intimate form,” Jones says. She then took the booth to Times Square for 10 days this summer, staging dancing, music and acting shows for six hours each day.

There is one routine Jones says she’ll never forget. “[Green Day front man] Billy Joe Armstrong did six performances, doing one or two songs per person,” she says. “Some people didn’t know who he was but one person just flipped out. When he sat down and Billy Joe walked in on the other side of the panel singing ‘Know Your Enemy,’ the whole booth started shaking because the audience member was pounding the walls. He was so excited; he came out crying and shaking everyone’s hand. It was the best day of his life.”

Jones, who’s now preparing a touring version of American Idiot along with a Broadway-bound Tony Kushner play, clearly thrives on those connections that only theatre can bring. Whether she is satisfying one audience member in a booth in Times Square or the 1,700 viewers nightly at American Idiot’s St. James Theater, the punk rock set designer says, “I live for those unexpected moments.”