Christophe Guy — a respected administrator, engineer, professor and researcher who is well-known within Quebec and Canada — has been appointed Concordia’s vice-president of Research and Graduate Studies. His five-year term begins on August 1, 2017. 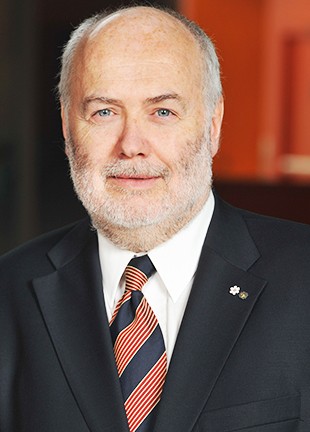 Since June 2007, Christophe Guy has been chief executive officer (CEO) of the Ėcole Polytechnique de Montréal, one of Canada’s largest engineering schools. Prior to this position, he was the chief research and innovation officer at the institution.

“Christophe is a leader in research and innovation who will build on our momentum to double our research,” says Concordia’s president Alan Shepard, referring to the university’s strategic directions.

“He has the depth and breadth of knowledge and experience as well as passion for higher education. A skilled and engaging communicator, he understands the university sector, and Quebec and Canadian research cultures. He has a strong track record in expanding research funding opportunities and developing collaborative partnerships with industry and other external partners.”

Under Christophe Guy, Polytechnique Montréal has become a leader in Canadian engineering research and innovation with increased industry partnerships and a large number of Canada Research Chairs.

“My decision to join Concordia is based on several factors, including its growing reputation nationally and internationally as an innovative and dynamic research and knowledge-creation institution,” says Christophe Guy, who was recently named a Chevalier de l’Ordre des Palmes académiques, one of France’s highest academic distinctions.

A strong advocate for technology transfer, Christophe Guy has participated in, or supported, the startup and development of Quebec-based companies that have resulted from academic research.

He co-founded Odotech Inc. with Thierry Pagé, one of his former graduate students in 1998. This spin-off company from Polytechnique Montréal specializes in the measurement and control of odours.

He is a member of several boards of directors, including the Quebec Consortium for Industrial Research and Innovation in Medical Technology, Université de Technologie de Compiègne in France, the Montreal Science Centre Foundation and the Network of Excellence in Engineering Sciences of the French-speaking Community, which he co-founded.

A Member of the Order of Canada, Officer of the Ordre national du Québec, and Fellow of the Canadian Academy of Engineering, Christophe Guy is the author or co-author of more than 110 scientific papers, and co-author of eight patents.

He holds a PhD in chemical engineering from Polytechnique Montréal and has been a full professor there since June 1996. He also held the position of director of the Department of Chemical Engineering from 1995 to 2001.

The president extends his appreciation

“I’d like to thank Justin Powlowski for taking on the VP role on an interim basis since last September,” says Shepard.

“He has done an outstanding job in overseeing the Office of Research, and will return to his current position as associate VP of Strategy and Operations.”

The president also extended his appreciation to the members of the search committee for their work that led to Christophe Guy’s nomination for this important role at Concordia.

The committee was chaired by Shepard, with Andrea Renaud as secretary.