February 8, 2017, Montreal/New York - At the Museum of Jewish Heritage in New York City, officials of the United States Department of Justice and the Federal Bureau of Investigation (FBI) returned the Dutch Old Master painting, “Young Man as Bacchus” by Jan Franse Verzijl (1599-1647) (download a high resolution version) to representatives of the Max and Iris Stern Foundation and its three university beneficiaries – Concordia University and McGill University in Montreal and Hebrew University, Jerusalem. It is the sixteenth painting to be returned to the beneficiaries.

Max Stern (1904-1987) was the German-Jewish owner of an important art gallery in Dusseldorf. With the rise of Nazism and his expulsion from the Reich Chamber of Fine Arts in 1935 due to his religion, the inventory of Galerie Stern and his personal collection was sold by force, with the remnants consigned to auction in Cologne two years later. “Young Man as Bacchus” had been identified in the Stern archives as the work of Salomon de Bray (1597-1664), though it is now attributed to Verzijl, a Dutch Caravaggist from Gouda. 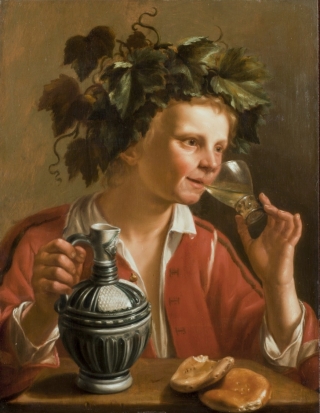 In 2014, through an article in the Italian publication, Corriere dell’Arte, the Max Stern Art Restitution Project’s lead researcher was able to confirm that the work was in the possession of Galleria Luigi Caretto in Turin.  The following year, the researcher learned that under a partnership arrangement with the Italian gallery, the painting was transferred to the Spanish gallery, Soraya Cartategui in Madrid, and would likely be displayed in New York.

Almost eighty years after its forced sale, in May 2015, the Holocaust Claims Processing Office (HCPO) of the New York State Department of Financial Services, acting on behalf of the Foundation, received an anonymous tip from a member of the art trade that the Verzijl was on display at the Spring Masters Fair.

The HCPO contacted the U.S. Attorney’s Office for the Southern District of New York and informed them of the painting’s history and location, which prompted them to reach out to the FBI for immediate action. The FBI then swiftly acted to seize the painting at the fair and begin negotiations with the gallery. The Luigi Caretto gallery voluntarily waived their claim of ownership to the painting to allow its return to the Max and Iris Stern Foundation.

FBI Special Agent in Charge Michael McGarrity says, “Works of art hold a special place in our society. Likewise, facilitating the return of stolen and missing works of art to their rightful owners is held in high regard among art crime investigators at the FBI.  Today, we are proud to return the Verzijl painting Young Man as Bacchus to representatives of the Stern Foundation after more than 80 years.”

"Over the last fifteen years, the assistance of law enforcement agencies in the United States, Canada and Germany has been invaluable to the advancement of the Max Stern Art Restitution Project”, says Clarence Epstein, senior director of Urban and Cultural Affairs at Concordia University. “Recognizing that forced sales of Nazi-era cultural property are equivalent to acts of theft remains the project’s guiding principle. “

This latest restitution was made possible thanks to the groundbreaking 2007 U.S. federal court decision in the matter concerning Franz-Xaver Winterhalter's “Girl from the Sabine Mountains” which Max Stern was forced to sell at auction in 1937. The judgment unequivocally declared as stolen property all of those paintings that he had to liquidate. In the years following this ruling, U.S. Immigration and Customs Enforcement (ICE), an agency of the Department of Homeland Security, was able to assist the Stern Foundation in the recovery of a Dutch and an Italian Old Master painting in the hands of members of the art trade.