History of the Chapel and Auditorium 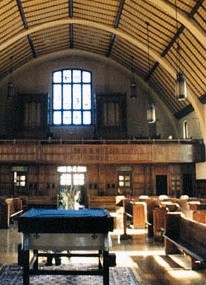 There has been a chapel on the west end campus since Loyola College first built there in 1916. The present Loyola Chapel building was designed by Architect Henri Labelle, and was blessed and officially opened on April 2nd, 1933. It was built in memory of Charles Francis Smith and Margaret McNally, the parents of Francis C. Smith, S.J. When Father Smith, a Loyola graduate, took his final vows of poverty in the Jesuit order, some of his family inheritance was put towards the building of the long-awaited Loyola chapel and auditorium. The auditorium was named in his honour after his death.

The stone decorations on the building include the Jesuit IHS emblem above the front door, the Loyola shield over the west entrance to the auditorium, and theatre symbols over the auditorium east entrance. The stained glass windows include the chancel window dedicated to the four Evangelists, and two rose windows in the transepts dedicated to the Sacred Heart (west side) and the Virgin Mary (east side).

On May 9, 1999, the Loyola Chapel Community consecrated a new altar in the Loyola Chapel. The table is just over forty inches square and the frieze consists of four panels of walnut hand-carved by retired chaplain and artist, Robert Nagy.

Schedule of Eucharist (Roman Catholic) in the Loyola Chapel

More about the Chapel's history