Dr. Max Stern and his Gallery and Art Collection from 1933-1945 and after World War II

In 1913 Julius Stern and his wife Selma founded the “Galerie Julius Stern” in Düsseldorf. Originally an art dealership, it also became an auction house in 1931. Their only son, Dr. Max Stern, entered the gallery in the fall of 1928; his sister Hedwig was already working there since 1920. Due to his father’s illness Max Stern took over the management of the gallery in April 1933. With his father’s death on October 31, 1934, Max Stern inherited the business and the two buildings on Königsallee 23-25, in which the Stern family lived and had its dealings. Both his mother and sister continued in the gallery until it was closed (December 1937) or they had emigrated (Hedwig in 1936). 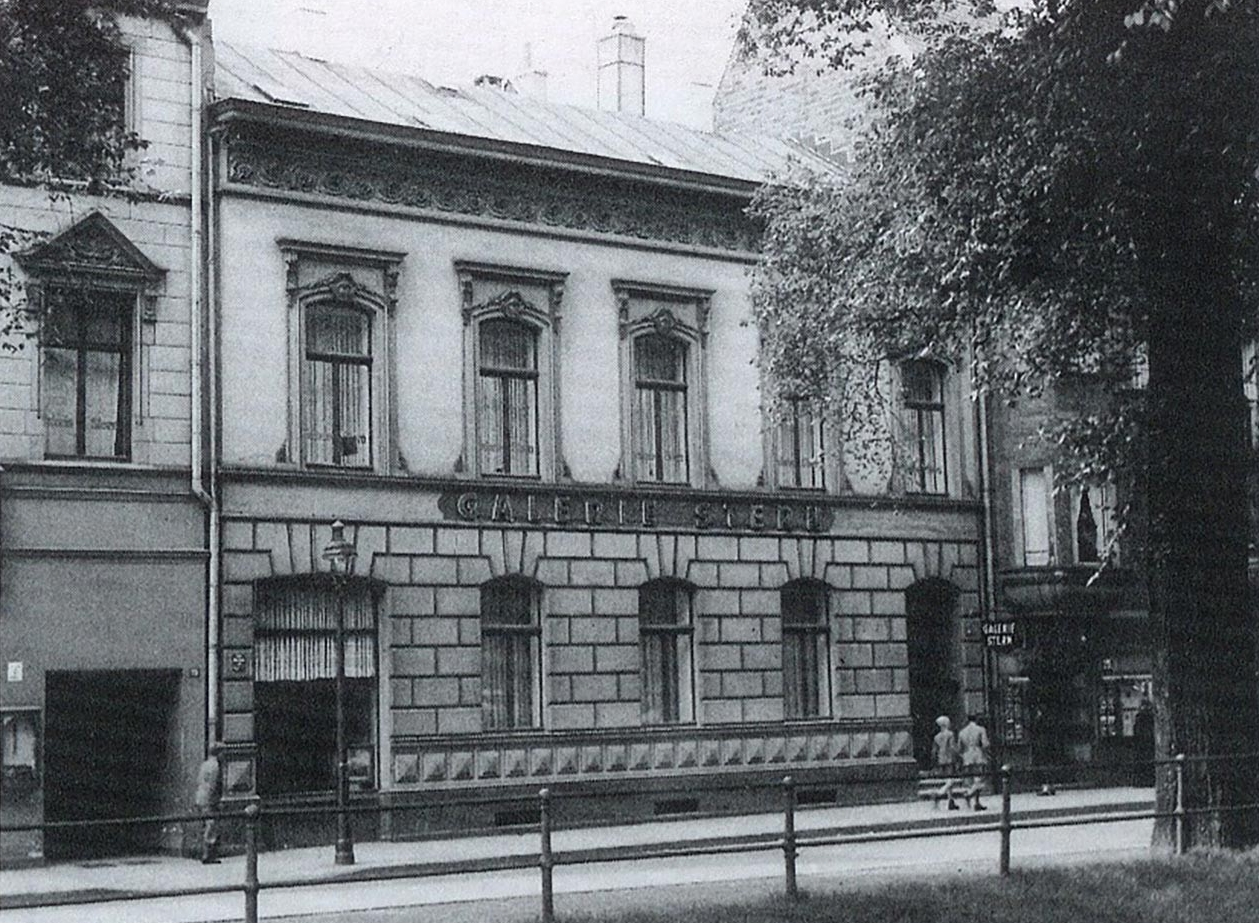 The Reichskulturkammer (Reich Chamber of Culture) (“RKK”) was created by a law dated September 22, 1933. Its purpose was to encourage all forms of artistic creation from the Nazi point of view. The RKK was closely linked to the Ministry for Public Enlightenment and Propaganda under Joseph Goebbels. It was divided into several subordinate chambers. One of them was the Reichskammer der bildenden Künste (Reich Chamber of Fine Arts) (“RKdbK”). Membership in these chambers was compulsory. Persons denied membership were in effect excluded from their professions.

Before 1933 German art dealers like Max Stern were organized in the “Bund Deutscher Kunst-und Antiquitätenhändler e.V.“ in Munch. This association was dissolved by the Nazis and replaced with the RKdbK.

After the war Max Stern reported that for racial reasons they were forbidden in 1933 to hold auctions and therefore started organizing exhibitions with catalogues in the gallery in 1934.

On August 29, 1935 Max Stern received a letter from the president of the RKdbK in Berlin, informing him that he does not fulfill the requirements for membership in the RKdbK and is therefore prohibited from the further practice of the profession of an art dealer. He was given 4 weeks to sell or dissolve his business.

On September 19, 1935 Max Stern was informed by the same office that (in response to his appeal) the order from August 29, 1935 would be suspended until the completion of additional investigations. On July 29, 1936 Max Stern received another letter from the RKdbK, confirming the decision of August 29, 1935 and giving him 3 months to sell his gallery; thereafter he was prohibited from being an art dealer.

Max Stern’s Berlin lawyer Carl Haensel was notified on November 4, 1936 that Max Stern had a final deadline for selling his gallery until November 21, 1936. A letter from the RKdbK, dated December 12, to the Chief of Police in Düsseldorf, indicated that the November 21, 1936 deadline was extended by another 2 weeks. The next letter from the president of the RKdbK to Max Stern is dated September 13, 1937. Max Stern was told that a) Prof. Kötschau, Düsseldorf cannot take over his business, b) he was given until September 30, 1937 to dissolve his firm, c) the order from August 29, 1935 remained in effect, d) after September 30, 1937 he would not be allowed to deal in cultural property in any form, e) he was advised to sell the cultural property still in his possession through an art dealer or auctioneer who is a member of the RKdbK, and f) this would be the final order, any further appeals are useless.

Many months before this letter of September 13, 1937, Max Stern seems to have lost all hope to save his gallery or career in Düsseldorf, because he sold the two buildings on Königsallee 23-25 to the Allianz insurance company on March 31, 1937.

Based on the available historical documents, Max Stern had a final, final deadline of December 15, 1937 to dissolve his gallery. On December 23, 1937 the regional RKdbK office in Düsseldorf wrote to the Gestapo in Düsseldorf, which over the years was asked by the RKdbK to “monitor” the execution of their orders, to verify that Max Stern was in compliance with the order of the president of the RKdbK and had ceased being an art dealer as of December 15, 1937. Also on December 23, 1937 Max Stern left Nazi-Germany and traveled to Paris with nothing but a suitcase in his hand. A few weeks later he continued to London, where he joined his sister Hedwig.

The fate of the gallery inventory as of November 13, 1937 and the private art collection

There seems to be little doubt about the history of the liquidation of the stock remaining in the gallery as of November 1937. Max Stern took the remaining inventory of the Galerie Julius Stern to the Cologne auction house Lempertz, where it formed their sale No. 392 on November 13, 1937. There is no indication that the 228 paintings offered in that sale belonged to anybody else but Max Stern.

It could not be established with certainty after the war how many of those 228 paintings actually sold at Lempertz. Lempertz had lost all its business records during an air raid. There was agreement during the post-war proceedings that most of them were auctioned off. Some clearly did not sell, went back to the Julius Stern gallery in Düsseldorf and where offered for sale until December 15, 1937 in Max Stern’s final catalogue No. 9.

Unfortunately, the Lempertz and the Stern catalogues are practically identical, which means they can not be used to determine what was sold when and where. Max Stern explained this confusing situation after 1945 by saying that he did not have the time after the Lempertz auction to create a new catalogue for the remaining paintings, but simply used the Lempertz catalogue and had a new cover sheet printed for the sale at his gallery.

Regardless of the time and location of the sale of these 228 paintings, including the question whether they actually all sold at Lempertz or Stern, Max Stern left Germany in December 1937 without any of these paintings and none of them were ever sent to him or his family members while in exile.

Unlike the documentation on the final inventory of the gallery, the details on Max Stern’s private art collection are less well documented.

The first relevant Nazi document is a letter dated May 11, 1939 from the “Prüfungsstelle für Kulturgut jüdischer Auswanderer beim Landeskulturwalter Gau Düsseldorf” (Office for Review of Cultural Property from Jewish Emigrants at the State Cultural Affairs Administrator for the Düsseldorf Region) to Herbert Liebermann, Düsseldorf, an attorney who at that time could not call himself an attorney anymore, representing the interests of Max Stern, informing him that they are withholding 5 named pictures from the “paintings collection Stern”. The pictures, at a fixed price, were supposed to be sold to or through the Gemeinschaft rheinischer Künstler und Kunstfreunde e.V. (Association of Artists and Friends of the Arts from the Rhineland) and Herbert Liebermann was asked to sign the attached authorization. He was also told to deliver the paintings at the Städtische Kunsthalle (Municipal Art Museum) Düsseldorf.

On June 30, 1939 Lempertz sent a letter to Max Stern in London, informing him that Winterlandschaft or Winter Landscape by v. Bemmel had been sent to the Städtische Kunsthalle on behalf of the RKK. On August 3, 1939 the shipping agent Josef Roggendorf wrote to Max Stern in London that the paintings Selbstbildnis or Self Portrait by Gebhardt and Mühle or Mill by Knibbergen were sent to the Gemeinschaft rheinischer Künstler und Kunstfreunde today. The 3 paintings referred to in the June and August letters seem to be 3 of the 5 paintings from the May 11, 1939 letter.

Two Gestapo documents from January and February 1941 shed further light on the fate of Max Stern’s private collection. On January 22, 1941, the Gestapo Cologne reported to the Gestapo Düsseldorf that it had seized 13 pictures belonging to Max Stern at Josef Roggendorf. Nothing belonging to Max Stern could be found at Lempertz. On February 28, 1941 there is another letter exchanged between the same Gestapo offices. The Gestapo in Cologne wrote that on February 26, 1941 the 13 pictures were auctioned by the auctioneer Hufschmidt in Cologne. The pictures sold for a total of RM 7,320. The letter also refers to an attached inventory of the pictures. Unfortunately, this inventory seems to be missing from the archives.

The above Nazi documents seem to indicate that there should have been at least 18 pictures in the private collection of Max Stern. This cannot be said with certainty, however, since we have no details on the 13 seized pictures.

It was not until after the war that Max Stern in his claim for restitution from December 1948 submitted a list of 20 paintings and prints that he referred to as the lost art collection. It is this list that became the foundation of Max Stern’s post-war art recovery efforts.

On December 27, 1948 Max Stern filed a “Claim for Restitution of Property which has been Subject to Transfer in Accordance with Paragraph I of General Order No. 10” with the Zentralamt für Vermögensverwaltung (Britische Zone) in Bad Nenndorf (Central Office for Property Control – British Zone) on December 27, 1948. The basis for such a claim was Military Government Law No. 59 for the British Zone of Occupation. Besides lost real estate and bank accounts he claimed the loss of 20 paintings and prints which are individually listed in the attachment to the claims form. For each picture he provided the name of the artist, title, measurements and medium.

In order to publicize some of the losses from his private collection, Max Stern placed an illustrated advertisement in the August 1952 issue of the German art magazine “Die Weltkunst”. The following listing of settlements and recoveries can mostly be linked to this publication; in almost all cases someone responded to the advertisement and provided the initial information on the last known location of the paintings.

During the hearing the museum argued that the paintings were never in their possession or under their administration. The RKK and the Gestapo at that time seized pictures from Jewish owners, which were temporarily stored at the museum. The museum was not allowed to record the movement of these pictures and therefore has no knowledge of the whereabouts of the 3 paintings.

The reviewed historical records on Max Stern do not reveal any additional efforts or leads regarding these 3 paintings.

The reviewed documents indicate that the Heinemann gallery was eager to help resolve the matter by offering another painting in exchange.

Besides these settlements, Max Stern must have recovered 2 paintings by Dirk Hals and Salomon Ruisdael with the help of the Canadian military forces in Germany before he filed his restitution claim on December 27, 1948.

Otherwise the reviewed documents give no indication that any other pictures from the list of 20 were recovered or pursued after the war.

There is very little information on the question whether Max Stern, his mother or his sisters were able to take any works of art out of Germany when they left. This question would only be of interest, if one wanted to document lost works of art that Max Stern did not claim after the war.

What Max Stern did claim and litigate with success after the war was “Verschleuderungsschaden” pertaining to the selling of the gallery inventory. (Reparations Chamber at the Regional Court Düsseldorf, February 24, 1964 – 26 0 (Entsch) 454/62) This claim for damages was based on the argument that the paintings were sold at rock-bottom prices in November and December 1937 and would have fetched much more if they would have been sold over time in the Stern gallery and under different circumstances. But this was a claim for damages against the German Reich and its successor and had nothing to do with the actual recovery of the lost art.