An estimated 80 per cent of the world’s cargo is transported via ship-borne containers — a method that has soared in use in the decades after World War II. The efficient, cost-effective method of packaging and moving goods across the world’s oceans boomed with the globalization of trade, experiencing a near 20-fold increase in container tonnage in the past 40 years. An estimated 100 million tons were shipped by container in 1980. In 2020, that number has reached a staggering 1.85 billion tons.

However, not all this cargo makes it to market. Fires, collisions, groundings and other seaborne accidents can lead to containers spilling overboard and sinking to ocean floors where they and their contents pollute the marine environment.

In a new paper published in the Journal of Cleaner Production, a group of Concordia researchers under the supervision of Chunjiang An review the state of marine pollution from container ship accidents. The study investigates the risks they pose, the current policies and strategies around them and the regulations that cover reporting and cleanups. They found that despite the existence of international protocols, risks are often overlooked, and existing regulations around maritime cargo have significant deficiencies.

“We found that there is very little research into the issue of lost containers, because there is no obligation for ship owners to report them if there are no harmful substances inside,” says the paper’s lead author, PhD student Shuyan Wan. “However, they can contain products that are not listed as harmful, such as plastics, that when exposed to sea water can release substances that damage the marine environment.” 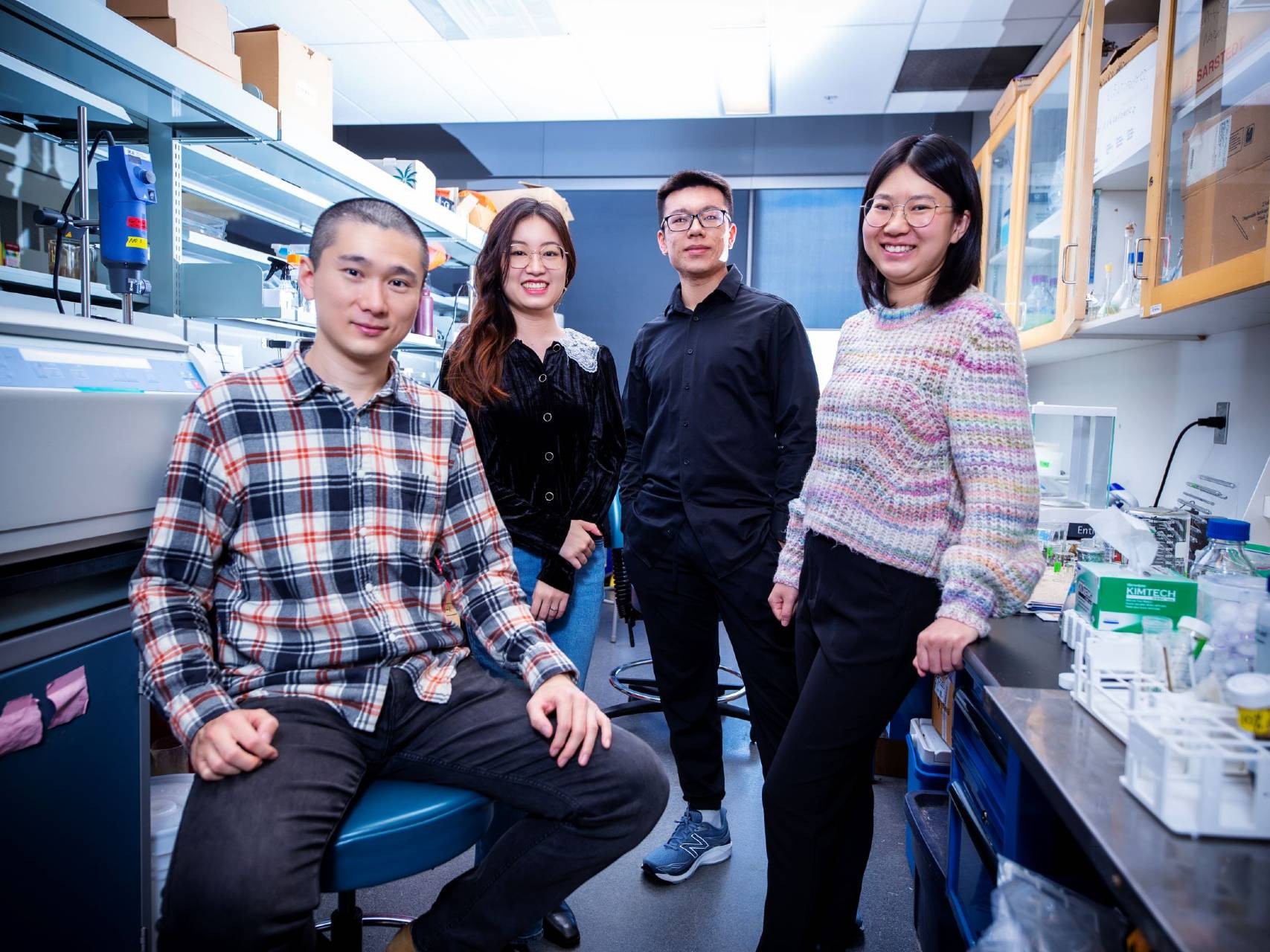 Shuyan Wan, Xiaohan Yang, Zhaonian Qu and Xinya Chen (left to right): “There is very little research into the issue of lost containers, because there is no obligation for ship owners to report them if there are no harmful substances inside.”

As the researchers point out, the existing regulations around container ship cargo are comparatively lax, as is oversight. There is little international supervision of marine pollution beyond national jurisdictions, explains Wan, and the list of harmful substances named by MARPOL, the principal governing convention of maritime pollution prevention, is badly in need of an update.

Making matters worse, the sheer volume of maritime containers in use makes inspecting them all thoroughly difficult and allows shippers to mislabel a container’s contents with relative impunity. The researchers point to the results of a 2008 inspections program that found that 34 per cent of inspected units had some sort of deficiency.

This lack of rigour does not just negatively impact safety: it also affects the validity of scientific research into the issue. A lack of data makes the adoption of new regulations more difficult. “It creates a vicious circle that makes things worse and worse,” Wan says.

Off the boat, into the food chain

An draws a sharp contrast between the little-studied field of container-borne pollution and the more mature field of oil spill prevention and clean up.

“There are many regulations around oil spills, even for responders,” says An, associate professor in the Department of Building, Civil and Environmental Engineering and the Concordia University Research Chair in Spill Response and Remediation. But there is little such expertise to deal with other sources of pollution, such as the 1,680 tons of plastic nurdles that swamped Sri Lanka’s shoreline last year after the container ship X-Press Pearl caught fire and sank. Experts attending the recent International Oil Spill Science Conference also raised the particular concern of such container ship accidents.

“People had no idea how to respond. And the nurdles that did not reach the shoreline stayed in the ocean water, with the potential of eventually entering the food chain.”

The researchers write that there is an urgent need to increase awareness about the risks posed by the emerging threat of container-based pollution, especially in the maritime industry but also among the public. A greater understanding of the risks will, they believe, lead to improvements in industry standards, international cooperation, spill management and high-quality scientific research.

The paper’s co-authors are PhD students Xiaohan Yang, Xinya Chen and Huifang Bi and master’s student Zhaonian Qu of Concordia, as well as Baiyu Zhang of Memorial University and Kenneth Lee of Fisheries and Oceans Canada.